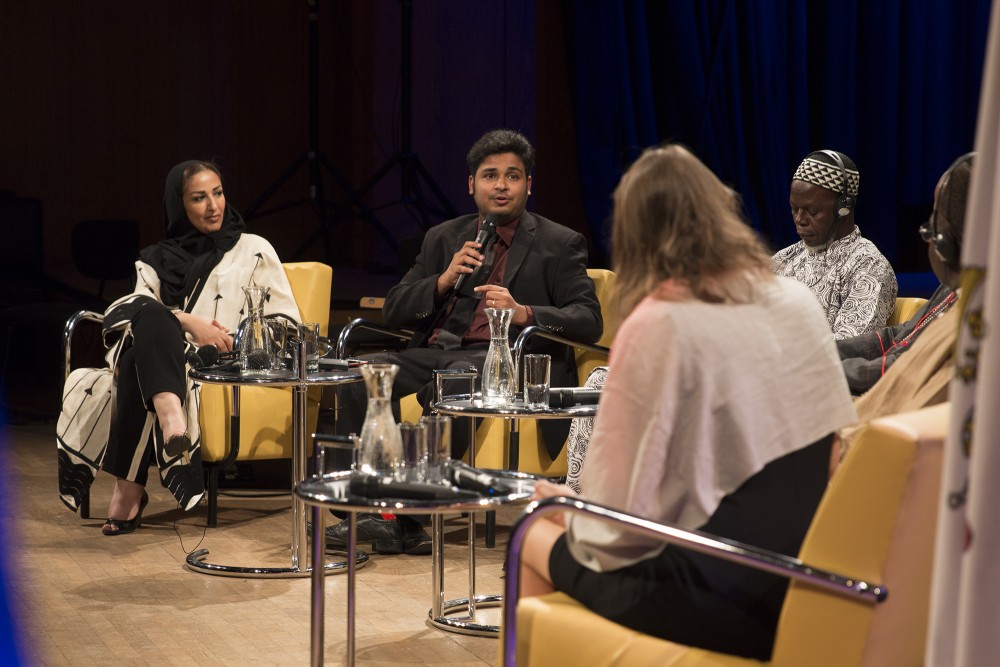 Interreligious Dialogue is much more than conversation, debate or discussion. It is an important tool for preventive diplomacy, peacebuilding, and conflict resolution. It has value for policymakers, religious leaders, and civil society. When done right, with expert facilitation, it can heal emotional and psychological trauma. At the same time, interreligious dialogue can be difficult, risky, and sometimes even dangerous, and requires skill and experience to perform correctly.

These were only some of the findings of yesterday’s public event at the RadioKulturhaus, a heritage building in Vienna where event partner, Austrian National Radio (Oe1), hosted the evening of dialogue. The event was organized by the International Dialogue Centre (KAICIID), in partnership with the Austria Kultur/ The Austrian Federal Ministry for Europe, Integration and Foreign Affairs, the Holy See, the Kingdom of Saudi Arabia Ministry of Foreign Affairs, and the Spanish Ministry of Foreign Affairs and Cooperation, representing the Centre’s Council of Parties.

Diplomats, media, leaders of religious communities, representatives of civil society and members of the interested public in KAICIID’s host city, Vienna, Austria, took part in the exploration of KAICIID’s work that is carried out around the world since its founding 5 years ago.

“We are uniting people against violence in the name of religion. More than 5 billion people on this planet are religious, thus their religious leaders have a huge influence on our world. Whether we want to end war, promote human rights, relieve poverty, or prevent discrimination, we need religious leaders to be part of the solution. So we try all over the world, to bring religious leaders into dialogue with each other, and with policymakers. Peace between cultures and nations cannot be reached without dialogue and peace between the followers of religions.”

The Secretary General also expressed the Centre’s gratitude to the people of Vienna and Austria, and his hope that the Centre’s work could contribute to Vienna’s well-deserved reputation as the home of dialogue.

The audience learned from the representatives from Austria, the Holy See, Saudi Arabia, and Spain about the initiatives that led to the founding of KAICIID, an intergovernmental organization with a unique mandate.

Teresa Indjein, Director General of the Section for International Cultural Relations from the Austrian Federal Ministry for European and International Affairs, spoke with pride of the Centre’s home in Austria: “Austria and the city of Vienna in particular has a long tradition of hosting international organizations. It is a place for dialogue, and dialogue should always be an intrinsic part of diplomacy. Dialogue is a very compassionate way of communicating and when it works it will bring about change, understanding and can even heal wounds. That in a nutshell is KAICIID’s mandate. KAICIID bridges a gap in international peacebuilding and that is why we as Austrians are proud to host the Centre.”

From Dr. Khalid Al-Jindan, Saudi Arabian Ambassador to Austria, the audience learned of the historic 2007 meeting between the Custodian of the Two Holy Mosques, the late King Abdullah, and Pope Benedict XVIth, and their shared vision of a better future for all people. This meeting led to the founding of KAICIID with the support of Austria and Spain, and the international community.

The Vatican’s perspective was provided by Bishop Miguel Ayuso, secretary of the Pontifical Council for Inter-religious Dialogue, and KAICIID Board member: “Pope Benedict as the head of the Catholic Church felt in conscience that something has to be done in response (to the late King’s invitation to cooperate) and therefore he supported the initiative and entrusted it to the Pontifical Council for Inter-Religious Dialogue to initiate dialogue for the creation of the Centre. The Holy See has seen in KAICIID another initiative with the vision the Church wants for all humanity: a constructive dialogue for anyone, anywhere, anytime. A dialogue open to all. A dialogue that is inclusive and based in respect and friendship.”

On behalf of Spain, Belén Alfaro Hernández, Ambassador of Interreligious Dialogue, Ministry of Foreign Affairs of Spain, described the benefits that nations can derive from KAICIID’s work: “Interreligious dialogue is a tool for preventive diplomacy, and the prevention of extremism. Governments cannot act alone. This is a common endeavour. Religious leaders, intergovernmental organizations, civil society representatives need to work together towards this common goal.”

From Nigeria, Sheikh Abdullahi Maraya described how dialogue has changed his state of Kaduna: “In Nigeria, from 1988-2015, thousands of lives have been lost in my state of Kaduna, but today, due to the intervention of KAICIID and other partners, from 2017 to this day only 20 lives have been lost. Today people of diverse religious identities Imams, Christian clergies are visiting each other: this success is attributable to dialogue.”

Amal Al Moallimi from the National Dialogue Centre (KACND) in Riyadh, Saudi Arabia spoke about the experience of the KACND in using dialogue as a capacity-building tool to help women be more involved in society in Saudi Arabia, because, as she said, “women are 50% of the population, and they are raising the other half.”

These practical examples were followed by a panel discussion where some of the multireligious Board of KAICIID provided an understanding of how dialogue is perceived in their respective religious traditions. Dr. Kezevino Aram, from India, described how dialogue, for her, is a means of connecting oneself to the divine grace. “Dialogue is beyond mere conversation, or even working together towards a shared purpose. It is a call to live the truest form of our tradition.”

Metropolitan Emmanuel of France said: “Dialogue is a call, and also a communication. And when we use the word dialogue, it also refers to a communication between humanity and the Divine.

Chief Rabbi David Rosen described dialogue as “the opportunity to genuinely encounter the other, to engage the other at the deepest level of his or her identity and through that to encounter that which transcends that which is human. For the religious person, dialogue is a religious experience. There is something pure and spiritual in the encounter itself. Dialogue is a tool for peacebuilding yes, but it is also much more than that.”

Dr. Mohammed Sammak said that dialogue does not eliminate diversity, but celebrates it. “Dialogue is the art of searching for the truth in the point of view of the Other.”