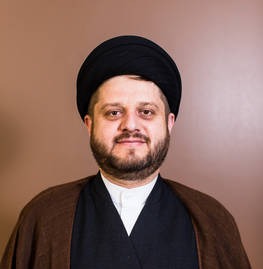 Zaid Bahr Al-Uloom is a PhD candidate in Islamic sciences at the Islamic University of Lebanon, and a researcher at the Bahr al-Uloom Institute in Najaf, Iraq.   He was born in Baghdad in 1981 and graduated from high school in Najaf in 1999. He joined Al Hawza (a religious academy) in 2001 and during his Hawza studies he also began academic studies in the Department of Holy Quran and holy hadiths, Figh College, University of Kufa. He earned his master’s degree from the same university in 2014.

Zaid researches a variety of topics including Holy Quran sciences, singing in Al Quran and in the Sunna,  the role of the Quran in mind building, etc. He has participated in many seminars, workshops and conferences within and outside Iraq on IRD, peacebuilding, and coexistence.