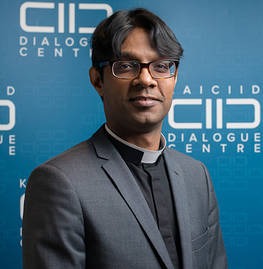 Rev. Dr. Peniel Jesudason Rufus Rajkumar is the Programme Executive for Interreligious Dialogue and Cooperation with the World Council of Churches, Geneva. His focus is on building relations of trust and respect with followers of Eastern religious traditions, primarily Hinduism and Buddhism.

Rajkumar completed his PhD in applied theology and ethics from the University of Kent at Canterbury. Rajkumar is an ordained Anglican Priest and served as a priest in the Diocese of London until May 2008. Following his service, he became Associate Professor of Christian Social Ethics and Director of Field Education at the United Theological College in Bangalore, India, while being an associate minister of the Church of South India.

Rajkumar has published widely in the areas of interreligious dialogue, Christian ethics, mission, religious fundamentalism, post-colonialism and world Christianity. His works include Challenges of Transition: Religion and Ethics in Changing Contexts (Delhi: ISPCK, 2008), Dalit Theology and Dalit Liberation: Problems, Paradigms and Perspectives, (Ashgate, 2010) and Doing Dialogue ‘Other-Wise’ (WCC, Forthcoming), and as editor the books: Asian Theology on the Way, (London: SPCK, 2012), Foundations for Mission (Oxford: Regnum, 2013), Mission At and From the Margins: Patterns, Protagonists and Perspectives, (Oxford: Regnum, 2014) and Many Yet One: Multiple Religious Belonging, (Geneva: WCC, 2016).

Rajkumar has been involved in an advisory capacity with the Christian Collective for Justice, the World Student Christian Federation and the Board of Theological Education of the Senate of Serampore and the National Council of Churches in India.