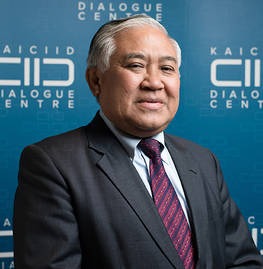 Prof. Dr. Din Syamsuddin is a prominent Muslim leader from Indonesia. He is a professor of Islamic Political Thought at National Islamic University, Jakarta. He served as President of Muhammadiyah, the largest modernist Islamic organization in Indonesia from 2005 to 2015, as well as President of the Indonesian Council of Ulama (MUI) during 2014-2015, and now (2015-2020) is Chairman of its Advisory Council. He has been active in interfaith dialogues and cooperations, as he initiated the creation of and becoming Presidium of Inter Religious Council - Indonesia,  He is currently acting as President-Moderator of Asian Conference of Religions for Peace (ACRP), Co-President of Religions for Peace International, as well as Chairman of Center for Dialogue and Cooperation among Civilizations (CDCC), and Chairman of World Peace Forum based in Jakarta. He is also a member of the “Group for Strategic Vision Russia - Islamic World”, and a member of Leadership Council of the United Nations Sustainable Development Solution Network (UNSDSN). He recently initiated the creation of Indonesia's Movement to Save the Earth (Indonesia Bergerak Selamatkan Bumi) and acts as Chairman of the Movement's Steering Committee. He obtained both Master and Doctoral degrees from Interdepartmental Program in Islamic Studies, University of California Los Angeles (UCLA), USA, in 1998 and 1991 consecutively.