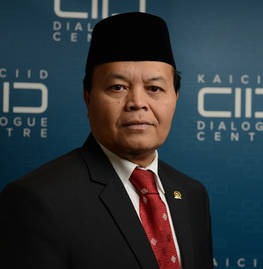 Vice Chairman, People’s Consultative Assembly of the Republic of Indonesia

Dr. Wahid is also a member of the Constituent Council of the Muslim World League besides actively leads some organizations at the regional and national level. Wahid has completed his Lc, MA, and doctorate degree in the Islamic University of Madinah in 1992. He has been lecturer in the Post-graduate School of State Islamic University in Jakarta and other respected universities in Indonesia. Currently, he still routinely delivers khutbah during the Friday prayer at the Istiqlal National Mosque. He frequently appears on various television channels, not only in his capacity as a politician but also as a Muslim scholar who delivers public lecture on subjects such as religion and nationhood, dialogue among religions and civilizations, Islamic political philosophy, religious practices in pluralistic nations.