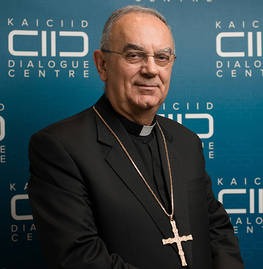 Bishop Camillo Ballin is an Italian Roman Catholic bishop, writer, missionary, and educator who is the Roman Catholic Vicar Apostolic of the Apostolic Vicariate of Northern Arabia. He was ordained Priest of the Comboni Missionaries of the Heart of Jesus on March 30, 1969. He began his priestly apostle in St. Joseph parish in Cairo in 1971, and then he served as Parish Priest from 1972 to 1977. From 1977 to 1980, Ballin was located first in Kaslik, in Lebanon, and then the Pontificio Instituto Orientale in Rome, for his Licentiate in Oriental liturgy. His research was the Evening Prayer in the Coptic Church. He was Studies Director at the Institute of Theology in Cairo from 1981 to 1982 and professor of Oriental Liturgy from 1982 to 1990. In the same time he was also provincial superior of the Comboni Missionaries in Egypt.

In 1990, he moved to Sudan and founded a training institute for religion teachers. From 1997 to 2000, Ballin returned to Rome for his doctorate on Church history. His research was on the history of the Church in Sudan during the Mahdiyyah era (1881-1898) and how the Jews and Christians lived during that period of fundamentalist Islamic regime. In 2000, he was appointed Director of the Dar Comboni Center of Arab and Islamic Studies in Cairo, Egypt. On 14 July, 2005, Pope Benedict XVI appointed Ballin as the Apostolic Vicar of Kuwait. In 2011 the Holy See gave Bishop Ballin the responsibility of Bahrain, Kuwait, Qatar and Saudi Arabia. Ballin resides in Awali, Bahrain.