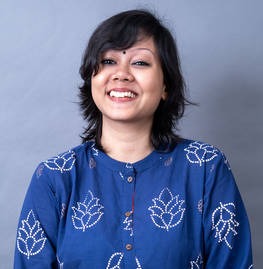 Sohini Jana, a post-graduate in English Literature, entered the field of interreligious dialogue when she took to listening to the ‘other’ as if she was reading another novel, another story.

Sohini is the acting Chapter President for the India chapter of a non-profit organization based in the United States called the Euphrates Institute. She identifies herself as a bridge-builder. In the light of building bridges, she had spearheaded a successful effort to bring Americans (mostly Christians) in conversation with South Asian Islamic studies scholars from the Centre of Peace and Spirituality in order to combat islamophobia and promote Islam as an ideology of peace for the post-scientific era. She had also actively campaigned to promote the culture of interfaith interactions prevalent in Kolkata by interviewing members of the Youth Association of a local club in the Mohammad Ali Park region. She had hosted a concert in collaboration with the Society for Social Regeneration and Equity on the occasion of Daniel Pearl Foundation World Music days to promote interfaith harmony through music and theatre. Recently, she had also delivered alive session training to students of the Institute of Management Sciences in Peshawar, Pakistan on Interfaith Harmony.

She has won the Euphrates Institute scholarship for her service in the field of interfaith harmony targeted towards “turning the other into a brother”. Her motto remains to bring the world one step closer to witnessing the unity of all existence.