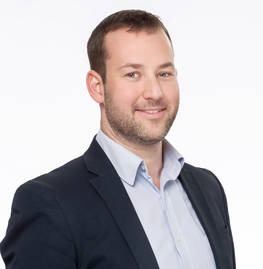 Rabbi Elhanan Miller is a journalist, researcher and Jewish law student from Jerusalem. Educated in the Modern Orthodox school system, he will be ordained an Orthodox rabbi in September 2019 by Beit Midrash Harel, an egalitarian rabbinical seminary. Miller graduated with a master’s degree in Islamic Studies from the Hebrew University, Jerusalem, and is fluent in English, Hebrew, Arabic and French.

He began working as a journalist in 2010 and joined the founding team of the Times of Israel in 2012, where he served as the Arab affairs reporter. He was a recipient of the Richard Beeston Bursary for journalism with the Times of London in 2016.

As a student, Miller was active in his university debating society and took part in several interreligious dialogue programs with Muslim and Christian Palestinians in Jerusalem. In July 2017 Miller founded ‘People of the Book’, an online initiative geared at teaching the principles of Jewish faith to Muslim audiences through animated videos. The initiative has garnered millions of views across the Arab world and has been widely reported on by American and European media.

His motto is: "It is not your responsibility to finish the work, but neither are you free to desist from it." (Pirkei Avot, 2:16).