A Common Word Among the Youth (ACWAY)

Misunderstanding, mistrust, misrepresentation and conflict between religious and cultural groups cause suffering and disruption in too often around the world. In some cases, the difficulties and frustrations faced by younger generations significantly exacerbate the situation. KAICIID is aware that each instance of inter-group tension has its own local dynamics and specific challenges to solve, which cannot be adequately addressed with generic solutions or from afar. Moreover, initiatives which seek to foster Interreligious/Intercultural Dialogue (IRD/ICD) often focus heavily on engaging religious leaders whose influence over young people and understanding of their concerns can be patchy.

By contrast, young people, whose contribution to interreligious and intercultural relations has the potential to be innovative and long-lasting, also have the advantage of being visible to and influential towards their peers via social media and by involving them in their endeavours locally. However, as they lack experience of other religions, IRD, facilitation and project management in general, they need a course which gives them that experience and equips them with the skills and ongoing support they need to begin as interreligious/intercultural activists.

“ A Common Word Among the Youth” was a programme developed by KAICIID in cooperation with Right Start Foundation International (RSFI), in order to empower enthusiastic young activists to work where they are and thus to have a sustainable impact for as large a number of communities as possible. For KAICIID, the resulting programme constituted one of the first of the Centre’s ‘ metamorphic’ projects for young leaders, accompanying participants from the point of having little or no knowledge of Interreligious Dialogue or even other religions, to being equipped and active agents for IRD. It was in many senses a one of the precursors to KAICIID’s now-signature annual Fellows Programme.

To launch ‘A Common Word among Youth’, KAICIID cooperated with Right Start Foundation International to design a programme which would have a potentially high and sustainable impact on grassroots communities all over the world, and which would produce stories via social media to inspire a wider audience and raise awareness of IRD.

Together, the collaborating organizations selected young people already engaged in relevant social projects in their own communities.  In December of 2015 a cohort of 85 young people from some 70 countries and diverse backgrounds gathered in a fully-funded, week-long set of trainings in Rabat, Morocco benefiting from the support and expertise of ISESCO, World Organisation of the Scouting Movement (WOSM) and Georgetown University. With a variety of trainers, the ACWAY participants learned about different religions and cultures and the concept of IRD, as well as practical project design and management skills. The intensive living and working experience laid the foundation of the network which, hosted by RSFI on social media channels, supported them for the following six months, during which each participant was committed to carrying out a self-designed project in his or her home community.

Since December, dozens of projects have been submitted and carried out, with RSFI monitoring and encouraging the young people, and making suggestions for improvement. In order to sustain ambition, KAICIID offered five awards of up to EUR 2000 to the most advanced project designs. The award winners’ projects are in progress in Africa and Asia, varying from intensive dialogues organized in different religions places of worship in Indonesia to joint religious advocacy- and shovelling-teams to clean drains and stop disease in villages in northern Ghana. 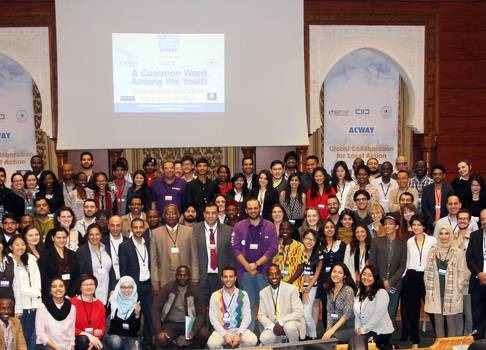 A Common Word Among Youth (ACWAY)