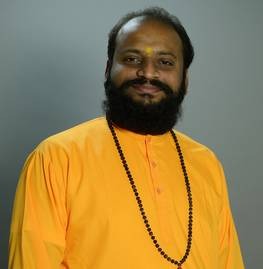 Swami Chidakashananda has studied Advaita Vedanta from 2005 to 2007. He completed a two year intensive Vedanta and Sanskrit course in India with Pujya Swami Tejomayanandaji, the global head of Chinmaya Mission, the foremost scholar of Sanskrit and Vedanta living today. Jagrat is the Acharya of Chinmaya Mission of Sri Lanka, He teaches Sanskrit to beginners, as well as Vedanta and Vedic chanting. He was educated at Hindu Colleges in Jaffna and Colombo and then graduated from University of Moratuwa, Sri Lanka in 2005. He was appointed Acharya at Jaffna in 2011, when the region had been at war for over thirty years. He joined the Jaffna District Inter Religious Council, which brings together representatives of Hinduism, Christianity, Islam and Buddhism. He is a member of the National Inter Religious Council. He lives his life simply, following the Chinmaya Mission’s motto: “To give maximum happiness to maximum people for maximum time”