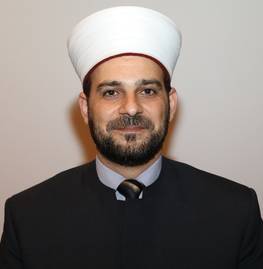 Sheikh Mohammad Ghaliah holds a master’s degree in Aqidah (Islam creed) and Islamic philosophy and a Bachelor of Arts degree in Da'wa and principles of religion. He currently works as a mufti at the General Iftaa department where he is in charge of preparing and delivering Fatwas via different means of communication.

He prepares and hosts the Iftaa department’s religious program "Ask the People of Remembrance" at Jordan Television, in addition to participating in other religious programs on different stations.

He has taken courses on enhancing interfaith dialogue and participated in local and international forums and conferences on countering terrorism and extremism. For instance he attended the Iftaa department’s conference entitled "Nullifying Suspicions of Extremism and Takfir, Peaceful Coexistence amongst Followers of Different Religions" at Prince Songkla University in Thailand.

Sheikh Ghaliah was nominated for the Best Public Employee award and was amongst the finalists.