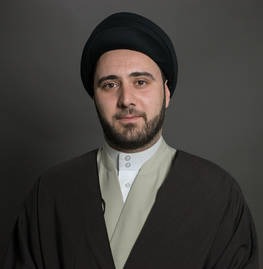 Sayyed Ali Mohammed Taqi Al-Khoei was born on 29th of September 1988, in the holy city of Najaf Al-Ashraf, Iraq, into the family of the Spiritual leader for Shia Muslims, Ayatollah Imam Sayed Abul-Qasim Al-Khoei. After the first Gulf War, the Shi'a uprising against Saddam Hussein's regime, and following the tragic death of his grandfather, Sayyed Ali was forced to leave Iraq for Iran due to the political unrest and the constant dangers that his family faced. Sayed Ali's father was also tragically murdered along with other members of his family by the Ba'thist regime in the summer of 1994. Shortly after the murder of his father, he migrated to Iran for four years and then migrated to the United Kingdom where he finished his academic studies. He later returned to Iran where he started his Islamic studies at the religious seminary in Qom. In 2010 he returned to his hometown to continue his studies and take up the position as lecturer in Jurisprudence at the Religious Seminary. He currently lives in Iraq where he is studying and teaching Fiqh and Osool. He is also in charge of the Interfaith Dialogue Desk at Al Khoei Institute.

Iraq’s cultural and ethnic diversity has become a basis for divisions among communities along religious, ethnic and linguistic lines. With this in mind, Sayyed Ali Khoei designed a community development and conflict resolution training that aims to promote the concept of tolerance as a tool to minimise hatred and to put an end to the abuse of religion to justify violence. The project encourages participants to generate new insights into Abrahamic religions and become key voices for peace and reconciliation at the local level. The spiritual element of the training encourages participants to look beyond their personal interests towards greater cooperation and understanding.