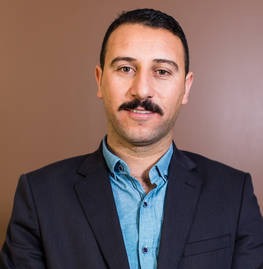 Saydo Khairi Ahmed was born in Sinjar, Nineveh province, Iraq. He hase been working as a high-school teacher for the past 8 years. In addition, he works for the organization Yazda as a deputy manager for the Iraq programme and coordinator in the educational and religious programmes.

Saydo is an active participant in civil society, and works as a coordinator among the youth and the Yazidis Spiritual Council, focusing on capacity building among youth and community leaders to strengthen the relations between communities. In his work, he promotes and advocates tolerance, justice and respecting individual rights.

Since the occupation by the so-called ISIS of some areas of Iraq, he has been actively involved in volunteering for many NGOs, including but not limited to, “Our Voice”, and “Adyan”, which deals with peaceful coexistence. Moreover, he is the author of many articles in Iraqi media on peace, dialogue, national unity and recently published a documentary promoting Iraq’s unity and advocating a return to the co-existence that existed in Iraq.