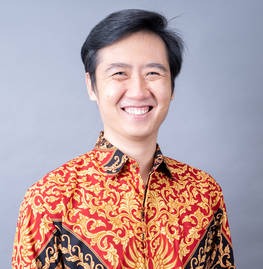 Samanta Surya is a young professional in communications, and earned his bachelor’s degree in communication science at the University of Indonesia in 2008. His expertise covers public and government relations in bilateral cooperation and publications. For nearly two decades, he has been a member of Parisadha Buddha Dharma Niciren Syosyu Indonesia (NSI), an inclusive Buddhist organization with that cooperates with faith-based organizations, governments, and NGOs in Indonesia to promote harmonious life. Surya is a youth coordinator and regular speaker at NSI’s youth division meetings and is also the editor of NSI magazine and cooperated with the Ministry of Environment and Forestry of the Republic of Indonesia in 2014 to publish the book Buddhism and Environment.

Surya has been engaged with various interreligious forums in local, national, and global levels since 2008 co-organized by governments of Indonesia, the Asia-Europe Foundation, Christian Solidarity Worldwide, and the United Nations. In 2014 he made a short film about interreligious life in Indonesia which was presented in Myanmar by the government of Indonesia with the goal of reducing tension on the issue of Rohingyas in Myanmar. Surya loves to travel, experiencing new insights, walking and photography. His motto is “sincerity, propriety, and equity”.