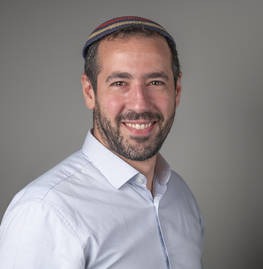 Rabbi Ioni Shalom is married with Natalia Arazi, the first Jewish liturgy cantor woman of Latin America and is the proud father of twins. Rabbi Ioni leads the Bet Hilel community, a central Jewish community in the heart of Palermo, Buenos Aires. This community has been renewed both outside and inside with a brand new and fashioned building and a new project of institutional design and strategic planning. Bet Hilel is recognised for its great youth movement and its own leaders school.

Rabbi Ioni has served in several communities and schools since 2002 and he also has been teaching Torah, Liturgy, Exegesis and Jewish Law at the Latin American Rabbinical Seminar, Marshall T. Meyer in Argentina.

Rabbi Ioni has studied at the Marshall T. Meyer Latin American Rabbinical Seminary in Argentina and at the Schechter Institute of Jewish Studies in Jerusalem. He also holds a BA in NGOs management from the Universidad Nacional de General San Martín of Buenos Aires.