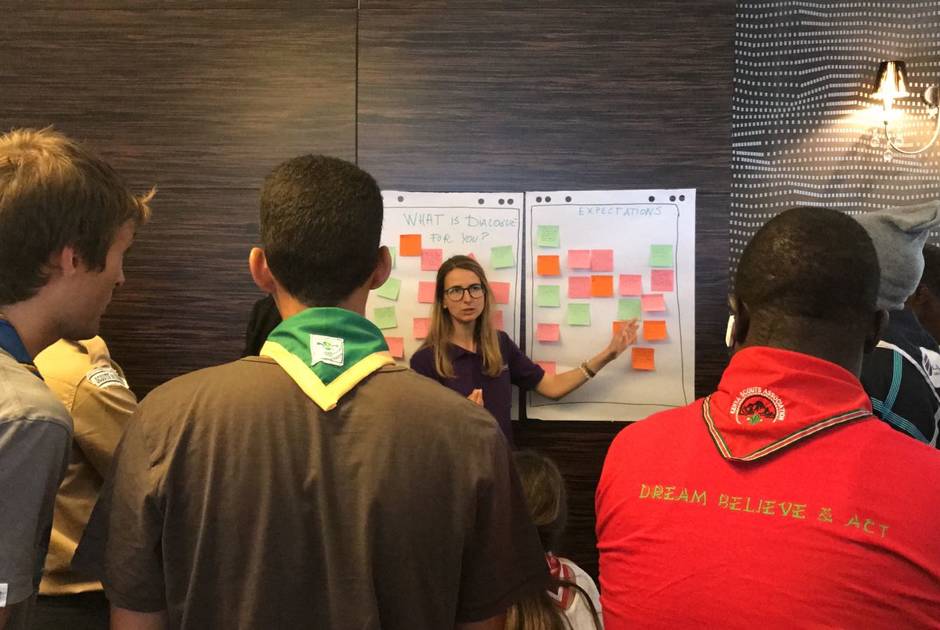 The World Organization of the Scout Movement (WOSM) and the International Dialogue Centre (KAICIID) trained 60 Scouts from all over the world in dialogue facilitation from 4 to 5 August in Gabala, Azerbaijan. The training is intended to prepare participants to take part in the upcoming World Scout Youth Forum, the largest global gathering of Scouts, to be held in Baku Azerbaijan from 7 to 10 August.

The training was conducted by Scouts who have been trained by KAICIID and WOSM experts through the Dialogue for Peace Programme (DfP) to promote the use of dialogue as a tool for learning and promoting peace and understanding within the Scout Movement.

“As Scouts it is important for us to be key drivers for positive change,” one participant reflected. “Learning about dialogue we acquire a tool to create a positive change at all levels of society.”

The participants will take these skills to the upcoming 13th World Scout Youth Forum and 41st World Scout Conference – which are among the largest international Scouting events – and eventually back to their own communities.

“Bringing these values of dialogue back to our communities is one more step towards a more just and peaceful world” one participant from the Interamerica Scout Region said.

Participants will also discuss the work of WOSM and KAICIID at the forum, including the recently published Spiritual Development Survey, and the Dialogue For Peace Badge, a new Scouting badge awarded to some participants for the Gabala training who have been trained in the foundations of theory and practice of dialogue.

KAICIID and WOSM have been training Scouts in dialogue in all Scout regions as part of the DfP Programme. This coming October, further trainings will be held in for the Eurasia region in Georgia and Kazakhstan.

The Dialogue for Peace Programme is a result of a two-year collaboration developed by WOSM and KAICIID that provides dialogue training to leaders within the Scout Movement who will then bring this knowledge back to their communities to spread dialogue practices on a wider scale.

The first regional trainings were held in Korea and Uganda in 2015, in the Interamerican region in 2016, and in the European region in 2017. There will be two more trainings in October in the Eurasia region. With the current training at the world level before the World Scout Youth Forum, all Scout regions would be  enabled with the basic knowledge of dialogue and peacebuilding by the end of 2017.  Other formats of dialogue training and awareness are planned, to be a part of larger Scouting events and will be conducted by the Dialogue for Peace Programme team within the Scout Movement in the coming years.