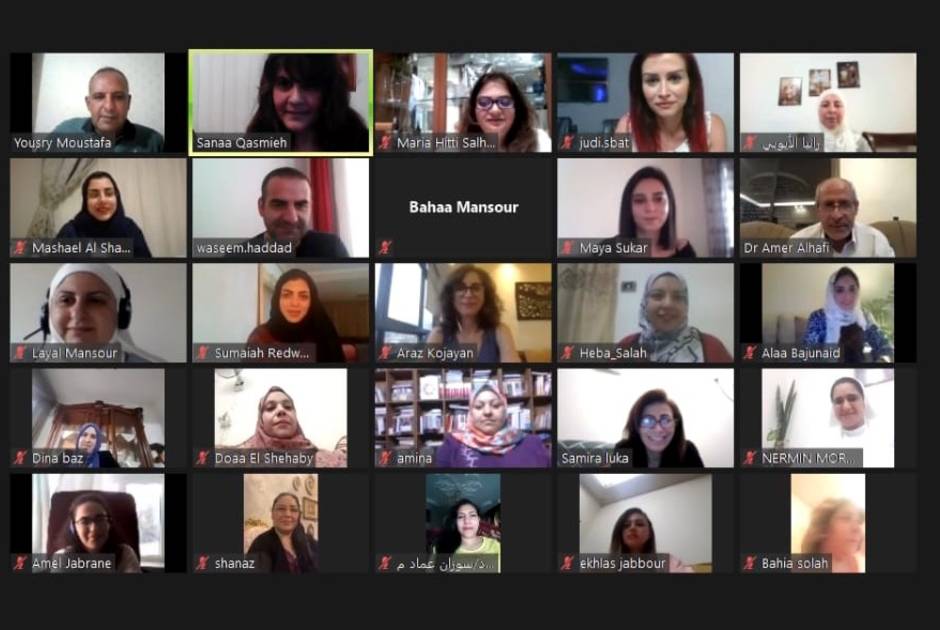 Women from Saudi Arabia, Syria, Iraq, Lebanon and Egypt are engaged in a training project to help them promote social cohesion, counter hate speech and respond to the challenges of COVID-19 in their respective communities.

Launched by KAICIID in collaboration with the Interreligious Platform for Dialogue and Cooperation in the Arab World, the She for Dialogue initiative is a pilot project initially limited to a select group of countries but intended, depending on outcomes, to encompass the entire Arab region as well as other regions across the globe.

“At KAICIID we strongly believe in the role of women in peacebuilding and dialogue,” says KAICIID Secretary General Faisal Bin Muaammar. “Because we view women as equal partners, we have developed a special project that highlights their natural role as peacebuilders.”

He added: “Empowering women is our goal and we believe that the only way to truly achieve this is through an inclusive, multilateral approach. If we do not work hand-in-hand, it will be very difficult to reach shared solutions for our shared challenges.”

She for Dialogue project participants receive training aimed at preparing them to implement tailored peacebuilding initiatives in their respective local communities. Their training ends with presentation of a manual to help them implement subsequent training for community members in their localities.

“Many studies have shown that peace processes are sustainable when women take active roles within them, so we designed this project in order to empower women and enhance their knowledge and skills in the thematic areas of interfaith dialogue, social cohesion, peacebuilding and pluralism,” says Sanaa Qasmieh, in charge of KAICIID Partnerships and Networking in the Arab Region.

“This way they can become local ambassadors within their communities by promoting peaceful coexistence and social cohesion,” she adds.

The first training workshop took place during the last week of May. The four sessions were conducted online due to COVID-19 restrictions on physical engagement.

On the first day the 25 participants learned the definition and the principles of impactful dialogue.

They then moved on to discuss concepts such as diversity, pluralism and the dynamics of identity and culture.

The training went to on encompass gender mainstreaming in dialogue and peacebuilding as well as the barriers preventing the meaningful participation of women in dialogue.

During the final session, participants were addressed by Dr.Amer Al-Hafi, a Jordanian expert in interreligious and intercultural dialogue and an academic advisor at the Royal Institute for Interfaith Studies in Jordan.

“Our work on identity and multiculturalism was really important,” says Amina Al-Thahabi, a participant from Iraq who is a member of the Iraqi Council for Interfaith Dialogue as well of the non-profit organisation Masarat for Cultural and Media Development.

“The main skills I improved during the workshops are related to dialogue, especially while addressing challenging and controversial issues,” she adds. “I learnt how to ask sensitive questions and how to create a safe space for dialogue.”

Judi Sabat, a communications associate with the United Nations Development Programme in her home country, Syria, says that interacting and sharing views with women from different national and religious backgrounds was a crucial part of her training experience.

“I applied to the project because I am a feminist and I was interested in dialogue between women. Due to COVID-19, we had to meet on Zoom and I was afraid it wouldn’t be easy to break the ice and overcome barriers online, but the facilitators managed to support us through this process.”
Sabat, a lawyer who had also taken part in the 2019 KAICIID Arab Youth Forum, thinks that empowering women is particularly important in countries ravaged by or recovering from conflict.

In Syria, she explains, the toll taken by war on men in particular means that the larger part of the adult population is female: “In a very conservative environment, where women were always told to stay at home, they are now in charge of rebuilding the society. They are leading and raising the new generations alone, so they need to be empowered.”

Acknowledging their own rights

While waiting to participate in the second and third training workshops in September and December, participants of the She for Dialogue project are brainstorming on how to design and implement community-based empowerment initiatives back in their home countries.

Involving women in disadvantaged or more conservative environments, who usually don’t have access to such opportunities, is crucial according to Sabat:

“If we always speak to those who already have access to a proper education and chances for training and improvement, other women will remain isolated. We need to involve them and maybe, at a later stage, even talk to their husbands and families, so that we can see how religion and traditions impact their lives. We can do it without breaking the social balance they are part of.”

Sister Emily Tannous, Director of the Middle Eastern Council of Churches Theological and Ecumenical Department, as well as a member of the She for Dialogue steering committee, believes that for centuries conservative religious interpretations were an obstacle to women’s emancipation across the Arab world. Access to education for young women and girls was crucial for women to be able to claim active and leading roles within the society, she says.

Despite recent progress however, experts say women are still largely perceived as of secondary importance in some Arab countries.
Initiatives aiming at empowering women, such as She for Dialogue are still needed, says Tannous, who belongs to the Sisters of the Sacred Heart congregation in Lebanon.