Together for Diversity: Buddhist and Muslim Leaders Unite Against Violence and Hate Speech 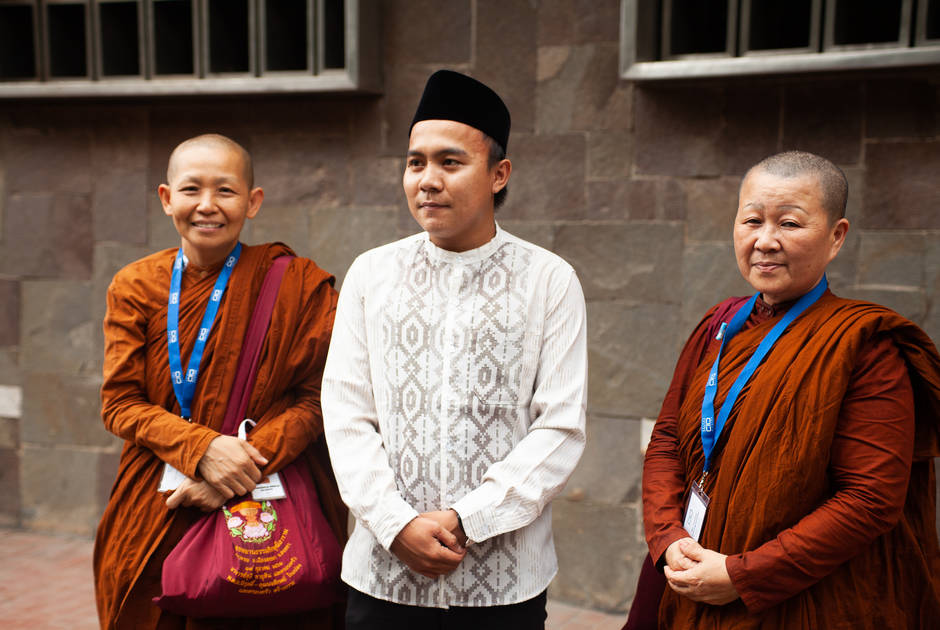 Over 65 Buddhist and Muslim religious leaders from five South/South-East Asian countries, gathered in Jakarta this week for a workshop addressing hate speech, protection of holy sites, and inclusive education.

Hosted by The International Dialogue Centre (KAICIID) and the Organization for Islamic Cooperation (OIC) on Dec 18-19, the two-day event titled “Together for Diversity” welcomed participants from Indonesia, Malaysia, Myanmar, Sri Lanka and Thailand.

Kicking off the first day with panel discussions, attendees spoke openly about the need to facilitate better collaboration between religious leaders from different faith backgrounds and to foster relations with policymakers in order to address current pressing issues such as radicalism and incitement to violence.

“If we want to fight the effects of radical ideology, which has become a worrying trend not just here in South and South-East Asia, but all over the world, we must focus on the need to integrate different ideologies, different ways of life, and different religious traditions” KAICIID’s Secretary General Faisal bin Muaammar said.

“We can only do so by emphasising the common principles shared by all believers: peace, integrity and social justice”.

The worrying rise in hate speech, which is one of the Centre’s key priorities for 2020, as well as best practices for prevention were particularly highlighted during the subsequent panel sessions.

Sheikh Arkam Nooramith, Director of the Nooraniyyah College in Sri Lanka, pointed to a lack of regulations regarding hate speech on social media channels, encouraging platform owners to find ways to stop misinformation and rumour-mongering.

“These companies focus on profit, so what kind of messages generate more impact? The ones that get them the most advertising, which are often negative messages”, he said.

However, Jessyln Metta, the Coordinator for “Outstanding Youth for the World” in Indonesia, argued that in addition to social media companies, religious leaders and communities also have a great duty of care to use platforms to spread peace.

“Extremist preachers use YouTube to upload recorded speeches. But this doesn’t happen with religious leaders who spread positive messages. Why? If we shared content the way extremist preachers do, we would see good results”, she said.

Metta also says that in order to address hate speech among youth, religious communities must start reaching out through social media.

“Statistically, young people are really engaged through visually appealing messages, so video content, for example, is the best way to deliver a message. I am thinking about starting my own YouTube Channel to produce content that produces positive values. This is how we should reach out to the youngest generation.”

Sheikh Nooramith agrees. “I am very amazed to see how Buddhist Monks, especially those from Thailand, engage with youth and the media; how proactive they are as religious leaders and in their religious teaching. Nowadays, religious leaders have to be very smart and well-trained in PR and Marketing if they want to spread their message of harmony and peace on social media”.

On the second day of the workshop, participants identified a set of national and regional recommendations for religious leaders and policymakers, which was compiled into a joint declaration.

Participants then took an interreligious excursion to two of Jakarta’s most prominent houses of worship – the Istiqlal Mosque, which is the largest mosque in South-East Asia and Jakarta’s main cathedral.

Metta believes the outcomes of the conference indicate a collective agreement to strengthen diversity and interreligious dialogue throughout the region, despite religious and cultural differences.

“Everyone has their own opinion, but mostly we all have common understanding, the same mindset and the same goals”, Metta said. “We know what is right and wrong. We, as a diverse community, can achieve the same goals for all of us”.