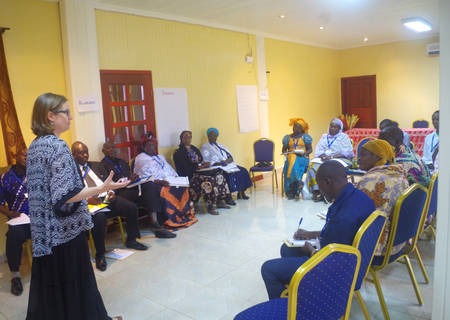 The International Dialogue Centre (KAICIID) hosted a two-week training of trainers session from 15 to 23 May 2017 in Bangui, the Central African Republic, to build dialogue capacity among women and young people from the Muslim community in CAR. This training empowered a skilled group of trainers representing groups that suffer social exclusion. These women and young people are essential partners in building lasting peace in the country.

The participants, who represented diverse groups within the CAR Muslim community, acquired techniques to conduct and promote dialogue that explores conflict dynamics and creates a safe space for dialogue. They also had the opportunity to take part in intra-religious dialogue with other members of the Muslim community. Based on this training, a CAR-specific dialogue training manual will be drafted for further application throughout the country.

“Women and youth leaders are often excluded from the decision-making process, despite their key contribution to social cohesion,” said Abderrahman El Yessa, KAICIID’s Chief of Interreligious Dialogue in Conflict Situations who oversaw the training. “Women and youth, as well as religious leaders, have the potential, thanks to their proximity with people on the ground, to mobilise the society at large towards a sustainable peace in the country.”

This intensive training on intercommunity dialogue facilitation was a priority that was raised by representatives of the Muslim community in the Action Plan that was adopted in Vienna in February 2016. The Action Plan contributes to the efforts to consolidate peace in the Central African Republic. KAICIID supports the process in the Central African Republic that aims to help put the country on the road toward peaceful development.

The International Dialogue Centre in the Central African Republic

KAICIID is an intergovernmental organization based in Vienna, Austria, which uses dialogue to solidify peace and build social cohesion in conflict areas and to promote understanding and respect between people of different cultures and religious traditions. Since 2014, KAICIID supports religious communities in CAR to help foster conditions for lasting peace and the reduction of violent conflict and instability in the country. KAICIID is committed to collaboration with authorities and will continue to support the process of dialogue for lasting peace in the country.