Summary of Outcomes: High-Level Meeting on Intercultural and Interreligious Dialogue 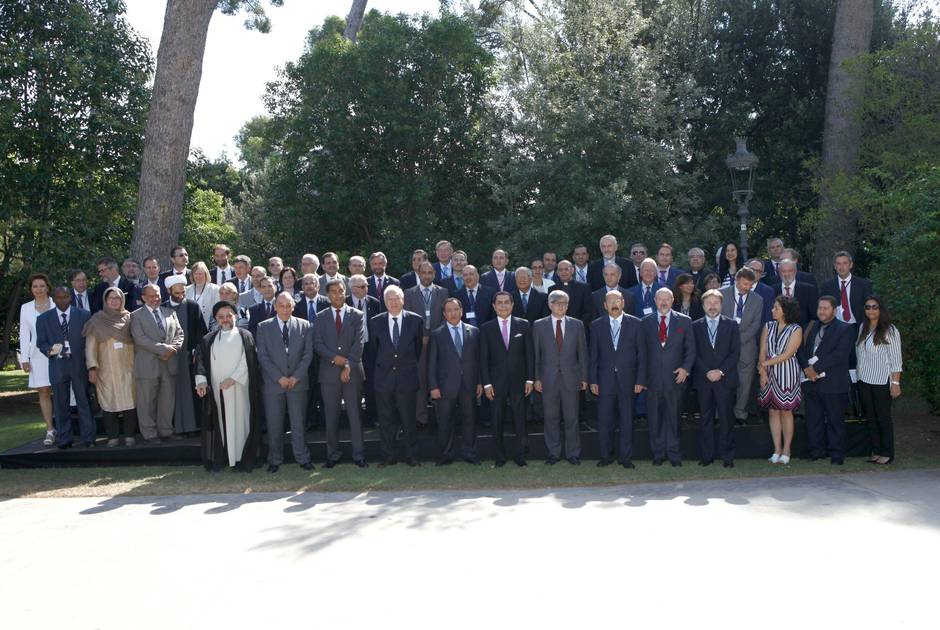 Representatives from the central international institutions mandated for intercultural and inter-religious dialogue and prominent personalities, including religious leaders, and leading regional works/programmes involved in interfaith action and cultural diplomacy met on 22/23 July at the Union for the Mediterranean headquarters, in Barcelona.

They met in the framework of the High-level meeting on intercultural and interreligious dialogue, held at the initiative of the Spanish Minister for Foreign Affairs and Cooperation, Mr. José Manuel García-Margallo, and in partnership with the Union for the Mediterranean (UfM), the King Abdullah Bin Abdulaziz International Centre for Interreligious and Intercultural Dialogue (KAICIID), the UN Alliance of Civilizations (UNAoC), the Anna Lindh Foundation (ALF), and the European Union (EU).

Participants engaged in general discussions on the main challenges of interreligious and intercultural dialogue in the Euro-Mediterranean region and made substantive comments at the different plenary sessions held during this two-day meeting.

There was a broad consensus on the growing importance of inter-cultural and inter-religious dialogue as powerful tools for achieving stability and peace, fighting intolerance and extremism while upholding values of peaceful coexistence and mutual understanding.   At the 20th anniversary of the Barcelona Process, which is based on the principles of joint ownership, dialogue and co-operation, and in view of the ongoing consultation regarding the European Neighborhood Policy (ENP) review, participants acknowledged the need to position inter-religious and intercultural dialogue as a central goal within a renewed multilateral policy approach to the Mediterranean.

In this context, and in view of the existing challenges, participants welcomed this meeting as an important opportunity to raise awareness of the significant contribution that interreligious and intercultural dialogue can make to peace and security in the region.

Following discussions held during the meeting, as well as written contributions submitted by the main institutions participating in the meeting, the six partner institutions have drawn the following conclusions:

1. There is a need to map existing successful stories on intercultural and interreligious dialogue.

An initial mapping exercise was conducted during the meeting and information was shared among participants in the discussions.

Participants identified intercultural and interreligious actions being implemented in the fields of,: education, youth, media, social media, migration, women, peacebuilding, mediation, peace mapping, conflict resolution, common citizenship, image of the other, etc..  The programmes in these areas included training, capacity building, and implementation of shared projects by stakeholders, such action are being implemented with leaders and grass roots and at international, regional and local levels. The discussions also focused on how to enhance the results and sustainability of such programs.

Participants pointed out to the need to enhance inter-institutional cooperation and address the  challenges of identifying the best practices that work in the promotion of intercultural and interreligious understanding in order to implement strategies that are the most efficient.

Each institution has a different added value in the field of intercultural and interreligious dialogue and several have a specific approach or focus. All the approaches are necessary and all of them complement each other, in enhancing the global action undertaken.

They identified the most important factors for the success of their initiatives. They assessed the shortcomings that need to be overcome and the most notable lessons. They pointed out the need to engage in a benchmarking analysis before embarking in new initiatives.

Based on this exercise and discussions during the meeting, partner institutions committed to finalizing the mapping exercise with a view to gain an overview of actions being implemented. In addition, based on this mapping exercise, a set of best practices on interreligious and intercultural dialogue in the region will be put forward.

2. There is a need for enhanced coordination mechanisms for institutions active in the field of intercultural and interreligious initiatives in the Euro-Mediterranean region.

The discussions showed that there is room for greater coordination among institutions and organizations. Some projects could be scaled-up to leverage their impact. Scaling up the impact of existing initiatives was identified as the main challenge. They agreed that mutual collaboration would increase not only the efficiency but also the visibility of the action underway.

In this regard, partner institutions decided to present by the end of September a document taking stock of the actions implemented and identifying areas for common collaboration and for joining the added value of each institution. These coordination mechanisms will lay out the methods and structure to enhance the collaborative efforts of these organizations in contributing to peace and stability. They have also agreed on the need of coordination between different networks to divise and implement a multisectorial approach.

There is a need to establish a network of institutions in order to develop the coordination mechanisms. In this regard, partner institutions agreed to create a Network of Focal Points from Institutions and Organizations involved in intercultural and interreligious dialogue, in order to emphasize the need of positive and collaborative approaches to promote mutual understanding.

Spain, offered to host in Casa Arabe, together with the partner institutions, a meeting of the network of Focal Points from institutions, as a follow-up to the discussions held in this High level Meeting.

One field of coordination for the network of Focal Points will be the establishment of Indicators of Performance. It will allow the appropriate evaluation necessary for the enhancement of future projects.

Intercultural and interreligious dialogue will also be a central pillar in the forthcoming event organized at the Union for the Mediterranean, in collaboration with partner institutions, on the occasion of the 20th Anniversary of the Barcelona Process.

3. There is a need to identify potential donors who can partner with the core institutions in the scaling-up.

Discussions showed that in order to scale-up the actions undertaken by core institutions, they need to partner with civil society donors, such as foundations, universities, associations and the private sector.

4. There is a need to launch a long-lasting action-oriented Process aimed at strengthening the capacity of organizations and fostering their cooperation in order to significantly contribute to countering discrimination and intolerance.

In this regard, partner institutions agreed to set out a Roadmap for future activities of the network, based on a common agenda and calendar of activities framed around the major initiatives planned over the coming years. The Roadmap will include an Action Plan of activities by institutions, sharing their experiences and establishing new common projects or extending current projects to the participation of other institutions.  Some common future activities were identified: the Anna Lindh Foundation will expand its programme “Young Arab Voives” focusing on youth debate skills and spaces for tolerance; KAICIID will partner with Al Azhar University, the Royal Institute for Interfaith Studies of Jordan and the Middle East Council of Churches in a programme on training of religious leaders and young people in utilizing social media for interreligious pluralism; the United Nations Alliance of Civilizations will partner with the International Migration Organization in “Global Migration Reporting” focusing on media coverage of migration for inclusive and tolerant societies; and the Union for the Mediterranean secretariat will develop its interaction and partnership with the other institutions within the framework of its flagship programmes on Youth employment (Med 4 Jobs), women empowerment and education (University of Fez).

The Anna Lindh Foundation and KAICIID have offered to host activities for the follow-up of this High Level Meeting.

During the discussions, some areas for common action were identified:

- Youth initiatives at local level. Youth programmes in intercultural and interreligious institutions focusing on concrete local initiatives that youth can initiate in order to disseminate the message of pluralism and diversity. Programmes supporting the interaction of young people from different cultures in extra-curricular activities, such as culture and sports summer camps.
- Youth and social media. An initiative to enhance the capacity of young leaders to use social media for intercultural and interreligious pluralism in their own society.
- Visibility of youth voices for peace. An initiative partnering for communication campaigns and media capacity-building to give visibility to the voices of the region’s youth leaders in building their own narrative in face of extremism and investment in youth training youth leaders from across the region with the skills to engage in mainstream media debates and programming.
- Women’s participation. Programmes to enhance the role of women in preventing conflict and in conflict resolution.
- Religious leaders for peacebuilding. Promotion of a network of religious peacemakers that act at local and national levels.
Interreligious education and diversity. An initiative to support the educators who work in religious schools or education systems to focus on interreligious dialogue and values of peace, pluralism, and civic engagement.
Religious leaders and policymakers. Programmes to increase continuous engagement between policymakers and religious leaders in addressing a wide range of issues.
- Observatory for cultural diversity in the media. Initiative for the creation of an observatory mechanism, together with leading media institutions, to monitor more effectively the role of media when reporting on issues of cultural diversity.
- Migration and media. Programmes to promote global migration reporting to improve media coverage of migration and migrants-relevant issues.
- Hate speech. Creation of a platform for constructive dialogue and sharing best practices for journalists.