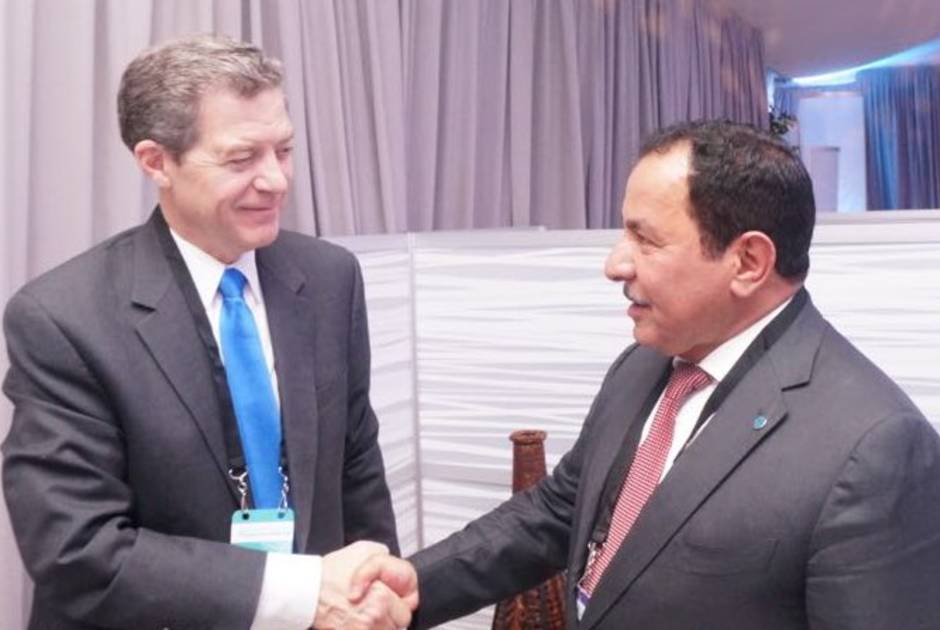 At the first-ever Ministerial meeting to advance religious freedom around the world, hosted by US Secretary of State Mike Pompeo, diverse stakeholders met to discuss international efforts to strengthen religious freedom. KAICIID Secretary General Bin Muaammar participated in the Ministerial and held a series of bilateral discussions, including with the US Ambassador-at-Large for Religious Freedom Sam Brownback. At their meeting, the Secretary General provided Ambassador Brownback a detailed overview of KAICIID’s work to strengthen religious freedoms around the globe through the Centre’s dialogue promotion programmes.

Secretary General Bin Muaammar stated in his meeting with Ambassador Brownback that “we can promote religious freedom in diverse societies where people fear the other by building the dialogue infrastructure to improve understanding between people. The solution is creating opportunities for dialogue between different people to learn that all people have equal rights and share common citizenship”.

In their discussion of future opportunities for cooperation, the Secretary General detailed for Ambassador Brownback a key challenge to overcome, namely that “the religious and secular worlds are separated by a huge gap in knowledge and trust.  KAICIID was created to build bridges between secular policy makers and religious community leaders. We work in countries like Nigeria and Myanmar where conflict has risen after religion has been manipulated to justify violence. As conveners, we bring together dialogue experts, policy makers and religious leaders to work together for sustained peace”.

In his discussion with Ambassador Brownback, other State Department officials and participants at the Ministerial, Secretary General Bin Muaammar stressed that “religious freedom means people of any religious identity enjoy the same rights under the umbrella of shared and equal citizenship, fulfilling the same obligations in their communities.  We need a new mindset to see global citizens first and to understand others’ religious identities.  Our ignorance makes us vulnerable to manipulation. We can end that threat in this generation. Around the world, ignorance about religion is exploited to recruit extremists, build hate and divide communities. Religious leaders play an essential role in standing up to hate. They need policy makers’ collaboration to make lasting progress against prejudice and hate. If we want lasting change we need to make religion part of the solution. Religion can only contribute if the religious leaders are at the policy table”.

KAICIID builds the capacity of religious leaders to prevent hate speech and genocide. We have been in the training business since 2015. We have trained over 4000 people, including young community leaders, women and religious leaders.

In Nigeria, in the Central African Republic, in Myanmar, and most recently, through the launch of the Interreligious Platform for Dialogue and Cooperation in the Arab Region, KAICIID strengthens new and existing interreligious platforms.

In Nigeria, the interreligious platform we set up drafted legislation to forbid “hate preaching” by any preacher of any religion.  In the Central African Republic we support interreligious initiatives to resettle refugees who fled violence. In Myanmar we helped launch the country’s first interreligious dialogue training center to address the polarization of Buddhist and Muslim communities. These platforms help protect the rights of all religious communities, large and small.

In 2015, we launched our Arab region social media training that has reached 400 practitioners from six religions from Iraq to Tunis. We also issued an Arabic social media training manual. We hope to translate it to other languages to use it in training in Europe, for instance. Pushing back against hate speech directed to people of different religions will also increase religious freedom in the Arab world.

In spring 2017, we established the first network for religious Muslim and Christian faculties and institutes in the Arab region. This network will foster understanding between the institutions that educate tomorrow’s religious leaders. The religious leaders in that region tell us that the current conflict would not have been possible if interreligious dialogue had been practiced by religious leaders to support inter-community understanding. If we start now, the new generation of religious leaders will have these skills to work with their counterparts in other religious communities to prevent further extremist outbreaks.

We also offer intensive year-long Fellowship programs for professionals training future religious leaders. The graduate Fellows are multipliers of interreligious dialogue in their communities.  They set up projects in their communities that will have a lasting impact. They each are launching interreligious dialogue projects in their home countries which are often located in conflict zones. Over time we will have a vast network of trained professionals who all seek to uphold religious freedom.