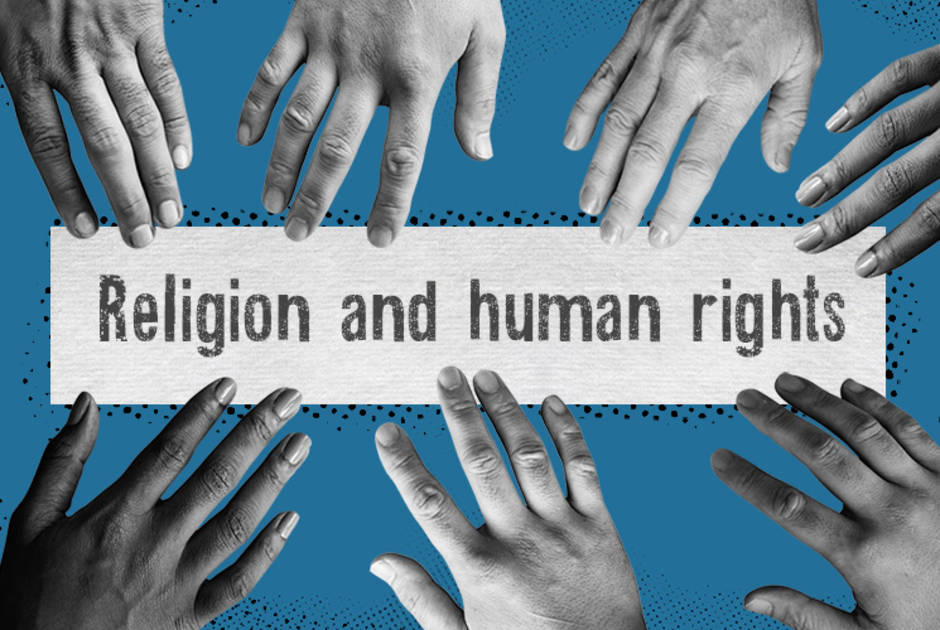 When it comes to the rights of people seeking refuge for social, economic or health reasons, to serving and protecting the vulnerable, and numerous other issues related to global justice, human rights organisations and religious actors often share a common cause. However, there are issues of personal moral conviction, public health, and other matters that can become points of divergence.

Recognising the connections and tensions that exist between religious communities and human rights actors, the International Dialogue Centre (KAICIID) put together this primer on how careful coordination and multistakeholder partnerships can contribute to productive dialogue and the promotion of human rights. The below is based on the event “Seeking Connections, Exploring Tensions: Human Rights and Religious Values,” a KAICIID Fellows Alumni Session which took place on May 27, 2021.

Religious leaders not only have a proactive role to play, but can lead the way in upholding, defending, and strengthening human rights across the globe.

For many religious actors, human rights begin with the protection of religious freedom. As some of the oldest and most highly-valued rights, freedoms of religion and belief are addressed in Article 18 of the Universal Declaration of Human Rights:

Everyone has the right to freedom of thought, conscience and religion; this right includes freedom to change his religion or belief, and freedom, either alone or in community with others and in public or private, to manifest his religion or belief in teaching, practice, worship and observance.

This also includes the freedom from being coerced "to adopt a religion or belief," rights to assemble, and the freedom "to ensure the religious and moral education of their children in conformity with their own convictions."

And yet, even religious freedom laws — widely recognised as a pre-eminent dimension of international human rights, according to the Organization for Security and Co-operation in Europe (OSCE) — are aimed to protect human beings and not “religions” per se, said Susan Kerr, Senior Advisor on Freedom of Religion or Belief at the OSCE Office for Democratic Institutions and Human Rights (ODIHR). Moreover, these laws protect both internal and external aspects of religious belief and behaviour, she said, but it is only internal aspects of religion — thoughts, beliefs, etc. — that are unconditionally protected. There are limits and conditions placed on external practices.

For example, while the OSCE underscores that everyone is guaranteed the right to adopt a religion or belief of their choice, either individually or in community with others, in public or private, and to manifest that religion in worship, observance, practice, and teaching, there have been robust discussions about the limits afforded to religious actors and institutions when those practices are deemed to be at variance with other fundamental human rights, contravene public health and safety, or do not constitute a core religious belief. According to legal scholar Farrah Raza of Oxford University, the debate continues around the “normative clarity” around the conditions placed on religious freedom.

Ioannis Dimitrakopoulos, Senior Scientific Advisor at the European Union Agency for Fundamental Rights (FRA) emphasised how religious freedom, and the beliefs and practices defended therein, should be viewed as one part of a wider suite of rights that must be held in balance with each other.

Even so, Kerr believes religious freedom laws can be a good place for religious actors to begin to think about how they can contribute to the realisation of human rights more broadly.

“When a member of one religion speaks out on behalf of the religious rights of others, that’s particularly powerful,” she said.

How can we address issues that are sources of tension between religious freedom and human rights?

The public recognition of diverse family forms and sexual orientations, questions of conversion, and backlash against certain religious practices have triggered negative responses from some religious communities and created tension between them and human rights advocates. Other times, religious actors can feel singled out for human rights violations when there are other factors at play or when they feel a violent, vocal, or fanatical minority within their community is confused with the majority.

Dimitrakopoulos said that the potential tensions between human rights and religious values is not between “religion” and “human rights” per se, but about  how both are interpreted and applied. There is no basis to frame these tensions as an unassailable antagonism between the two.

Skepticism around human rights by some religious leaders and suspicion of religious actors by human rights advocates comes down to a lack of awareness, education, and interaction, said Kerr.

Dimitrakopoulos and Kerr agreed that the best way to seek this balance — and avoid strained relations — should be to regularly, substantively, and actively include religious actors in discussions around human rights. For example, when the European Union was considering its constitution, religious actors were involved in the dialogue, said Dimitrakopoulos. From the very beginning, partners on both sides recognised that “social law and divine law had to be in dialogue” to make the process successful and sustainable.

“Because religious leaders shape public opinion around laws governing society,” said Dimitrakopoulos, “it is important to engage with them to find some sort of shared space with human rights actors — to build up trust to support and empower the vulnerable in our societies.”

How can religious actors contribute to the realisation of human rights in the public sphere?

“Religious actors can, and do, contribute to the promotion of human rights in many and various ways,” said Kerr.

However, when it comes to how “religion” contributes to the realisation of human rights in the public sphere, things get a little more complex. Although it may appear as if “religions” enable or stand in the way of human rights, religions, as such, cannot obstruct or contribute to the defence of human rights, she said. “Religions do not have agency in and of themselves,” said Kerr, “it is religious actors who have agency — the power to make a change.”

One way to do this is to intentionally identify issues of common concern: the situation of migrants' and refugees' integration, climate change, marginalised minorities’ living conditions, racism, equity for persons with disabilities, and religious freedom, said Kerr. “By identifying shared challenges and priorities, actors on all sides can find safe spaces to come together,” she said.

Starting with dialogue, Dimitrakopoulos said, religious and secular institutions, organizations, and actors can find ways to work together to achieve change. “It’s the outcome that will bring us together,” said Dimitrakopoulos.In this regard, KAICIID has a wealth of experience, he added.

Their work on issues as diverse as hate speech, integration, environmental justice, and public health has shown not only how religious actors can be a part of upholding and advancing human rights, but often take a leading role, he said. “Organizations such as KAICIID show us how the work can be done — both in theory and in practice on the ground”.

9 June 2021
Health Concerns in Religious Communities: Challenges and Approaches
10 December 2018
On the 70th Anniversary of the Universal Declaration of Human Rights
END_OF_DOCUMENT_TOKEN_TO_BE_REPLACED