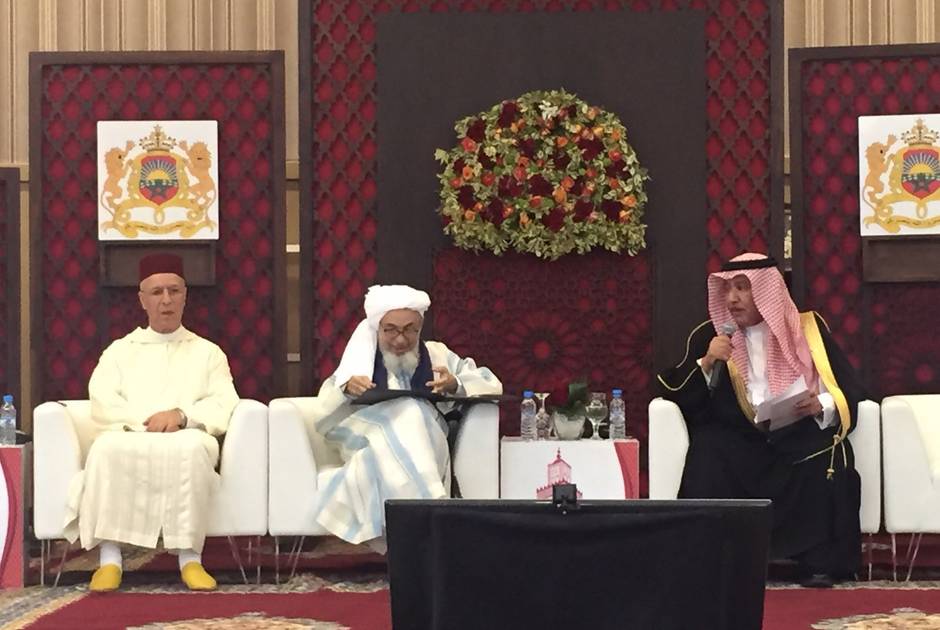 The Secretary General of KAICIID, Faisal Bin Muaammar urged leaders in the Arab world to pursue action on the day-to-day, on-the-ground problems that are faced by Christian and Muslim communities who are enduring the atrocities committed by the so-called ISIS and other similar groups.

The Secretary General was speaking during a panel at the conference on the “Rights of Religious Minorities in Predominantly Muslim Majority Communities”, organized from January 25-27 in Marrakesh, Morocco by the Ministry for Endowments and Islamic Affairs of the Kingdom of Morocco and the Forum for Promoting Peace in Muslim Societies, under the auspices of Sheikh Abdallah bin Bayyah.

The KAICIID Secretary General expressed his gratitude to the Kingdom of Morocco and to Sheikh Bin Bayyah, for their initiative and vision in organizing the conference.

Bin Muaammar said: “Theological studies and revisions of Islamic historic and religious writings are very important in this discussion. But what is perhaps even more important is the action that follows. KAICIID’s experience with these issues shows that there is an urgent need for Christian and Muslim religious leaders to pursue joint action: to publicly work on issues of shared concern to both groups. Action is needed on the day-to-day, on-the-ground problems that are faced by Christian and Muslim communities who are enduring the atrocities committed by so-called ISIS and other similar groups.”

The participants at the meeting unanimously agreed that no violent act can be justified in the name of any religion.

The Secretary General outlined KAICIID’s work on the United Against Violence in the Name of Religion Initiative, which seeks to promote common citizenship and social cohesion in the Arab region and elsewhere by bringing together religious leaders and policy makers to work on joint projects.

The KAICIID meeting in November 2014 in Vienna, Austria resulted in a public declaration of solidarity and inclusion from the highest representatives of religious communities from across the Middle East which asserted “that every religious, ethnic, cultural or linguistic heritage is an irreplaceable and an inherent part of the Arab culture, rooted in its history, and contributes to the vibrancy and diversity of the fabric of those communities. We also affirm that each person is vital to the future of these countries as they coexist equally with the same rights and duties to create solidarity between the Muslims and the Christians in the Middle East.”

As a recommendation from this initial meeting, KAICIID is developing a network of Arab theological faculties (first meeting held in November 2015), which is aimed at helping to develop education that fosters religious and cultural diversity, a culture of dialogue, and respect for others.

Also as a recommendation from this meeting, KAICIID is working to create positive campaigns to counter extremist campaigns, and training religious leaders and advocates for common citizenship to use social media to spread their messages. The first training was in Amman, Jordan last year, and four more regional trainings are planned.

In Athens, September 2015, KAICIID, together with the Ecumenical Patriarchate and the Hellenic Ministry of Foreign Affairs, facilitated a discussion on the relationship between Christian and Muslim communities in the Middle East, with specific reference to the preservation and protection of the Christian communities.

United Nations Special Adviser on the Prevention of Genocide, Adama Dieng also called in his speech, on the participants at the conference to join in the implementation of the Fez Action Plan, a KAICIID-supported initiative which upholds citizenship rights for religious minorities.

The conference in Marrakesh brings together muftis, ministers, scholars and researchers of different religions. The conference was opened by His Majesty King Mohammed VI or Morocco.

The Marrakesh conference aspires to revive the historic “Constitution of Medina”, the first written constitution in the world.

The conference also aspires to develop the religious framework for contractual citizenship and the minority protection to mobilize the activities of Muslim communities and to urge them toward constructing a large movement to protect religious minorities in Islamic countries.