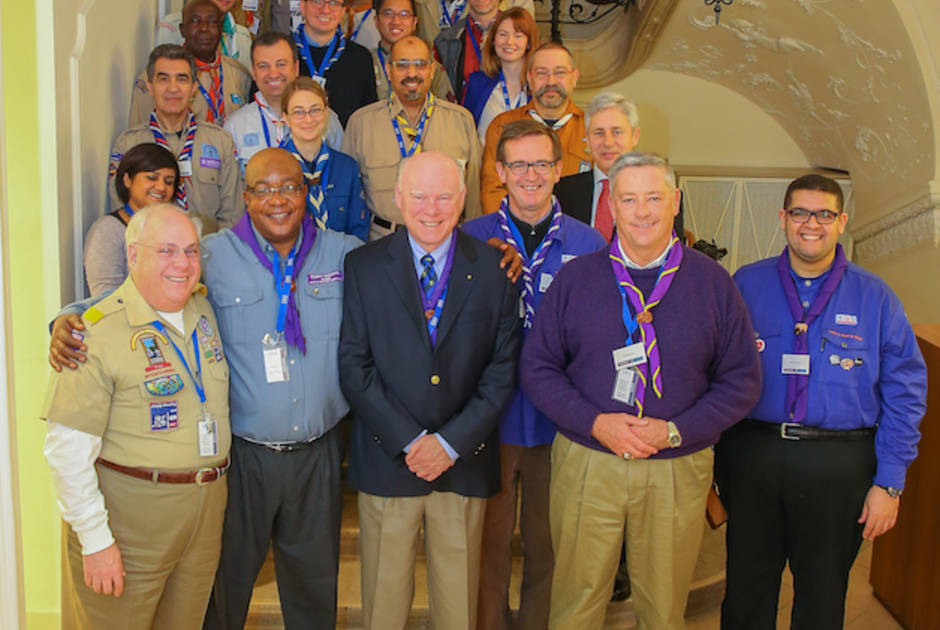 The first joint activity of the World Organization of the Scout Movement (WOSM) and the King Abdullah Bin Abdulaziz International Centre for Interreligious and Intercultural Dialogue (KAICIID) was held 21 to 24 February in Vienna, Austria. The interreligious dialogue brought together 37 Scout leaders who represented diverse cultures and religions from around the world.

In a welcome address to the Scouts, KAICIID Deputy Secretary General Claudia Bandion-Ortner said, "KAICIID highly values and respects and recognizes the enormous collective experience present in this room today, comprising many well-regarded individuals from all over the world who have worked in intercultural and interreligious education and dialogue for many years. We aspire to offer a networking point and a learning platform."

WOSM Secretary General Scott Teare described in his keynote address how the Scout Movement directly engages at least 40 million people in 200 countries and territories. He emphasized dialogue's role in the Scouts' mission: "The Scout Movement not only transforms lives, it also saves lives". A prime example of this is the “Ticket to Life” initiative in the Philippines, which supports homeless and troubled youth in finding a new and secure life through their experience with Scouting. WOSM’s flagship initiative “Messengers of Peace” also utilizes dialogue to create networks that, according to Secretary General Teare, "connect kids to kids. They are ‘conspiring’ to make peace. In that interaction, when they learn what is important in each other’s lives, borders disappear." Amongst the projects showcased at the workshop were peacebuilding and mediation initiatives from Africa, Asia, the Middle East and Europe.

Each project represents a significant initiative by the Scout Movement to foster dialogue, mutual understanding and acceptance amongst young people from various world regions with distinct challenges and opportunities in interreligious and intercultural interaction.

The three-day programme, jointly designed by KAICIID and WOSM, was a learning opportunity to share best practices on dialogue in Scouting as well as to enrich the dialogical solutions provided by KAICIID to stakeholders around the world.

This workshop is the first result of the memorandum of understanding concluded between KAICIID and the World Scout Foundation at the KAICIID Global Forum in November 2013. The memorandum lays out modes of cooperation between the two organisations, in particular in outreach to youth and youth leaders. The memorandum also expresses the intention of KAICIID and the WSF to use dialogue as a tool to promote a responsible way of living the spiritual and religious dimension within their respective communities, and the joint preparation of dialogue training for Scouts.

ABOUT THE WORLD ORGANIZATION OF THE SCOUT MOVEMENT

The Scout Movement is a voluntary non-political educational movement for young people. It is open to all, without distinction of gender, origin, race or creed, in accordance with the purpose, principles and method conceived by the founder, Robert Baden Powell. The goal of the Movement is to contribute to the development of young people in achieving their full physical, intellectual, emotional, social and spiritual potential, as individuals, as responsible citizens and as members of their local, national and international communities.