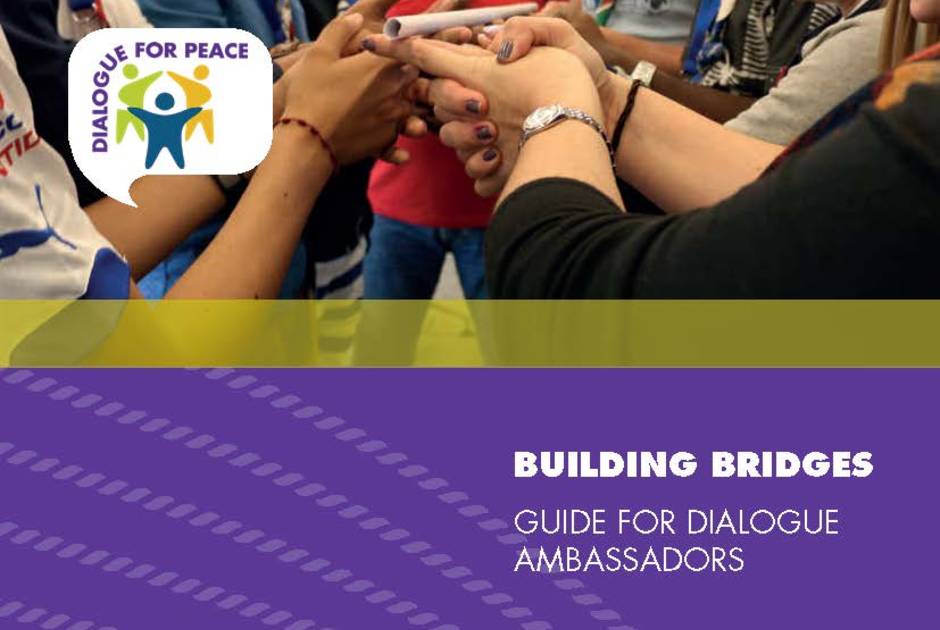 A new training manual on dialogue designed to provide Scouts of all ages with the ability and knowledge to understand and participate in dialogue, as well as to teach others the necessary skills to initiate dialogue has been published by the World Organization of the Scout Movement (WOSM) and the International Dialogue Centre (KAICIID).

“Building Bridges: A Guide for Dialogue Ambassadors” was launched on April 25 and is one of the results of a long-term collaboration between the two organisations.

The manual offers Scouts at all levels the skills and knowledge needed to understand, participate in, design, and facilitate dialogues, as well as to train others in these areas.

KAICIID Secretary-General Faisal Bin Muaammar said the guide would help foster dialogue between people of different faiths and cultures: “We can bridge animosities, we can reduce fear of the other, and we can deepen mutual respect,” he said. “Interreligious and intercultural dialogue helps to build communities’ resistance against prejudice, strengthens empathy, supports conflict prevention and transformation, and preserves peace”.

WOSM Secretary-General Ahmad Alhendawi said: “We should promote dialogue as a goal and not only as a means (to an end).  We should find new ways to bring young people into peace building.”

The guide lays out the rules and conditions for effective dialogue, recognising that Identity, culture and our unique partisan perceptions form the context in which any dialogue takes place. In addition, it offers a firm grounding in these interpersonal psychological and cognitive phenomena and utilises the lessons learned to frame discussions that can help prevent and reconcile conflicts.

“Building Bridges” also provides a practical framework for dialogue design and facilitation, and the creation of a ‘safe space’ to give dialogue participants with the confidence to acquire new insights. In a series of concrete steps, the Guide explains how to create a ‘space’, which will provide the best possible environment for authentic dialogue. In addition to the theory and case studies, the manual offers practical exercises that enable Scouts to improve their proficiency and earn badges for personal use, as a dialogue facilitator and as a dialogue trainer. The guide also offers Scouts suggestions on promoting dialogue and principles of dialogue, such as respect and learning, that they can use not only in dialogue training, or modelling behaviour that enables dialogue, but also in their communication through social media and in daily life.

More specialised manuals that will provide in-depth information on facilitation and training in dialogue are being developed by KAICIID and WOSM, and will be released later in the year.

“Building Bridges” is available for download on www.scout.org/dialogue-ambassadors-guide and www.kaiciid.org/publications-resources

KAICIID is an intergovernmental organisation that promotes the use of dialogue globally to strengthen social cohesion and to enhance understanding and cooperation. The centre was founded by the governments of Austria, Saudi Arabia and Spain with the Holy See as its Founding Observer. Its Board of Directors comprises prominent representatives from five major world religions (Buddhism, Christianity, Hinduism, Islam and Judaism).

About the World Organization of the Scout Movement (WOSM)

Scouting is one of the world’s leading educational youth movements, engaging millions of young people around the world to be active citizens and create positive change within the communities where they live. Founded in 1907, WOSM is an independent confederation of 169 National Scout Organizations in a network of 50 million Scouts in at least 224 countries and territories around the world.