The role of religious leaders in post-COVID Latin America 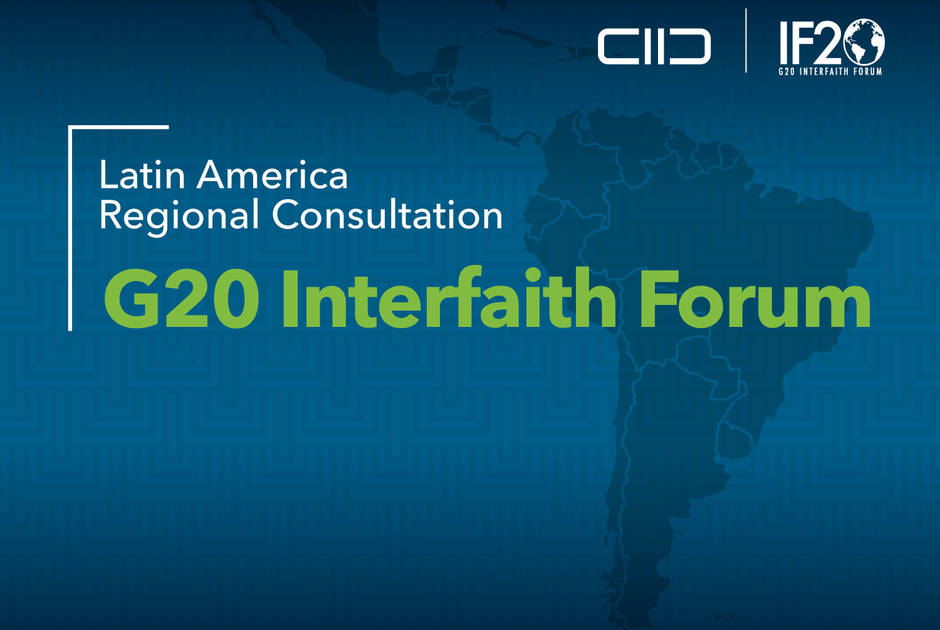 Religious leaders, policymakers and experts from Latin America gathered in a virtual consultation to discuss how religious voices can strengthen the regional response to the COVID-19 pandemic, which has found its new epicenter in Latin America.

The consultation forms part of the G20 Interfaith Forum process, which connects religious communities from across the world in a wide-ranging process of consultations on themes ranging from the impact of the disease to governance and faith, socio economic challenges and protection of the environment.

The International Dialogue Centre (KAICIID), with key partners the G20 Interfaith Forum Association, the United Nations Alliance of Civilizations (UNAOC) and Saudi Arabia’s National Committee for Interfaith and Intercultural Dialogue are jointly supporting the consultations, which will help shape a final series of recommendations to world leaders attending the G20 summit, scheduled to take place in Riyadh in November.

Speaking of the rationale behind the meeting, Ambassador Alvaro Albacete, Deputy Secretary General of KAICIID said: “The COVID-19 crisis is refocusing global agendas. This is a time for dialogue, so that we can alleviate the suffering caused by the pandemic, but also address the systemic inequalities it has exposed.”

Every country in the region has so far reported cases, and while Latin America's two most populous nations, Brazil and Mexico, have seen the highest number of deaths - more than 67,000 and 32,000 respectively, Peru, Chile and Ecuador have also been severely affected, reporting thousands of cases and deaths. As experts warn that the peak of the pandemic in Latin America may still be weeks away, religious communities have come together, as in many other parts of the world, to provide aid and spiritual support to sufferers. At the same time, religious communities have found themselves unable to worship in the ways they are used to, as services, weddings, baptisms, funerals and other rituals and rites are subjected to public health regulations.

“Policy needs to take religious voices into account, and policymakers and religious leaders need to learn and listen to each other. Latin America has a long tradition of interreligious coexistence, and sustained dialogue between religious communities and policymakers,” Albacete said.

“Latin America is a region with immense social and economic challenges where faith communities play a fundamental role in achieving coexistence, dialogue and social equality. Transferring that valuable and rich experience to the G20 leaders is vital and urgent," said Rebeca Grynspan, Secretary General of Ibero-American General Secretariat and former Second Vice-President of Costa Rica during the meeting.

Addressing the participants, Cardinal Pedro Barreto, Archbishop of Huancayo and Vice-President of the Peruvian Bishops Conference, referred to the grave economic impact that the pandemic has had on the most vulnerable segments of Latin American societies.

“The COVID-19 pandemic is a democratic pandemic, it is global with regards to its exponential propagation. At the same time, however, it is elitist when it comes to treatment. Many brothers and sisters in our region are suffering the consequences of a health system that does not cater to vast portions of the population", he said.

Rabbi Michael Schlesinger from the Israelite Paulist Congregation (IPC) in Argentina addressed the importance of interreligious dialogue to confront this unprecedented pandemic. “We are witnessing enormous challenges. These challenges are not Christian, Muslim or Jewish challenges. They are human challenges. For this reason, I recommend that we continue to strengthen the muscles of dialogue and encourage rapprochement between believers of different religions", he remarked.

The Latin America consultation comes in the wake of two other regional meetings, encompassing the Arab region and Europe, where religious leaders, policymakers and experts discussed topics such as strengthening social cohesion and promoting peaceful coexistence, protecting the environment, fostering common citizenship, dialogue, the protection of minorities and the prevention of hate speech.