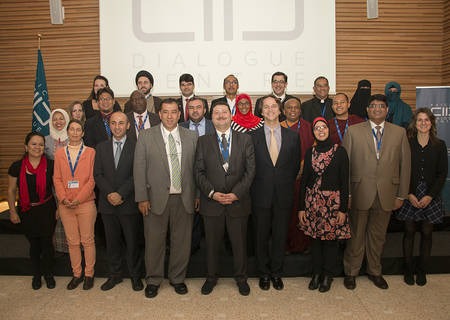 The first graduates of the KAICIID International Fellows Programme (KIFP) graduated on 1 December 2015 in a ceremony that came as the culmination of a year-long intensive programme of training, exchange and action. The Fellows agreed that their participation had contributed to their personal transformation, and advanced their respect for dialogue and its potential for peace.

The KIFP is the flagship programme through which KAICIID reaches out to active interreligious dialogue practitioners to further train and equip them to be more effective peacemakers and to promote IRD in their own communities. The goal of the programme is to establish a sustainable global network of Fellows from different faith traditions from all over the world, including conflict areas like Nigeria, Iraq and Myanmar, or from academic institutions in the Middle East, Europe, the Americas and Asia.

“Through these trainings we are giving the Fellows the tools they will need to be more effective peacemakers in their communities,” said KAICIID Director General, Fahad Abualnasr. “These methods amplify the reach and effectiveness of these already influential practitioners. We will continue to support the role of these local leaders as leaders of dialogue, and trainers of future dialogue facilitators.”

The 20 Fellows from the 2015 alumni came from 16 different countries, five continents, five religions, 14 academic institutions and eight religious and interreligious centres. They are mid-career professionals, some of which were experienced in IRD and were looking for further training, while others were new to interreligious dialogue and needed to build a practical foundation of methods and tools.

Reverend Alexander Goldberg, KAICIID Fellow and Jewish Chaplain of Surrey University in Surrey, England, said that the level of diversity among participants made it a unique experience that allowed him to see the world from the perspective of other IRD practitioners of different nationalities, faiths and professions.

During their participation in the programme, each participant implemented a Fellows initiative, which is a micro-funded IRD activity that promotes peacebuilding, dialogue or conflict transformation at the grassroots level. The initiatives from the 2015 alumni have already reached hundreds of people all over the world and included dialogues, university courses in IRD, a book on dialogue, and women and youth trainings in sensitive communities.

During the trainings, the Fellows designed the contextually specific initiatives with the guidance of KAICIID staff and their colleagues, which allowed them to translate their KAICIID training into dialogue activities that had transformative effects on participants of their initiatives.

One Fellow, Katende Abdul-Fattah, a lecturer at the department of Religion and Peace Studies of Makerere University in Kampala, Uganda, designed a training of trainers for his students that enabled them to spread dialogue methods to primary schools throughout Uganda. He reported profound changes in his participants after exposing them to dialogue and instructing them in interreligious dialogue methods.

“Participants begin seeing others not as enemies to be won over, which was a very big transformation in them,” he said, referring to their initial prejudices and inhibitions. “There is a lot of transformation among the students – you see a lot of prejudices, mistrust and misunderstandings, and by the time you finish, all of them understand IRD very well. It has a fundamental effect on them.”

The Fellows were also exposed to dialogue firsthand during their trainings, and reported that they also underwent fundamental transformations through the dialogues that they participated in. To them, this understanding was key in becoming effective dialogue practitioners.

“I really learned in my heart that you understand yourself much more through dialogue, so you can be better and more honest with people when engaging in dialogue,” said Jessica Sitek, 2015 Fellow and lecturer in comparative religion at Macomb Community College in the US. “The same thing is happening on the other end. That allows you to go deep and get close because you realise that you’re both being vulnerable and being really honest about who you are.”

The training also helped them to understand the difficulties of dialogue and how to overcome the challenges of prejudice and misunderstanding.

“Meaningful dialogue is not for the faint of heart. Given different worldviews based on culture, religious frameworks, familial and economic backgrounds there are going to be misunderstandings, disagreements, and sometimes outright disbelief that the ‘other’ can really see the world as they do,” said Janani Carpenter, a Hindu, who, along with Nourah Alhasawi, a Muslim, is writing a book on their experiences of the transformative power of dialogue for their Fellows project. “The process falters, stalls, and sometimes becomes heated. If one has a tendency to run away, or not fully engage in the process or with the other participants, there is no dialogue.”

The Fellows are now a part of a network that will continue to expand each year as KAICIID trains more Fellows. The network is one of the most important benefits for the Fellows, who are now depending on one another globally for counsel, best practices and moral support.

“Now we know how important the role of peace ambassador to construct a better world for everyone,” said A Shin Mandalar, a Buddhist monk from Myanmar who engaged youth from different religious backgrounds Mandalay in a three-month interreligious training programme for his project. “We must be open our hearts and contribute to all parts of the multi-polar society, united by a shared passion and search for reality and peacefulness.”

The Fellows Programme will continue into 2016. Twenty religious educators and scholars from around the world have been accepted into the second KAICIID Fellows Programme. Almost half of them come from countries that are currently undergoing periods of violent conflict with religion as a factor, such as Pakistan, Sri Lanka, Myanmar, Nigeria and Iraq.

The new course was welcomed by the class of 2015 and had the opportunity to share experiences and support. The new Fellows took part in their first of three trainings in December, in which they were introduced to the programme and learned the purpose of dialogue and its role in peacebuilding. They also discussed teaching dialogue, social media literacy and models, methods, theory and practice. 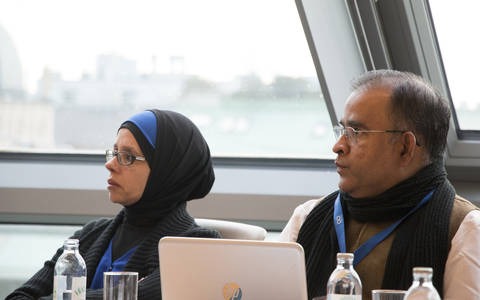