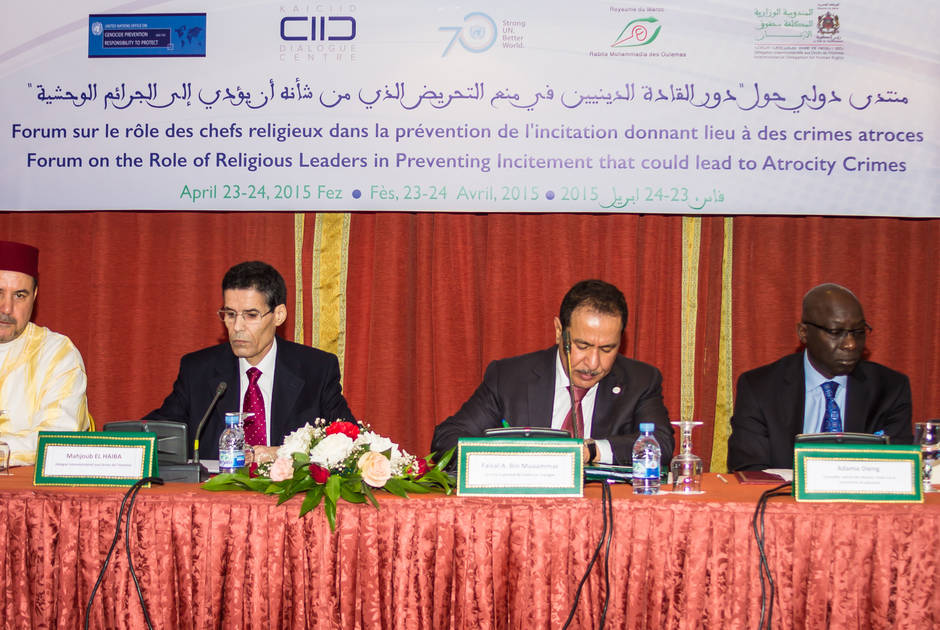 Fez, Morocco, 24 April 2015- Participants at the Forum with religious leaders organized by the United Nations Office on Genocide Prevention and the Responsibility to Protect, the King Abdullah Bin Abdulaziz International Centre for Interreligious and Intercultural Dialogue (KAICIID), the Interministerial Delegation for Human Rights (DIDH) and Rabita Mohammadia of Ulama of Morocco, today developed a “Plan of Action for the Prevention of Incitement to Violence that could lead to Atrocity Crimes.”

“Monitoring” Incitement to violence that could lead to atrocity crimes to ensure a differentiated and effective response. This diagnosis will focus on questions such as “Who incites?” “Through which medium”? “Who listens” and “who reacts”?

Developing, speaking out, and circulating “alternative” messages to counter incitement and hate speech using the media, including social media.

Engaging in or strengthening inter-religious and intra-religious dialogue and activities in order to ensure understanding, respect and communication. This could be achieved through joint visits to places of worship, joint peace prayers, and joint activities at the community level.

Engaging in dialogue on grievances: Address topics that religious extremists monopolize, including through accurate and nuanced viewpoints, targeting those who may be particularly vulnerable to incitement to atrocity crimes;.

Strengthening clarity of thinking and of message: acknowledge and respect the right to religious freedom and belief (article 18 of the International Covenant on Civil and Political Rights (ICCPR)).

Engaging with political leaders:  to promote engagement between religious and political leadership to strengthen political support for the prevention of incitement; advocate for appropriate legal and policy reform as per the Rabat Plan of Action (adopted in Rabat, Morocco on 5 October 2012).

The Plan also recommends several other actions including dialogue training; mapping and networking of religious leaders who actively work to prevent or counter incitement that can lead to atrocity crimes around the world; engaging with youth and ensuring a gender perspective in all actions proposed and undertaken.

The Special Adviser on the Prevention of Genocide acts as a catalyst to raise awareness of the causes and dynamics of genocide, to alert relevant actors where there is a risk of genocide, and to advocate and mobilize for appropriate action.

KAICIID is an intergovernmental organization whose mandate is to promote the use of dialogue globally to prevent and resolve conflict, to enhance understanding and cooperation . Over a seven-year-long negotiation and development process, KAICIID’s mandate and structure were designed to foster dialogue among people of different faiths and cultures that bridges animosities, reduces fear and instills mutual respect.

About the Inter-ministerial Delegation for Human Rights

The Inter-ministerial Delegation for Human Rights (DIDH) in Morocco is a governmental authority, that works to implement government policy related to the defense, respect, protection and promotion of human rights in coordination with the Moroccan government departments and collaborating organizations.

About the Rabita Mohammadia of Ulama of Morocco

The Mohammadia Association of Scholars is an institution of public interest headquartered in Rabat, Morocco. It serves academics by achieving the goals of educating people about the values of moderate Islam, cooperating with organizations with similar goals in order to promote the academic and cultural aspects in Islamic education, and enhancing cooperation among thought leaders, experts and educational institutions.

The statement is also available in French.