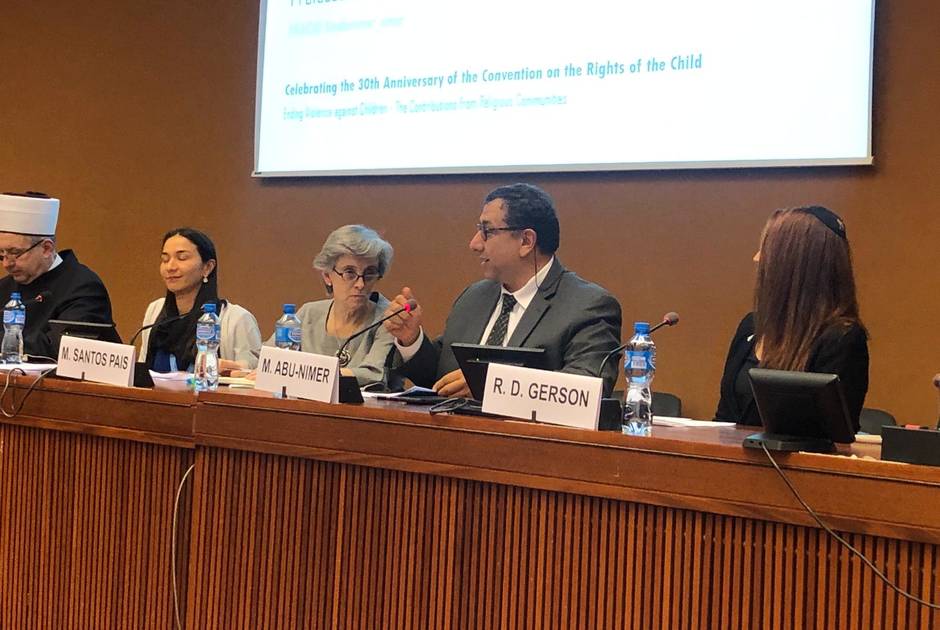 To commemorate 30 years of the Convention on the Rights of the Child, KAICIID in partnership with Arigatou International, UN partners, the African Union, governments of Germany, Mexico, Morocco, UAE and other partners, gathered an interreligious panel to explore the role of religious leaders and communities in promoting human rights and protecting children.

Held on the sidelines of at the 40th session of the Human Rights Council in Geneva on 6 March, the panel brought together religious leaders, human rights experts and representatives of UN member states to share successes and examine how religious communities have worked closely with the UN and its member states over the past 30 years to promote the rights of a child.

Religious leaders have an important role in protecting children in their communities, and through their leadership, can challenge and shape social and cultural norms that condone violence. As trusted figures within their communities, religious leaders are uniquely positioned to promote the well being of children and can speak out against practices such as female genital mutilation, abuse and neglect.

KAICIID representatives His Eminence Metropolitan Emanuel, of the Board of Directors, Amb. Alavaro Albacete, the Deputy Secretary General, and Prof. Mohammed Abu-Nimer, Senior Adviser, presented KAICIID’s experience and the role of interreligious cooperation in supporting the rights of the child, and the key role that interreligious dialogue can play.

Mohammed Abu-Nimer spoke on how, together, different religious communities can work together to protect the rights of children and build stronger inter-communal relations.

“Violations and abuse of children is a disease that cannot be cured without engaging all communities – Muslim, Christians, Buddhist, Hindu faith groups,” said Abu-Nimer. “Multi-religious action ensures that action is taken across the full community rather than a section of it if only one religion is involved. This helps ensure a more sweeping action and strengthens the chance of success.”

Additionally, during the event the preliminary results and recommendations of the Interfaith Study on the 1989 Convention on the Rights of the Child were also presented.

Signed in 1989, the United Nations Convention on the Rights of the Child (CRC) is a human rights treaty requiring that ratifying countries act in the best interests of the child, guaranteeing that every child has basic rights, including the right to life, to their own name and identity, to be raised by their parents within a family or cultural grouping, and to have a relationship with both parents, even if they are separated.