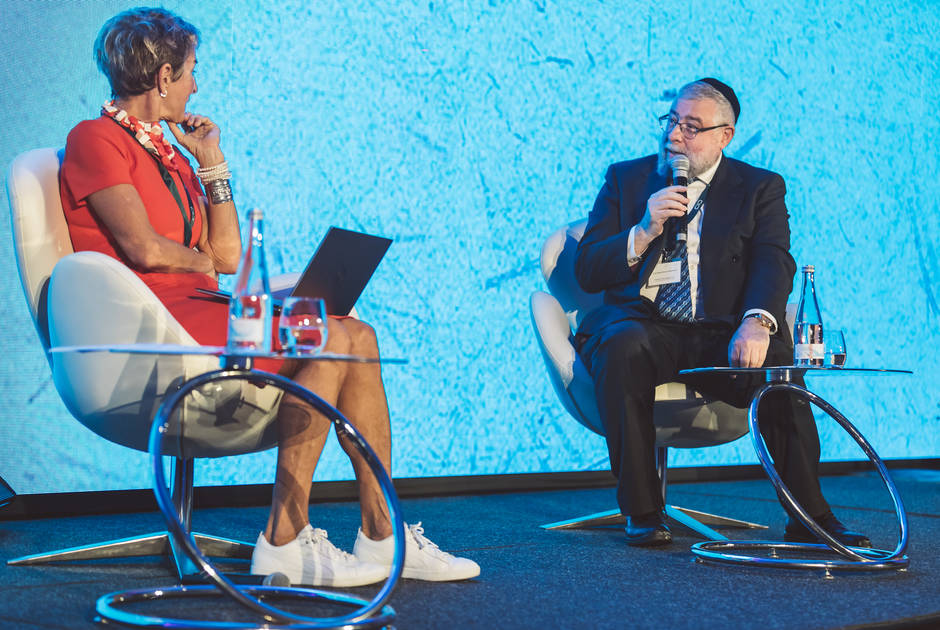 On its third and final day, participants at the European Policy Dialogue Forum in Lisbon called for stricter regulation, improved education and increased protection for refugees and migrants in the face of rising hate speech and incitement to violence in Europe.

Held from 19-21 October in Lisbon, the third day of the annual forum invited participants to address the increasing threat of hate speech and discrimination. The special session was organized by the International Dialogue Centre (KAICIID) in partnership with the European Council of Religious Leaders/Religions for Peace Europe (ECRL/RfP Europe) and with the support of the OSCE’s Office for Democratic Institutions and Human Rights (ODIHR).

Giving his last speech in his capacity as KAICIID Secretary General, Faisal bin Muaammar reiterated his firm commitment to combatting hate speech, which has been a hallmark of his last 9 years of service in interreligious dialogue, culminating in the Power of Words conference in Vienna in 2019.

“Hate speech comes in diverse shapes and forms of expression, humiliating, vilifying and inciting hatred against a particular group of people. As we have all witnessed over the last decade, the spread of hate speech has intensified in many parts of the world and its regulation presents a conundrum for many countries,” bin Muaammar said.

Since the start of the pandemic, hate speech has increased significantly against refugees, migrants and religious minorities. Recent studies have shown that both Islamophobia and anti-Semitism are on the rise. Migrants and refugees have been vilified as a source of the virus and denied access to medical treatment.

According to Dr. Maria Marouda, Chair of the European Commission against Racism and Intolerance, many cases of hate speech are linked to politicians or public officials, often at the highest levels of government. These have targeted “migrants, Roma, Muslims, Jews, black and LGBTI persons. Sometimes they play a central role in portraying minorities and migrants negatively and scapegoating them for societal problems.”

Schinas: “Their grief is used as a weapon to divide our unity”

Margaritis Schinas, Vice President of the European Commission with the portfolio of Promoting the European Way of Life acknowledged that migrants and refugees are sadly often instrumentalised by authoritarian governments. “Their grief is used as a weapon to divide our unity and to undermine our European way of life. They are pushed at our borders to exercise political pressure,” he said.

As social media has amplified cruel and extremist messages, hate speech has become an uncomfortable grey area within international law. Many governments have struggled to define it, as well as to prosecute hatred, while balancing freedom of expression.

Although there are many definitions of hate speech, Thomas Wipf, President of the European Interreligious Council of Religious Leaders – Religions for Peace Europe points to the UN definition which “names hate speech based on ethnicity, race, colour, gender, and other identity factors such as religion.”

Wipf: “We must become aware of how we speak to each other”

Before jumping into policy recommendations, however, Wipf challenged participants at the forum to take “a look in the mirror first. Religions are, in reality, quite often in a kind of competition with one another,” he said. Concern for our own tradition, instrumentalisation of religion for political or nationalist interests makes it urgent that we always become aware of how we speak about others, asking ourselves how we talk about people and traditions that are not ours.”

Nedzad Grabus, Mufti of the Islamic Community in Slovenia says that interfaith alliances and organizations can help religious leaders unite together on addressing shared threats and take stock of harmful biases and perceptions in their own communities.

Grabus belongs to a number of these organizations and is co-Chair of the KAICIID-supported Muslim-Jewish Leadership Council which collaborates on issues such as Islamophobia, anti-Semitism and xenophobia in Europe. The Council also offers expert advice to EU bodies on legislation which directly affects Jewish and Muslim religious and traditional practices, such as clothing, circumcision and slaughter regulations.

“Through our engagement in the past years, we have learned how important it is to listen and to learn about each other’s experiences, as well as the importance of working together on hate speech and the different kind of phobias that affect minority groups,” Grabus said. “We believe it is important to specifically engage in meaningful dialogue with those we do not agree with. Cooperation is the only way of reaching peaceful solutions to our disputes.”

Santos Silva: “In Portugal, all religions are equal before the law”

Augusto Santos Silva, Minister of State and Foreign Affairs of Portugal says his country’s appreciation for religious diversity has helped “safeguard respect for diversity, the rule of law, and furthered peace and security.”

“Portugal is a multireligious society,” he continued. “Most of our population is Catholic but we have Protestant, Orthodox, Jewish, Muslim, and other religions, as well as non-believers and agnostics.

In our view, pluralism enriches societies. The right to freedom of thought, freedom of conscience, religion or belief is a basic constitutional right in Portugal. All religions are equally recognized before our law.”

According to Kishan Manocha, Head of the Tolerance and Non-Discrimination Department at the OSCE Office for Democratic Institutions and Human Rights (ODIHR), because religious leaders are often in touch with vulnerable and marginalised communities, they are well positioned to deal with hate speech, as well as the global challenges which often drive it.

“ODHIR has come to understand that under the right conditions which enable their meaningful participation in society, religious actors and faith-based organizations can make a decisive contribution to addressing the manifold interlinked challenges of our time, whether social, economic, environmental or humanitarian. In fact their contributions can be civilizational,” he said.

Discussions on policy continued throughout the afternoon during working group sessions which discussed online regulation for hate speech, protection for refugees and migrants who have been particularly vilified during COVID-19, cross-sectoral partnerships between religious leaders and policymakers on combatting hate speech, and increasing civic participation and inclusive decision-making.

“Social media is destabilizing our democracies, our systems and amplifies hate speech. We have to demand responsibility, control and regulation,” he said.