Religious, Community Leaders: Truth and Trust will Overcome Conflict in Nigeria as One 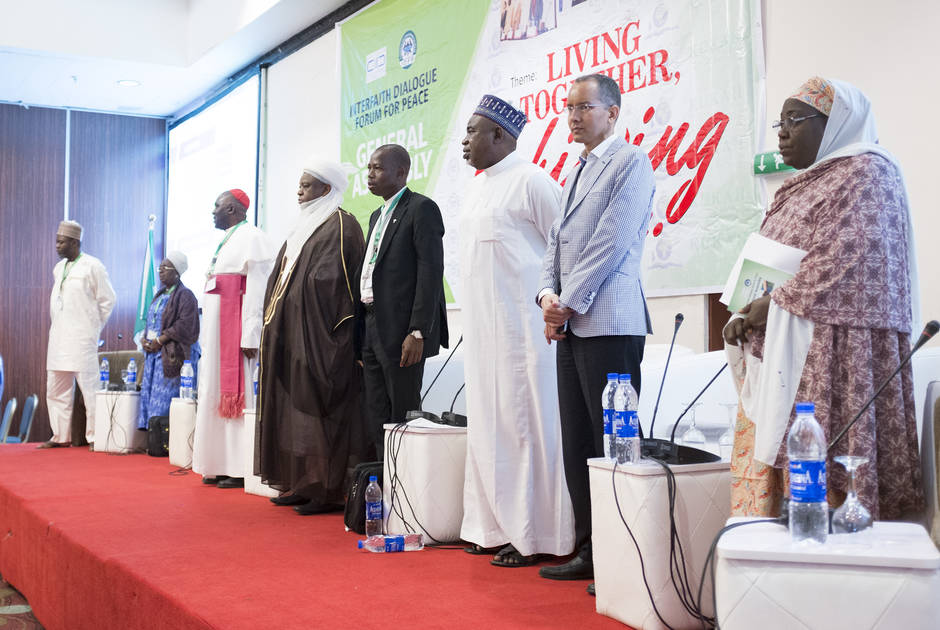 19 January, Abuja: The Interfaith Dialogue Forum for Peace of Nigeria held its first General Assembly on 18 January under the theme ‘Living Together, Achieving Together’, bringing together more than 100 delegates from all over Nigeria. The conference was attended by H.E. Sultan Muhammadu Sa'ad Abubakar III​; a representative of the President of the Christian Association of Nigeria; and the Archbishop of Abuja, John Cardinal Onaiyekan, among others.

A Communique drafted by participants called on the religious and community leaders of Nigeria to preach truth to overcome religious and tribal differences and work together as a family for peace.

Sultan Muhammadu Sa'ad Abubakar III​ encouraged those present to overcome problems in Nigeria as a family, "from the megachurch to the littlest mosque" and to speak truth and believe and trust one another, and not call upon their followers to take up arms.

The Sultan said: “What we need is to sit down and dialogue. As religious leaders, we have to be very careful with what we say, because it carries weight, our followers listen to us very seriously. We must believe in one another, trust and love ourselves because that is what our two major religions advocate. We must continue to speak with one voice.“

The representative of the President of the Christian Association of Nigeria said: “This is time for us to speak with one voice.” He called on religious leaders to to avoid divisive rhetoric and to approach peace as Nigerians, rather than be split among religious, ethnic or tribal lines. “We religious leaders, we serve people a lot. We say one thing when we have another thing in mind. Our tribal and religious affiliations have overshadowed our Nigerianness.“

The Archbishop of Abuja, John Cardinal Onaiyekan, said: “Nothing happening in this country is beyond us. We shouldn’t be praying for peace, when in the real sense, we are the ones causing crises everywhere. Talking for peace will give peace if there is truth. So, we must learn to build trust, trusting one another.”

The Conference was organized by the Interfaith Dialogue Forum for Peace in partnership with the International Dialogue Centre (KAICIID), and the Nigerian partners the Institute for Peace and Conflict Resolution, the Interfaith Mediation Centre and the Kukah Centre. It was the third in a series of conferences held to provide a platform for Nigerian religious leaders.

The IDFP is composed of 110 religious and community leaders whose mandate is to implement the action plan laid out by previous conferences titled ‘Coordinate to Achieve’. It is composed of the General Assembly, a Central Coordination Council – 40 members meeting quarterly – out of which 10 members form the Executive Council, who meet bi-monthly.

COMMUNIQUE OF THE FIRST GENERAL ASSEMBLY OF THE INTERFAITH DIALOGUE FORUM FOR PEACE (IDFP) THAT TOOK PLACE AT THE LADI KWALI HALL, SHERATON HOTEL, ABUJA, ON THURSDAY, JANUARY 18, 2018.

The Interfaith Dialogue Forum for Peace (IDFP) at its first General Assembly, with the theme: ‘LIVING TOGETHER, ACHIEVING TOGETHER’, with over 100 delegates drawn from religious and traditional institutions, among others, across the country unanimously agreed on the following points:

1.     Amidst various ethnic and religious tensions across the country, the FORUM reiterated its commitment to ONE INDIVISIBLE Nigeria bounded in truth and love as our diversity being the source of our beauty.

2.      There must be an urgent need to stop the killings of innocent lives and destruction of property, as it recognizes the sanctity of life and as such, the Federal Government must scale up its security apparatus to STOP the indiscriminate killings.

3.     The FORUM frowned at the politicization of killings of Nigerian citizens using religious and tribal identities. The General Assembly resolved that any Nigerian life that is lost must be seen as a Nigerian without reference to their religious or ethnic identity.

4.     The FORUM also called on all well-meaning Nigerians to condemn any form of HATE SPEECH in order to avoid dragging the nation into any further chaos, especially as we move towards 2019 general elections.

5.     The FORUM also identified the need for preachers and adherents of all religions in Nigeria to respect one another and uphold the sanctity of places of worship.

6.     The FORUM equally emphasized the dire need for Truth, Respect and Trust among faith leaders and the political class to engender peaceful co-existence among citizens.

7.     The FORUM also resolved that henceforth religious leaders and institutions should collectively condemn any evil act committed in the country without putting into consideration identities of perpetrators or victims.

8.     The FORUM unanimously agreed that government at all levels must urgently address the issue of unemployment among youths and citizens because when citizens have no jobs, they are easily lured into all forms of crimes.

9.     The rate at which youths are going into drugs is very alarming, hence, the FORUM called on parents and guardians to take the issue of child/ward’s upbringing seriously.

Finally, the 1st General Assembly of the IDFP recognized the support of KAICIID International Dialogue Centre, His Eminence Sultan Sa’ad Abubakar III, the CAN President, Rev Samuel Ayokunle, John Cardinal Onaiyekan, among other traditional and religious leaders, for the success of  the General Assembly.

In view of the above, the FORUM resolved to carry its activities to the grassroots so as to foster integration and understanding among Nigerians.