Public Lecture on Sources of fear and how to overcome it 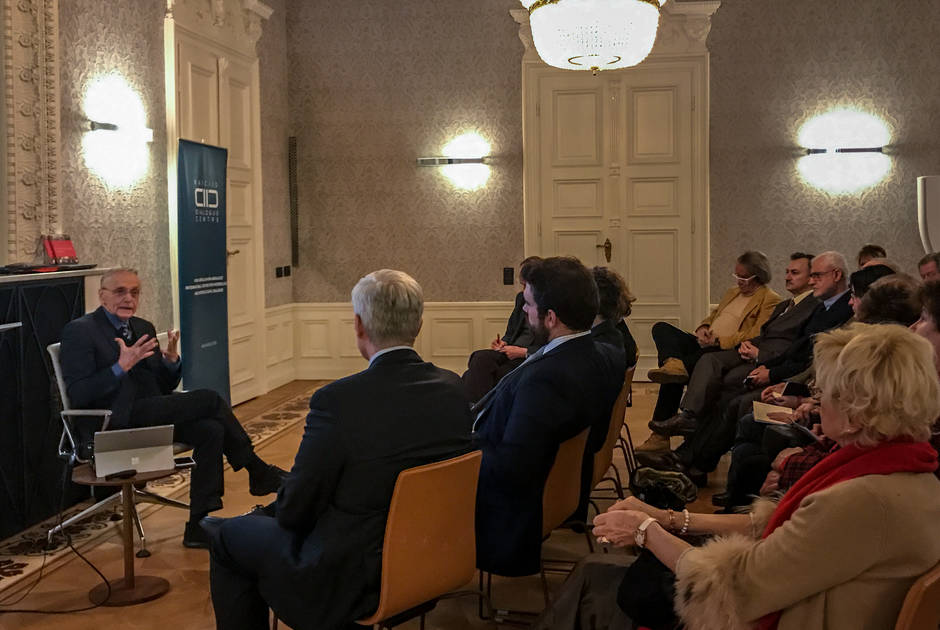 “The only thing we have to fear is fear itself”

Franklin D. Roosevelt made this famous statement in the depths of the Great Depression, but it remains just as valid today. This was the theme of Prof. DDr. Paul M. Zulehner’s lecture on “Sources of fear and how to overcome it” held at the International Dialogue Centre (KAICIID) on 18 January 2018. Prof. DDr. Zulehner is a theologian and Catholic priest and one of the most renowned personalities in interreligious dialogue in Austria and Europe.

As part of the Centre’s “Religions in Dialogue” series of expert lectures, Prof. DDr. Zulehner spoke to the audience about the sources of fear and the potential ways of overcoming it, particularly against the backdrop of the populist, nationalist and Islamophobic tendencies triggered by the increased presence of migrants. Starting with the concepts of basic trust and primordial fear, Prof. DDr. Zulehner explained that it is, in fact, fear that triggers evildoing and how living trustfully within this fear is among the core responsibilities of religion. Fear dissolves solidarity, and is immune to moral arguments, which in turn amplifies the divisive power of a politics of fear. In times when the collective fear of a society is on the rise, when people feel insecure or threatened, a politics of trust is needed. Otherwise, this climate of fear is fertile ground for populist and nationalist political power to gain momentum.

Based on recent public opinion surveys he conducted, Prof. DDr. Zulehner presented to the audience the main fears people have today (fear of loneliness, economic fear, cultural fear, the fear of not having enough, among others) and what feelings they associate with the long-term effects of sharing civic life with migrants: more than 50% are ‘concerned’, less than 20% are “angered”. An even smaller number refer to themselves as ‘confident’.

He reiterated how fear creates rejection and hostility and leads to a decrease in social cohesion and solidarity and that it is, therefore, crucial for politics to foster a “society based on solidarity through a politics of trust, education and regular interreligious and intercultural encounters.

KAICIID regularly hosts public lectures in German-language on world religions, interreligious dialogue and coexistence at its historic headquarters in Vienna. The next public event, a lecture and photo exhibition by Rabbi Schlomo Hofmeister on “Interreligious Encounters in India” will take place on 06 February 2018. To register, and to be added to our mailing list, send us an email at [email protected]