President of the Parliament of the United Arab Emirates Visits KAICIID, expresses Support for Centre’s Work of Interreligious Dialogue 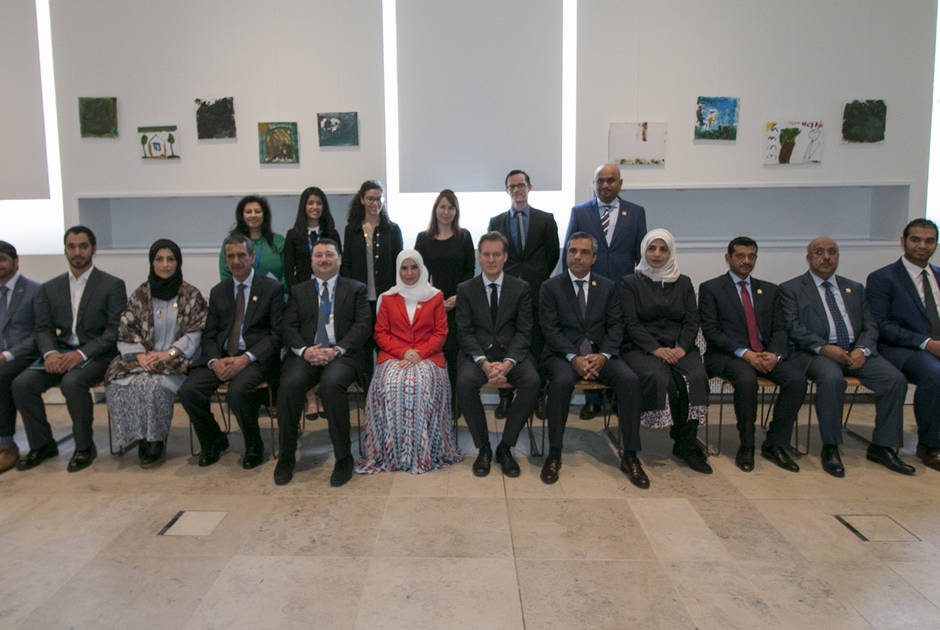 The guests were greeted by KAICIID Director General, Fahad Abualnasr on behalf of the Secretary General, HE Faisal Bin Muaammar. The KAICIID delegation, composed of the Director General, Deputy Secretary General of External Relations Ambassador Alvaro Albacete, KAICIID Senior Advisor Dr. Patrice Brodeur, and Director of Communications Mr. Peter Kaiser, provided the guests with an overview of KAICIID’s work, and explained the vision and mission of the organization.

The presentation was received with interest by the delegation. Dr. Amal Al Qubaisi expressed her thanks to KAICIID for its work. She congratulated the KAICIID team for being pioneers in the field of interreligious dialogue.

She said: “It sends a message that at the end of the day no matter what the differences are between religions, we are all humans who are looking for ways to be better... When you see how the effects of extremism have built certain ideologies where people tend to fight back in the name of religion, (and using especially Islam) to try to make sense of nonsense… we feel that Islam has been hijacked from us, and in order to get it back…we have to be forceful, thoughtful, and united. For Islam as a religion (of peace) to come back to us, we need all other religions to work with us because what is happening now is against humanity – it is against the mission we are here for.”

At an earlier meeting, Dr. Al Qubaisi and Austrian Federal President Heinz Fischer discussed the importance of interreligious dialogue, especially in the context of rising extremism and terrorism in Europe and elsewhere, and the challenges of the refugee crisis. In January, President Fischer provided a lecture at the Centre on dialogue and its applications in building peace worldwide.

This support was gratefully acknowledged by the KAICIID Director General Abualnasr. He welcomed suggestions for cooperation from the parliamentary union.

Mr. Abulanasr stressed the importance of partnerships for KAICIID’s work, which relies on support from policymakers and religious leaders and institutions for impact at the grassroots level.