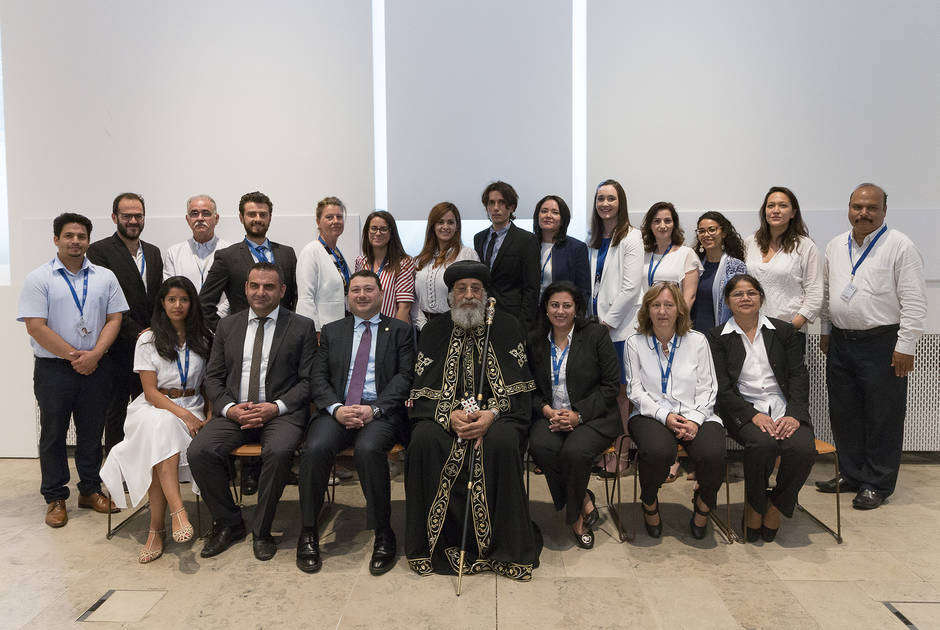 Coptic Orthodox Pope Tawadros II, Pope of Alexandria and Patriarch of the See of St. Mark praised the role of the King Abdullah bin Abdulaziz International Center for Interreligious and Intercultural Dialogue (KAICIID), during his first ever visit to the Centre in Vienna, on Friday July 13th.

His Holiness lauded the KAICIID International Dialogue Centre for promoting and fostering the values of tolerance, understanding, building peace and combatting extremism.

KAICIID Secretary General, Faisal bin Muaammar, welcomed His Holiness in his first ever visit to the Centre, describing his visit as enhancing the Coptic Orthodox Church’s rich tradition of dialogue, cultural encounters over 1,000 years, and drafting a number of contemporary interreligious and intercultural initiatives and dialogues.

Bin Muaammar stated that Pope Tawadros II’s many stances in support of the International Dialogue Centre, and his support of the its different activities and dialogue platforms, has enriched  the areas of collaboration between the Centre and the Coptic Orthodox Church. It also serves as an affirmation of the shared knowledge-based and methodological values of interreligious and intercultural dialogue, which help foster coexistence and build peace.

During his first visit to the Centre, following his recent visit to the Vatican and Italy, Pope Tawadros II was given an overview of the Centre’s work and dialogue initiatives by KAICIID Director General, Fahad Abu Alnasr. He also had the opportunity to meet KAICIID members of staff, who come from twenty-nine different nations, and of various faiths. KAICIID’s staff represent the values of interreligious and intercultural coexistence, based on understanding and respect for the other.

Pope Tawadros II’s expressed his appreciation for the Centre’s work in consolidating coexistence and peace-building in the Arab Region, in particular through the Interreligious Platform for Muslim and Christian religious leaders in the Arab Region. The Platform was launched in Vienna, in February 2018. Through its efforts and the achievements, the Center has made remarkable strides in advocating for global dialogue over the last few years, over several continents. In his view, the Center has become a global, cultural platform for interreligious and intercultural dialogue, and expressed his continued support for its mission and work.

His Holiness is also a supporter of the Network of Religious Faculties and Institutes in the Arab World; the first network of its kind that was launched in May 2017, with the support of KAICIID in the Arab region to coordinate the efforts of member institutions in promoting a culture of dialogue through higher religious education.

The first Regional Dialogue Platform for Religious Leaders and Institutions for the Arab Region is the first, transnational, Christian-Muslim platform to advocate for protecting and preserving the rights of all religious communities in the Arab world. Senior religious leaders from across the Arab region are actively supporting this platform in order to speak up in one voice for common citizenship rights and an end to prejudice, exclusion, hate speech and violence. The umbrella platform teams up high level Muslim and Christian religious leaders to address the toughest challenges their communities face.

At present, 23 institutions are part of the platform. This number is expected to increase.