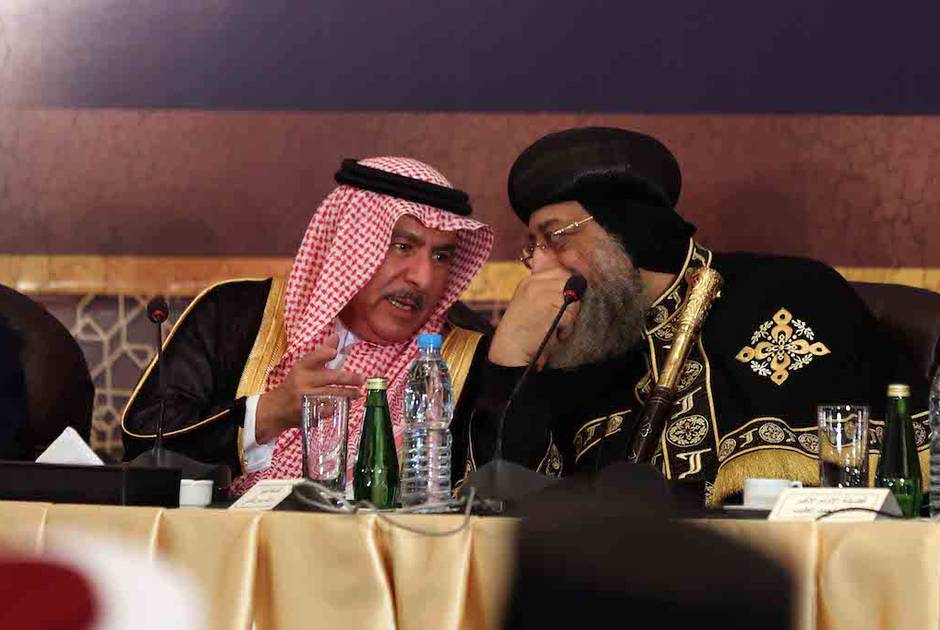 Vienna, 8 December 2014 - During the Conference on Countering Extremism and Terrorism, organized by Al-Azhar Al-Sharif in Cairo, Egypt, on 4 December 2014, the Coptic Pope Tawadros II, the Pope of Alexandria and Patriarch of the See of St. Mark, and KAICIID Secretary General Faisal Bin Muaammar met and discussed closer cooperation between the See of St. Mark and the Dialogue Center.

During their meeting, Pope Tawadros expressed his appreciation for the important role played by the Custodian of the Two Holy Mosques, King Abdullah Bin Abdulaziz, in laying solid foundations for an international organization, the KAICIID Dialogue Centre, which pursues interreligious and intercultural dialogue. He commended KAICIID for promoting dialogue between cultures and religions to support cooperation, understanding, coexistence and peace. He also expressed his aspiration to see cooperation between the See of St. Mark and the Center to achieve the KAICIID's mission of enhancing dialogue based upon common human values, coexistence and mutual cooperation to prevent and resolve conflict.

The Secretary General expressed to Pope Tawadros his appreciation for the wise and moderate stance of the See of St. Mark and its manifest keenness to avert conflict and thus preserve the historically peaceful relationship between Muslims and Christians in the Middle East.

An effective partnership engaging the Dialogue Center, the See of St. Mark and Egyptian churches as a whole is also one of the Secretary General’s expressed goals for the near future. He noted that KAICIID initiatives aimed at fostering meaningful dialogue to preserve plurality, religious and cultural diversity, as well as common citizenship among all denominations will be pursued in the Middle East region in a common effort to strengthen social cohesion and contribute towards peace.

The international conference on countering extremism and terrorism gathered over 600 Muslim and Christian clerics and was co-inaugurated by the Grand Imam of Al-Azhar, Sheikh Ahmed El-Tayeb, and Pope Tawadros.

20 Nov, 2015
“Religion is not imaginable without responsibility”: Cardinal Schönborn at KAICIID
END_OF_DOCUMENT_TOKEN_TO_BE_REPLACED