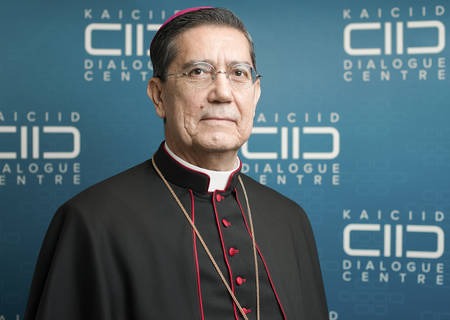 His Excellency Faisal bin Abdulrahman bin Muaammar, Secretary General of the International Dialogue Centre (KAICIID), has congratulated His Excellency Bishop Miguel Ayuso, a KAICIID board member, on his appointment as President of the Pontifical Council for Interreligious Dialogue.

Bishop Ayuso, who is also Titular Bishop of Luperciana, had served since 2012 as Secretary to the Council.  He is a published authority on Muslim-Christian relations and has taught in Cairo as well as Rome.  He also has widespread grassroots pastoral experience as a priest in Sudan and Egypt.

Bishop Ayuso has been a member of KAICIID’s multireligious Board of Directors since the Centre’s establishment in 2012. He also represents the Holy See on the Centre’s Council of Parties.

“We are delighted and honoured that Bishop Ayuso has been nominated by His Holiness Pope Francis to succeed the late Cardinal Jean-Louis Tauran as President of the Council,” Mr bin Muaammar said.

“As an invaluable KAICIID Board Member, Bishop Ayuso has been instrumental in formulating and evolving our mission to promote interreligious dialogue.  His appointment to the Council Presidency will further cement our ongoing fruitful relationship with the Holy See, a KAICIID founding observer and member of its Council of Parties.”

Bishop Ayuso succeeds the late Cardinal Jean-Louis Tauran as President.  With the late Cardinal, he played a key role in the historic visit last year by a high level delegation from the Holy See to Saudi Arabia, one of KAICIID’s founding member states.  The Cardinal was received by King Salman bin Abdulaziz, Custodian of the Two Holy Mosques.

As Secretary to the Pontifical Council for Interreligious Dialogue, Bishop Ayuso played a leading role in fostering relations with Grand Imam Ahmed al Tayeb of Cairo’s al Azhar Mosque.  This culminated earlier this year in the joint Declaration on Human Fraternity with Pope Francis on the universal “sacrosanct right to citizenship” for all humanity - hailed by observers as a key benchmark in Catholic-Muslim understanding.

Bishop Ayuso served as President of the Pontifical Institute for Arabic and Islamic Studies and has taught courses in interreligious dialogue and participated in meetings and conferences in Australia and countries across Africa, Asia, and Europe.  In addition to his native Spanish, Bishop Ayuso speaks Arabic, English, French and Italian.