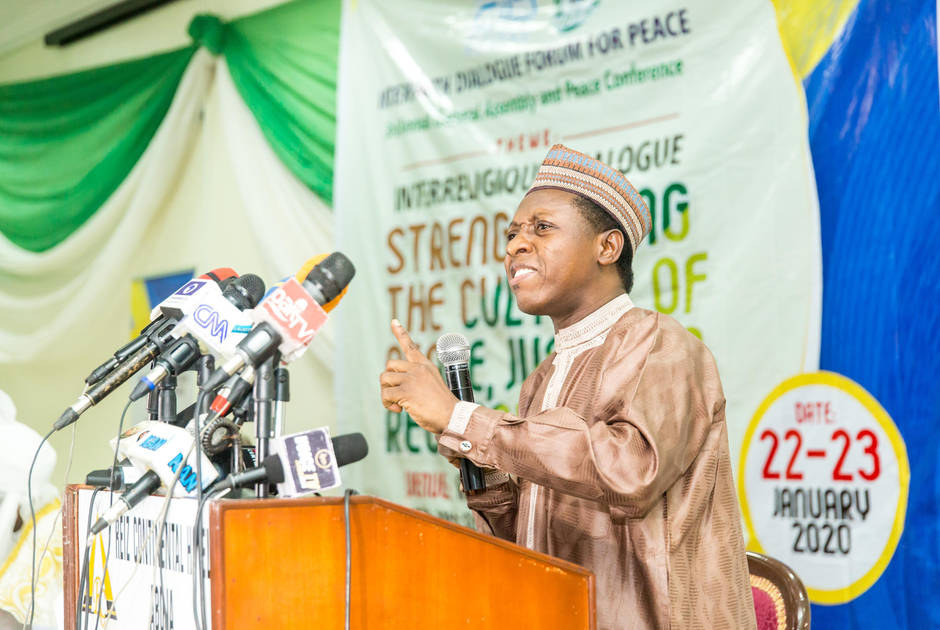 Participants at a peace conference, hosted in Nigeria by the KAICIID-supported Interfaith Dialogue Forum for Peace (IDFP), called for better engagement between religious leaders and policymakers, education reforms and improvements to security structures in order to prevent future acts of violence.

Held in Abuja, Nigeria from January 22-23 in conjunction with the IDFP’s general assembly meeting, the conference titled, “Interreligious Dialogue: Strengthening the Culture of Peace, Justice and Reconciliation", welcomed over 150 religious leaders, academics, diplomats and policymakers to deliberate the current state of security, as well as develop joint solutions to foster peace.

The conference was particularly timely, as it came on the heels of the death of Reverend Lawan Andimi, Chairman of the Christian Association of Nigeria’s chapter in the Michika Local Government Area of Adamawa State, who was reportedly murdered earlier this week by members of the extremist group Boko Haram.

Speaking at the peace conference, Alvaro Albacete, KAICIID’s Deputy Secretary General, outlined the need for strong partnerships and clear solutions to address extremism and incitement to violence. “During my first stay in this beautiful country, I could witness the challenges local communities faced and their willingness to work towards a change. I am enthusiastic to be part of today’s conference, which will provide a space for all of you to critically assess the interfaith sphere of Nigeria and identify the issues that require our attention in the years to come”, he said.

Participants at the conference deliberated extensively on the need to strengthen the culture of peace, justice and reconciliation in the country. Resulting recommendations included peace campaigns to be rolled out nationally across radio and television channels, an increase in university and school courses which teach religious tolerance, training for teachers on interfaith relationships and improvements to peace mechanisms and existing security structures in order to better protect Nigerian citizens.

Participants also agreed that better synergies between religious leaders and policymakers are desperately needed – particularly in security structures such as Early Warning and Early Response systems. KAICIID’s Nigeria programme has been actively working to involve religious leaders in these systems and to train them on warning signs of violence.

“I am very pleased to see what interreligious dialogue and cooperation between religious and community leaders can achieve when facilitated and supported. The recent endeavours of IDFP to establish Early Warning mechanisms in a few regions instils hope that religious leaders can play a crucial role in prevention”, the Deputy Secretary General said.

He also acknowledged that the work of KAICIID or the IDFP would not be effective without the support and collaboration of the Nigerian government and local agencies.

“For us in KAICIID, Nigeria is not only a place where we implement projects, but an important partner,” the Deputy Secretary General said. “As the title of this meeting makes clear, we are committed to collaborating with you to support Nigerians in continuing their interreligious engagement towards peace, justice and true reconciliation.”