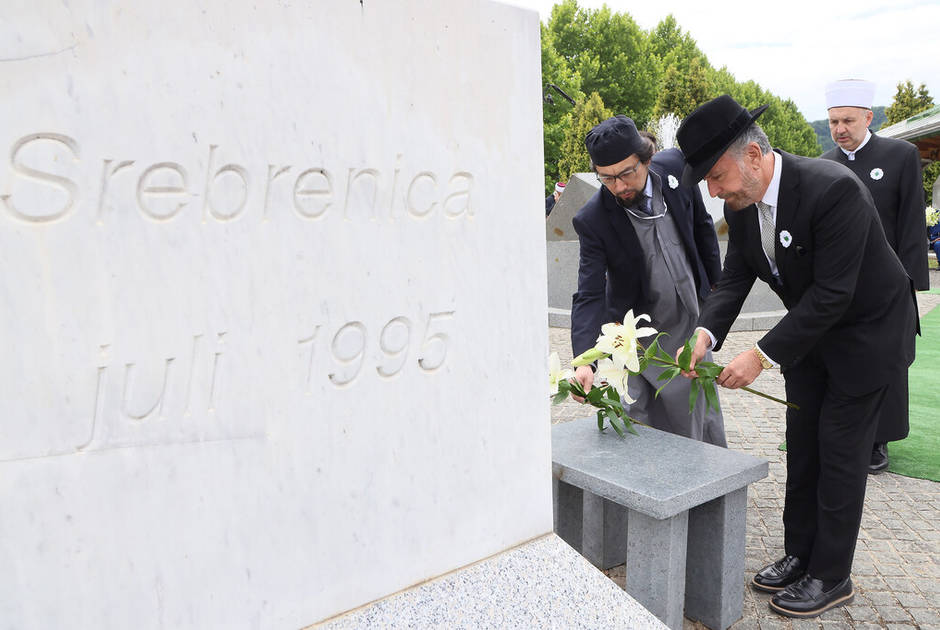 Senior Jewish and Muslim faith leaders gathered in Bosnia-Herzegovina on Monday to jointly commemorate the 27th anniversary of the Srebrenica massacre.

At a time of rising anti-Semitism and Islamophobia in Europe, the visit saw imams and rabbis from the KAICIID-supported Muslim Jewish Leadership Council Europe (MJLC) come together to send a powerful message of interfaith cooperation, coexistence, and unity.

“Showing solidarity with the pain of our Muslim sisters and brothers is showing our love and solidarity with them,” said Chief Rabbi David Rosen, honorary member of the MJLC and KAICIID Board member, who was present at the ceremony.

“I hope that such a Jewish-Muslim pilgrimage to a place of such terrible carnage and suffering of Muslims in particular, but humanity in general, will deepen positive Muslim-Jewish relations,” Rabbi Rosen added.

The annual Srebrenica commemoration ceremony remembers the killing of more than 8,000 Bosniak (Bosnian Muslim) men and boys in and around the town during the Bosnian War. The slaughter, which started on 11 July 1995 and lasted for more than ten days, was designated as a genocide by the International Court of Justice, and has been described by the United Nations as the worst crime on European soil since World War II.

Today, almost three decades on from the Srebrenica massacre, religious hatred remains an ever-present threat to peace and stability in Europe. Recent research suggests that hate crimes targeting Muslims have been intensifying on the continent in recent years, while anti-Semitic attacks against Europe’s Jewish communities are at a decade high.

With this new wave of religious intolerance, it’s more important than ever to remember and learn the lessons of past atrocities, senior faith leaders say.

“We live in the turning points of our age. We are witnessing the rise of xenophobia, Islamophobia, and anti-Semitism in the public discourse,” said Mufti Dr. Nedzad Grabus, Mufti of Sarajevo and Co-Chair of the MJLC.

“There are many indications which confirm that our societies are going through the different challenges and difficulties of accepting new realities. That's the reason why we need to acknowledge that populism leads to dehumanization of the other,” added Mufti Grabus, who led the visit to Srebrenica.

In addition to paying tribute to the victims of the massacre, the visit is helping raise awareness of the dangers of religious discrimination and hatred, which can escalate rapidly when left unchecked, as shown by the tragic events of Srebrenica.

This message is particularly important in Bosnia-Herzegovina, where ethnic tensions are again rising. In recent weeks, the United Nations has urged the country’s political leaders “to turn the page on rhetoric and policies of division” amid growing fears of renewed violence.

Established in 2016, the MJLC was set up with support from KAICIID as a means to counter prejudice, disinformation, and violence against people who practise the Jewish and Muslim faiths.

The initiative unites senior figures from Europe’s Muslim and Jewish communities to address rising religious intolerance, as well as advise on policy-making related to freedom of religion and belief.

In the past, the MJLC— which is equally composed of Jewish and Muslim members — has organised coalition building workshops and advocated for religious freedoms in the face of potential prohibitions, such as national bans on certain forms of ritual slaughter.

The MJLC has also strived to harness interfaith healing in the aftermath of religiously motivated attacks, paying tribute to the victims of the Halle synagogue shooting 2019, and sharing regret at the desecration of Muslim gravesites in Slovenia in 2021.

Europe’s Muslim and Jewish communities have both endured huge cruelty and trauma in the recent past. Condemnation of the circumstances which led to these atrocities is an important means for adherents of both faiths to preserve a sense of peace, security, and belonging.

“The MJLC recognizes that campaigning for the rights of minority communities is most powerful when religious groups stand up for each other” said Frances Rose, Programme Officer at KAICIID. “Muslim and Jewish representatives mourning together and condemning these atrocities not only strengthens the bond between the communities but it underlines that there are universal legal and moral standards in Europe that cannot be discarded. With war in Ukraine putting millions of people at risk, it represents a call for Europeans to be hypervigilant concerning the threat of hate crimes towards particular religious, ethnic or cultural groups and to take action if they occur.”

With this in mind, a delegation of MJLC board members travelled to Poland earlier this year to participate in the 2022 Holocaust Remembrance Day commemoration service at Auschwitz-Birkenau, the former Nazi concentration camp.

The trip, like the visit to Srebrenica, was part of MJLC’s joint commemoration of Muslim and Jewish tragedies, designed to send a clear signal of solidarity between the two faiths.

KAICIID’s Europe Region Programme — of which MJLC is a key component — aims to elevate interreligious dialogue and cooperation by bringing together faith leaders, educators, dialogue practitioners, policymakers, and other stakeholders.