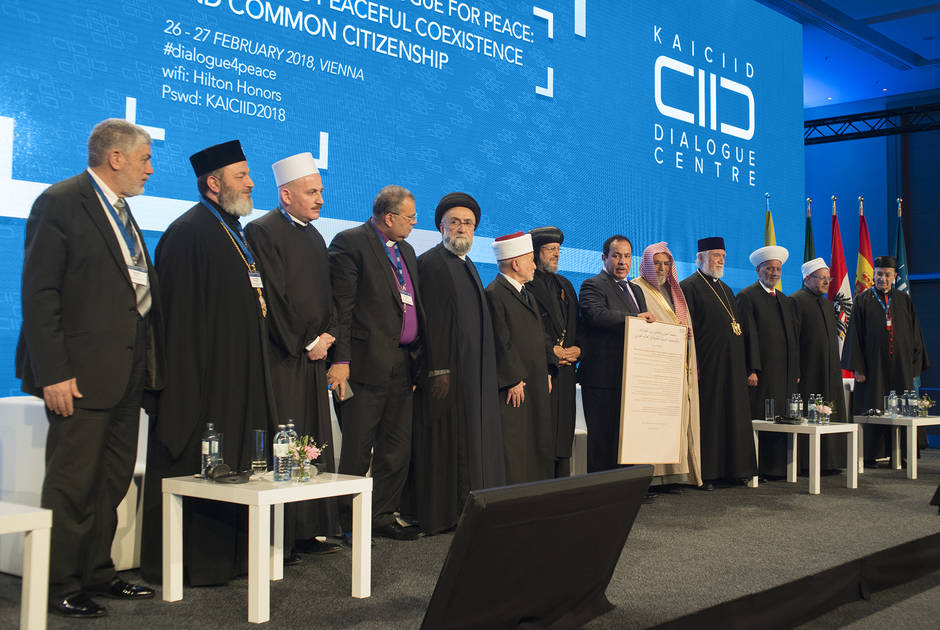 Vienna, 26 February 2018: Twenty-three of the highest religious authorities from Muslim and Christian institutions across the Arab region today committed to work together to rebuild and protect their communities from the effects of violent extremist rhetoric and actions.

In a historic initiative, they launched the first interreligious platform to advocate for the rights and inclusion of all communities in the Arab World, to combat ideologies exploiting anxiety, and instigating hatred, and sectarianism, and to jointly address the toughest challenges their communities face.

The dialogue platform is the pioneering initiative of the Vienna-based International Dialogue Centre (KAICIID), an intergovernmental organization founded by Saudi Arabia, Austria and Spain, with the Holy See as a founding Observer.

Speaking at the launch of the platform today, KAICIID Secretary General Faisal Bin Muaammar said: “Religion, especially in the Arab world, is a powerful motivating force, and a source of shared identity for millions of people. For too long, we have allowed religion to be hijacked and used as justification for causing pain and suffering. With the launch of this platform, the leaders of religious communities say “enough” to this manipulation and misuse. There has been enough talk, and not enough action. Through this platform, we will set a visible, tangible example of interreligious cooperation. People need to see that religious communities, working together, are much stronger than any extremists, and that cooperation brings concrete benefits to everyone.”

The members of the platform will, together, work to promote social cohesion and common citizenship in their communities. Some of the planned activities of the platform include training for clergy on how to empower young people to resist violent extremism, and the development of religious education curricula to promote respect for all religions. The Platform will also focus on constructively engaging with all forms of media in the region to deepen respect for diversity and a culture of dialogue. The members of the platform will also regularly meet with national and regional policymakers to advocate for policies and laws that uphold social cohesion.

Mar Béchara Boutros Cardinal Al-Rai, Maronite Patriarch of Antioch and All the East said: “Today, as we meet to launch this “Interreligious platform for Dialogue and cooperation in the Arab World”, we are faced with the awareness that the painful events that the Arab world has been going through for two decades have created a real threat to the diversity of the social fabric, as well as a real threat to peaceful coexistence and cohesion among the religious communities of the region.

We are determined to do what we can to safeguard our communities from war, extremism and violence, especially in the name of religion, and to plant values of dialogue, peaceful coexistence and common citizenship. We wish full success for this conference and to see the fruits of its efforts in the interreligious platform which will be launched here, hoping that it will put an end to violence in the name of God and religion, safeguard the holiness of the Lord and the dignity of religions and the holiness of their teachings.

Sheikh Dr. Shawki Allam, Grand Mufti of Egypt said: “The world is in dire need of dialogue platforms based on firmly established principles. We need a dialogue that respects our contexts and does not seek to stir animosity, hatred or impose hegemony over one another.

As the head of a great religious institution, Egypt’s Dar al-Ifta, it gives me great pleasure to take part in this event.

It gives me great pleasure to meet with you in this blessed gathering held under the umbrella of KAICIID to launch this platform of enormous importance and great moral and ethical values. It is an event intended to provide a platform for regional dialogue for religious leaders and institutions across the Arab and wider world to promote peaceful coexistence and common citizenship.”