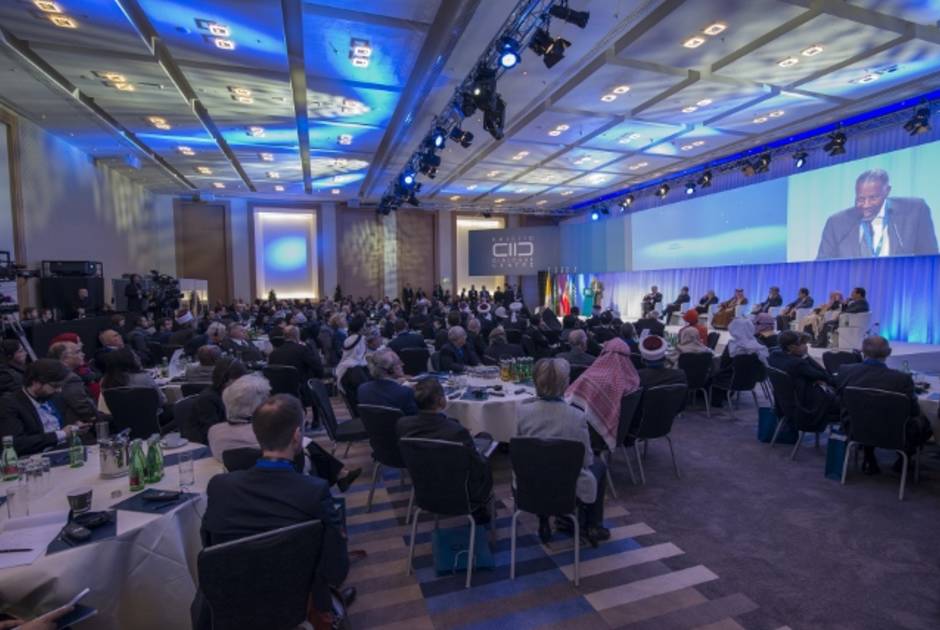 VIENNA, 19 NOVEMBER: In an unprecedented demonstration of multi-religious solidarity, leaders of Christian, Muslim and other religious communities from Iraq, Syria and the larger Middle East region today have denounced with one voice all violence in the name of religion, and have called on the international community to protect religious and cultural diversity in Iraq and Syria.

Religious leaders from Sunni, Shiite, Christian, Mandean, and Yazidi communities across the Middle East today jointly issued the Vienna Declaration, “United against Violence in the Name of Religion”, at the international conference organized by the KAICIID Dialogue Centre.

This is the first time religious leaders representing so many different religions from a crisis region have come together as one to denounce oppression, marginalization, persecution and killing of people in the name of religion.

Speaking on behalf of the religious leaders gathered in Vienna, a representative said:

“We have gathered today as religious authorities from the Arab countries and the world, in the presence of high level governmental, intergovernmental, and civil society officials to raise a joint plea to the powerful and almighty God to strengthen us to shoulder our responsibility at this moment in history. In the shadow of these difficult circumstances, we remain sincere in our convictions, true to our religious teachings and mindful of our humanitarian values.”

“We gather together to listen to each other, and to think together about possibilities for cooperation to transform the crisis. It is through dialogue and the strengthening of our mutual values of citizenship, that the windows of hope and aspiration will be opened. We must tear down the barriers of fear, holding grudges and injustice, which divide people and eliminate their dreams and hopes of peace.”

The religious leaders were united in acknowledging that the current conflict in Iraq and Syria targets followers of every religion. They jointly rejected all violence in the name of religion, and attempts by groups like ISIS to claim legitimacy for their actions within the teachings of Islam. They also condemned the serious violation of human rights in Iraq and Syria; especially against Christian, Yazidi and other religious and ethnic groups.

The religious leaders emphasized the right of all to be treated with dignity and humanity regardless of their religious tradition. Atrocities committed in the name of religion are crimes against humanity, and crimes against religion. The declaration also rejects and denounces the support or sponsorship of terrorism.

Together the religious leaders expressed their collective solidarity with all who are oppressed due to these events, especially those who have been uprooted and displaced from their homes. They called upon relevant political powers and the international community to spare no effort to help these people return to their homes.

Speaking after the meeting, Faisal Bin Muaammar, KAICIID Secretary General, the international organizer of the conference said, “The manipulation of religion in Iraq and Syria has horrific human consequences. Today we witnessed a reason for hope: the conviction and resolve of religious leaders from many different faiths, speaking with one voice, to say that ISIS and other extremist groups do not act in the name of religion”.

“The KAICIID Dialogue Centre is privileged to have brought these religious leaders together, and is committed to work with them, and with our partners in the international community, to help build peace for the people who suffer in this crisis, and to ensure that the world hears this call for action.”

The participants at the KAICIID Conference “United against Violence in the Name of Religion” also recommended initiatives to promote social cohesion and peacebuilding in the region. The initiatives’ implementation will be overseen by a permanent interreligious committee and working groups from various dialogue and interreligious institutions.

The Conference Declaration was endorsed by the religious leaders participating at the KAICIID Conference “United against Violence in the Name of Religion”.

Also present at the event were high level representatives from the Armenian Orthodox Church; the Council of Senior Scholars from Saudi Arabia; the Mouwahiddoun Druze Community in Lebanon; the Yazidi Community and Religious Council; the Evangelical Community of Lebanon; the Iraqi Muslim Association; the Maronite Patriarchate of Antioch and all the East, Alexandria and Jerusalem; the Mandaean Community in Iraq; the Melkite Greek Catholic Church, the Middle East Council of Churches, the Protestant Community of Egypt, and among many others.

Among the organizations represented at the International Conference were: the Office of the UN’s Special Adviser on the Prevention of Genocide UN Genocide Prevention, UNDP Iraq, UNDPA, European Commission, the Pontifical Council for Interreligious Dialogue, Adyan Foundation, Arab Group for Muslim-Christian Dialogue, the Iraqi Interfaith Council, Forum for Promoting Peace in Muslim Societies, and the Iraqi Institute for Human Rights, Khoei Foundation.

In Memory of the Late Sayyed Hani Fahs and Dr. Mahmoud Azab

Two of KAICIID’s esteemed friends passed away in 2014; this video compilation was made in their memory from interviews filmed of them during their participation in a KAICIID Consultation Meeting on Common Citizenship in the Arab Region in June 2014. Their unwavering faith in dialogue to promote peace is an inspiration to everyone who believes in the impact of dialogue.

United Against Violence in the Name of Religion: Supporting Religious and Cultural Diversity in Iraq and Syria

On behalf of KAICIID, Mr. Thomas Busch and Mrs. Sabine Kueper visited various parts of Northern Iraq and Turkey in October 2014; the resulting documentary illustrates the human impact of the crisis currently ongoing in Iraq and Syria due to the manipulation of religion to justify violence. KAICIID calls for dialogue among religious leaders to unite against violence in the name of religion to support religious and cultural diversity in Iraq and Syria.

5 March 2021
Interreligious Platform in Arab Region Welcomes Pope To Iraq
22 September 2017
KAICIID Secretary General Welcomes Meeting Between Pope Francis and Dr. Al-Issa, Leader of the Muslim World League
18 August 2017
Those Who Commit Violence in the Name of Religion Act “Not from Faith, but from Hate”
26 July 2016
Religious Leaders on KAICIID Board Repulsed by Attacks in France, Germany, Call for Dialogue to Dispel Fear
END_OF_DOCUMENT_TOKEN_TO_BE_REPLACED