Miriam Díez-Bosch: "We do not just talk about refugees, we talk about the work we do with them" 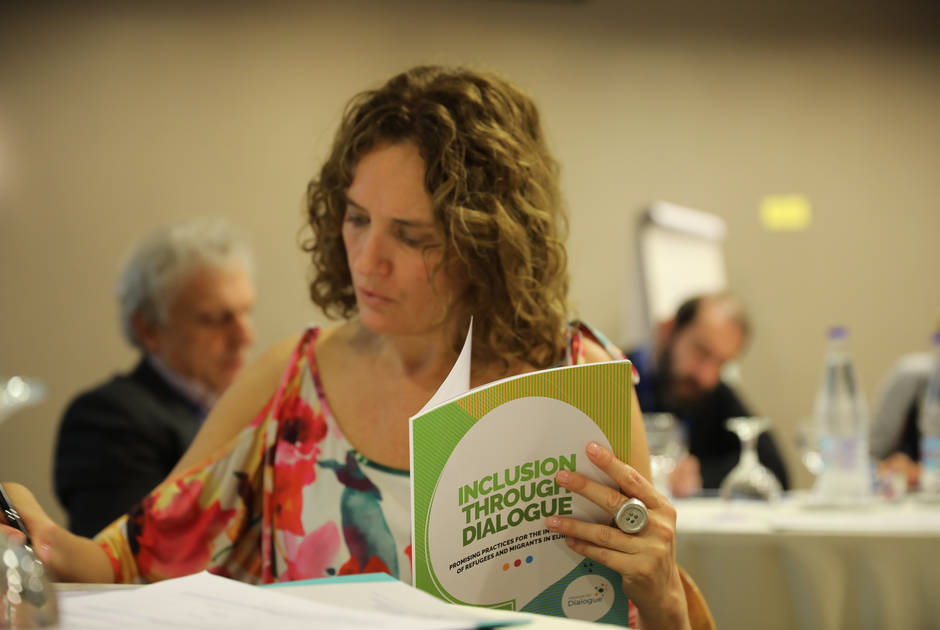 A Spanish journalist specialized in the field of religion, Miriam Diez-Bosch is a Professor at the University Ramon Llull in Barcelona and a member of KAICIID’s “Network for Dialogue”. She is also Acting Director of the Blanquerna Observatory on Media, Religion and Culture, a research centre that focuses on intercultural and interreligious dialogue, as well as Islamophobia within the Raval district in Barcelona.

Her awareness-raising campaign #BeTheKey was created to empower citizens to tackle the issue of Islamophobia, showing that everyone, especially young people, can become a “key for change”, and overcome prejudice, as well as improve mutual understanding of “the Other”.

On the sidelines of the 1st European Policy Dialogue Forum on Refugees and Migrants in Athens, Miriam spoke with us about the challenges and success of her campaign in Barcelona, the importance of the policy forum and about the work of KAICIID.

Can you tell us briefly what your campaign is all about and why it is important?

We run a campaign against Islamophobia online. The campaign is called “Be the Key” – be the key against Islamophobia. It is a campaign that is run by university students which seeks to raise awareness for how the hate speech discourse is spread online, and how it can be stopped by “being the key”. The campaign asks people how and why they are the key to fight Islamophobia, but also to fight all other kinds of hatred that is spread online. Basically, it’s an online campaign that is rolled out through Instagram, Twitter and Facebook.

Why is Raval in Barcelona a special neighbourhood and why was your campaign implemented there and not elsewhere in the city?

Our campaign is a local campaign based in the Raval district of Barcelona, which is the most multicultural place in Barcelona. Barcelona is a great city, but it has also suffered a terrorist attack, which was carried out in Raval a few years ago. Our Centre – the Blanquerna Observatory on Media and Religion – is located in that neighbourhood. In Raval alone, we have 13 different religions, so you can imagine that it is a vibrant and cultural place.

What have been the greatest obstacles that you have been facing with your campaign?

One of the main obstacles you face when you have an online campaign against Islamophobia is the issue of language. We work in English, Catalan, and Spanish, but our target group speaks Arabic and other languages. So languages are an obstacle, as is convincing the local community in Raval to go online and to express why they could be the change, using their image. So sometimes they are reluctant to do so.

In what ways has the campaign been successful and how?

In our campaign we have asked for interaction. So one clear indicator of the success that we have had is the fact that interaction has been very high. People interact with us through comments they post, through photos they send, pictures of keys, etc. So we have organized an exhibition on “Be the Key”. And the campaign has also been successful in terms of its expansion. The “Be the Key” campaign has been presented in different places all over the world, and it has been covered by the media as well. So we have seen the success through the good feedback that we have received as well.

Do you think that this campaign could serve as a role model for other cities? Could it be implemented in different cities as well?

Yes, we think that our campaign could be replicated and could serve as a role model. And this is why we are so willing to engage with other communities, to explain how such a campaign can be organized. It is not only about explaining why you are the key against islamophobia, we have also organized activities online and offline, such as a Wikipedia training, explaining how we can change a Wikipedia entry that is islamophobic. With activists from Wikipedia, we have also organized gender islamophobia trainings, and we think that we could export that to other places and cities.

Why do you think this policy forum is important and why did you decided to attend?

I think the Policy Forum is important just for the mere sake that it is taking place. It is a platform that brings together people who are really concerned about the issue, and who are aware that this topic should be discussed locally, nationally and globally. And for me, it has been very important to know how people engage with host communities and with refugees. Here, we are not only talking about refugees themselves, but we are especially talking about the work we are doing, which I believe makes this event successful.

How important do you consider the work of an organization like KAICIID in this regard?

I think organizations like KAICIID, which foster dialogue and mutual understanding, are much-needed in this world. They offer a platform for people and entities to engage and to meet. So every entity, every organization that fosters dialogue and that brings people together for a better world is most welcome. And in addition to that, I believe that KAICIID is an organization that works very professionally and in a very pluralistic way. To me, for example, the work of KAICIID is particularly interesting due to its pluralistic, intergenerational, interconvictional and geographically diverse approach.