Metropolitan Emmanuel Speaks at the 30th Anniversary of the Mt. Hiei Religious Summit 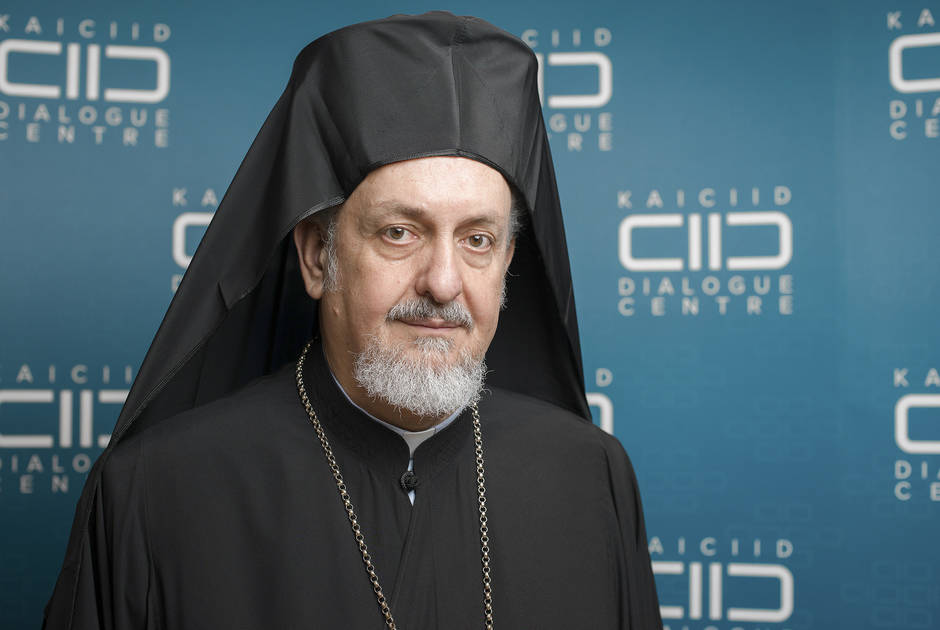 Terrorism and Religion – How can people in faith accept and work to combat violent radicalism?

On behalf of the Ecumenical Patriarchate and of the KAICIID Dialogue Center, I would like to congratulate you on the occasion of this crucial initiative that brings us together. I am particularly honored by your invitation to reflect on terrorism and religion today at a time when these two words are too often understood and used as synonyms.

Religious extremism. In my opinion, based on the reality of religious violence in today’s world, we should keep reflecting on the religion-violence nexus. Fanatics and terrorists despise wisdom and God’s commandments. They may claim to believe in God, but they do not know wisdom nor live a virtuous life. Consequently, they do not truly believe in God. As we have often said: a crime in the name of religion is a crime against religion. In a recent address during the International Conference on Peace, at Al-Azhar University, in April 2017, His All-Holiness Ecumenical Patriarch Bartholomew said with audacity: “Islam does not equal terrorism, because terrorism is a stranger to any religion. This is why interreligious dialogue can chase away fear and suspicion. It is central for peace, but only in a spirit of mutual confidence and respect.” The words of the Ecumenical Patriarch echoed what the Encyclical of the Holy and Great Council of the Orthodox Church convened in Crete, in June 2016, said: “Honest interfaith dialogue contributes to the development of mutual trust and to the promotion of peace and reconciliation. The Church strives to make ‘the peace from on high’ more tangibly felt on earth. True peace is not achieved by force of arms, but only through love that ‘does not seek its own’ (1 Cor 13.5). The oil of faith must be used to soothe and heal the wounds of others, not to rekindle new fires of hatred.” (par.17)

Religion cannot justify violence. Hate speech using religious rhetoric is not only an offense against people; it is also an offense against religion. The cynical use of religion by extremists seeks to create artificial limits on the universal message of peace and love to which we should bear witness. In these conditions, the fundamental right to freedom of religion has progressively been denied. And yet freedom of religion, especially for minorities, is grounded in the dignity of mankind.

Religions and the protection of human dignity. Today, the issue of the protection of human dignity is closely related to religious pluralism as challenged by the current migrant crisis. Religions have a key role to play here. Considering how religions can promote social inclusion and justice highlights the commitment that we should pursue. As I said, in my opinion, based on my modest experience, I believe that religious actors and faith-based organizations can foster better inclusion of migrants. I will give you three examples. First example: when a new migrant arrives, he does not necessarily speak the local language. Faith-based organizations can help him navigate in his new context, directing him to language courses, or even offering language courses. Second : faith-based organizations can also help to contact other local associations. I would like to emphasize the role of mediation that religion can play. This is why it is essential that religious communities promote what Antonio Gramsci calls “organic intellectuals,” meaning people who are able to build bridges between their religious community and the surrounding society. Third: Faith-based organizations can help to show that the migrant’s culture of origin and the receiving society are compatible. This is where I see the importance of interreligious dialogue as a means to respond to biases and prejudices and to promote peace through social inclusion. That will require a willingness to meet, to speak and to interact. Interfaith dialogue, in its different expressions, should contribute to a better understanding of the other, by rehumanizing the other and thus promoting human dignity and security. Our answer should be comprehensive and global. To appreciate this, we should remember the powerful parable of the Last Judgment in Matthew 25, where we hear Jesus Christ’s stark words: “I was hungry and you gave me food; I was thirsty and you gave me something to drink.”

Religions and the protection of the environment. It is impossible to speak about religion and the protection of the environment without sharing a common understanding of human dignity. As witnesses of a world in crisis, we need to rediscover the meaning of faith. Some blame globalization. But behind this phenomenon, humankind should face its own responsibilities, as interrelated people, or as I would say, as people bonded by a relationship with the whole creation. If we value each individual made in the image of God, and if we value every particle of God’s creation, then we must also care for each other and for our world. The ecological problem of pollution is invariably connected to the social problem of poverty; and so all ecological activity is ultimately measured and properly judged by its impact and effect upon other people, and especially the poor. The environmental issue is closely related to our topic today. In fact, climate change will in a near future, if it is not already the case today, impact more and more migration flows related to geopolitical conflicts. In order to meet the challenge of sustainable development, we must also take on a spiritual challenge: that of converting lifestyles. The spirit of conversion, in Christian spirituality, calls for an in-depth mutation, for a conversion of the being that touches and exceeds at the same time both value and environmental issues. Love for one’s neighbor - present and future - takes over selfishness. The collective action of believers will apply pressure on world leaders and global decision makers. Sobriety will respond to the appetites of over-consumerism. Sharing limits inequality. Finally, charity encompasses the political and the social sphere. Through prayer and commitment, we can be led to a new life, to the possibility of a sustainable, just and peaceful society. Again, the Encyclical of the Holy and Great Council can help our reflection today: “The roots of the ecological crisis are spiritual and ethical, inhering within the heart of each man. This crisis has become more acute in recent centuries on account of the various divisions provoked by human passions – such as greed, avarice, egotism and the insatiable desire for more – and by their consequences for the planet, as with climate change, which now threatens to a large extent the natural environment, our common home”. (par.14)

Real and substantial dialogue is an essential condition for avoiding fundamentalism and religious violence. It should be applied everywhere, using all possible means of communication. Dialogue among the members of different religions should not be synonymous to submission. Real dialogue does not mean submitting to the will or opinions of others or to lose your identity. We must seek to remind the world that the use of dialogue, as a means of exchanging ideas or opinions on particular issues, working toward an agreement as equals, which results toward an action or solution, is the ideal form of communication in our contemporary multicultural society. How can we learn about each other if we do not communicate? We should keep in mind that dialogue is more unbiased than debate, more honest than polite conversation, and more agreeable than discussion. Because, as Saint John the Theologian writes in his Gospel: “In the beginning was the word.” (Jn1,1), the Logos. It is a continuous way of thinking and reflecting together in order to develop a shared understanding in relationship between people seeking an even balance between advocacy and inquiry. It honors all parties involved, suspends assumptions, observes the observer, listens to its own listening, is aware of thought, seeks collective intelligence, develops a shared understanding, and embraces possibility. It is a process that takes time, dedication and honesty.

As we should constantly repeat, as religious leaders, we have the mission, through our intensive cooperation, to promote at a national and international level human dignity, which we consider as being the very image of God and to oppose fear by reaffirming the bond of love that makes humankind one family under God’s care.