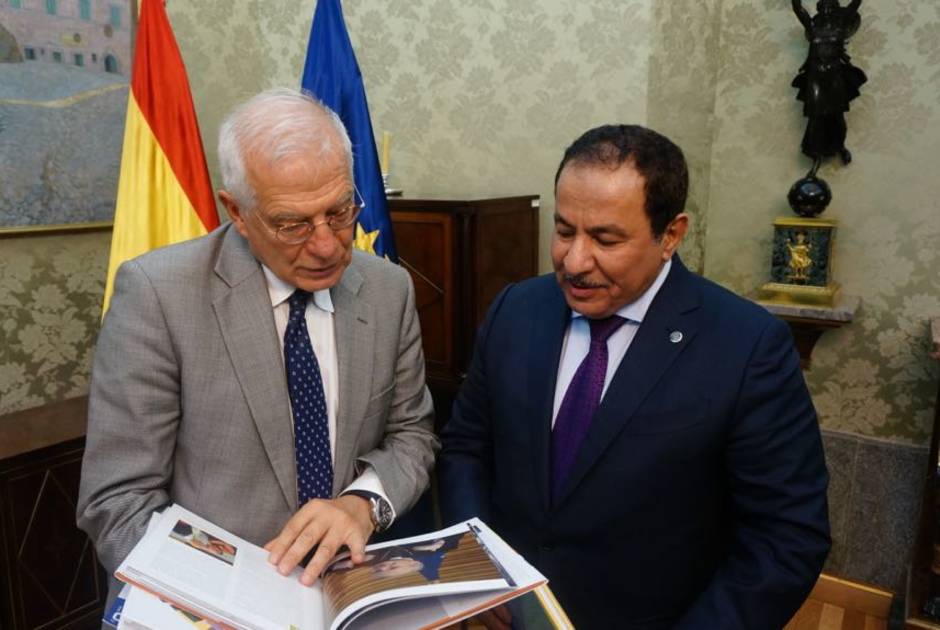 Mr. Bin Muaammar and Mr. Borrell discussed the work of the International Dialogue Centre using interreligious dialogue as a methodology to prevent and transform conflict and build peaceful coexistence.

In this regard, the Secretary General briefed Minister Borrell on the partnerships between KAICIID and various multilateral organizations, including the United Nations. KAICIID works with these organizations to support and promote the involvement of religious leaders and communities in sustainable development and policymaking. Most recently, KAICIID and the Inter-Agency Task Force on Religion and Development organized a side event at the United Nations General Assembly, with the aim of highlighting to policymakers the unique achievements of women of faith in building sustainable peace.

The Secretary General also informed the Minister of KAICIID’s leading role at the G20 Interfaith Summit, which presents policy recommendations grounded in interreligious learning to the annual G20 Summit.

Spain is at the forefront of supporting interreligious dialogue as a tool for the prevention, mediation and resolution of conflicts, and of highlighting the need to move from a reactive culture to a preventive one.

Through its leadership of the Barcelona process, and its support of institutions dedicated to the furtherance of interreligious dialogue such as KAICIID, Spain is a leader in embedding dialogue at the institutional level in policymaking.

Minister Borrell welcomed the briefing on KAICIID’s activities, and re-emphasized his government’s commitment to the Centre. He also welcomed increased cooperation between the government of Spain and KAICIID on programmatic areas to promote interreligious dialogue.