Mabrouka Rayachi: "When dialogue digs deeper, it can contribute to integration" 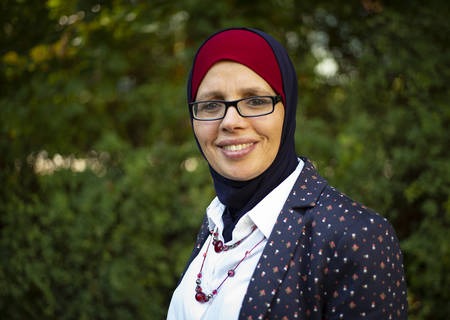 From your experience, how do you think religion can affect integration processes?

It depends on how you conceive religion. I see different cases from my work in schools with different parents. My sense is that we don’t have one understanding of Islam, for example, and therefore it depends on how one perceives it. If parents are very conservative, they may feel like they have to protect themselves and their children from the influence of the majority society, which can result in them seeing integration as a risk, and in turn we often see these parents preventing children from taking part in activities such as swimming classes or excursions. Anything apart from learning is often considered as a danger for the children by their conservative parents. On the other hand, if the parents’ perception of religion is on the other side of the spectrum, in that they view religion as a set of values that exist to help people find their way in life, what I often notice in this case is that such parents support and promote the integration process. It’s very important to differentiate this point because religion itself is something abstract. What we make from our perception of religion is what we will manifest in reality.

From your experience, how can interreligious dialogue contribute to integration?

Dialogue in general is very important nowadays because otherwise we live together but apart. Dialogue brings us together to know more about others, to understand others and to get rid of our fear of the Other. Interreligious dialogue is a bit more special because it’s about people coming together in the spirit of common values in order try to understand each other’s perspectives and to work with each other’s differences in a constructive manner that promotes coexistence and mutual respect. There is something special in this dialogue, and when it works well, surely it will help integration.

Interreligious Dialogue has to be authentic; it has to dig deeper than the surface and it should be accompanied with critical thinking to make it a real dialogue. Otherwise it risks to be superficial, therefore it would not reap any real results and it would not be sustainable. When dialogue digs deeper, the quality is higher and it can contribute to integration.

I remember that in 2015, when the flow of immigrants was so huge, religious teachers made a tremendous effort to confront this challenge. Many refugees came without any idea of how schools in Austria function, and headmasters and teachers alike, had no idea how to manage this new challenge. Religious teachers (Catholic, Protestant, Muslim, Alawit…) dealt with this situation and tried to turn a challenge into an opportunity. They worked with Caritas and tried to identify the needs. As an example: it was winter when they organised an interreligious project called “Warm Feet for All” and they collected over 450 pairs of socks. It was very touching.

At the beginning, people were moved by compassion, but then when problems emerged, the mood was not as good as it was at first. Again, religious teachers from different religions came together with their students and addressed this issue. Refugees needed to learn that every school has rules and a way of functioning, and others needed to learn that newcomers need time to be integrated; it’s not easy for them. It was a very good opportunity for religious teachers to support the school. Their efforts were very appreciated by headmasters and fellow teachers because they contributed to a peaceful environment at school and they contributed to integration.

And after that first wage of migration, how are the current, ongoing interreligious dialogue efforts coming from the teachers?

So, do you often mediate between parents and schools?

Yes. Sometimes I have success, sometimes not, but I try my best to help these children, especially the girls. It’s not only interreligious dialogue. It’s intrareligious and intercultural. I don’t think you can separate them.

We live in a time of increasing polarisation, and this makes our work difficult. I feel that even friends which I have known for a long time are now asking me strange things, because they have been affected by the political environment. The political and social environment affects dialogue. For me, it’s very important to keep the school as a safe place for these children.

Integration, in my opinion, takes place mainlytake place at school becausechildren are still children, they don’t have prejudices, and they are more likely to accept differences. What I see is that children are curious to know about the others; they ask questions just because they want to know. That’s why we have to make sure that schools serve as a safe place for dialogue and integration.

We have the right environment, the time and the place, but integration is not a one way street, it’s not only through the efforts of religious teachers… every teacher can contribute.

Based on your experience coming from Tunisia to Austria and going through the integration process, how do you see yourself today? How do you perceive integration?

I am very well integrated in the Ministry of Education in Lower Austria and this is very important for my work because if I am integrated, I am open and engage people in dialogue with me. Dialogue has to do also with courage, if I am afraid then I can’t initiate or engage myself in dialogue. I have to be authentic and to be critical, and I have to accept criticism too. I’ve had much success in Lower Austria. My colleagues in Vienna are surprised, because the headmasters refer to me whenever there is an integration challenge in their schools.

In general, for dialogue we have to propagate the positive stories. Because unfortunately we refer to the bad stories most of the time. We as religious people and dialogue advocates have to share these positive stories because they are the balance to other stories, they give hope to continue dialogue. It’s the same for integration. Every time we speak about it, it is considered so negatively. Integration is not only problems of headscarf, Ramadan, swimming, etc. I would like to use the word inclusion instead of integration because then all students come together in the same pot. Integration is very misused and misunderstood. We have to be careful. We put the focus on one group that has to be integrated and we neglect other groups in Austria. I believe that this is the general problem in Europe.

My motto in life is ‘surely I can’t change the world, but I can fix a part of it’. This motivates me to do more and more.

From your experience, does the integration process affect the perception of religion?

Religiosity is something changeable and not fixed. I begin to laugh when I remember how I perceived my religion 20 years ago, it was very different from today.

At the beginning, refugees may view their religion as the only thing that gives them security, in that it defines who they are. It becomes an identity issue. Perception of religion can change, but this does not happen from one day to another and cannot be imposed. It’s a self-transformation process and it takes time.

Also, we have to contextualise religion. Otherwise, it has no meaning. The same religion can be interpreted differently in different countries. There are of course core values, which don ´t change, but others have to be adapted and contextualised. And this allows us to understand our children better, because if we impose on them religious views from another context or time, they will not be able to cope with it. The two options they would have are either extremism or leaving the religion all together, and neither of these options is good. We have to contextualise religion and see it with the eyes of the 21st century.