From Launch in Vienna, Austria, Interreligious Platform for Dialogue and Cooperation Moves to Implementation in the Arab Region with Focus on Religious Education

Amman, Jordan and Cairo, Egypt, 1 May 2018: The “Interreligious Platform for Dialogue and Cooperation in the Arab Region”, a multi-religious platform for the highest leaders of Muslim and Christian religious institutions in the Middle East this week began an ambitious series of cooperative projects across the Arab Region. The platform, which is the first of its kind in the Arab region, was launched through consultations with the Vienna-based intergovernmental organization, the International Dialogue Centre (KAICIID), and was launched at a conference in Vienna, Austria in February 2018.

The steering committee of the Platform, which consists of 23 leading representatives of religious institutions from Egypt, Lebanon, Saudi Arabia, Palestine, Tunisia, Jordan, and Morocco, held its first meeting in Amman, Jordan this week.

Following the productive meetings the Director General of KAICIID, and the head of the KAICIID delegation to Jordan and Egypt, Fahad Abualnasr expressed his gratitude to the members of the platform for their commitment to interreligious dialogue. “When we launched the platform in Vienna earlier this year, we made a promise to the people of the Arab region, to build cooperation between Christians and Muslims for the good of all. This promise would only be words without the commitment of the religious leaders of the platform. As we have seen over the past few days in Jordan and Egypt, the religious leaders of the region have truly embraced the platform, and made it their own. We are proud to support them in their work. Their example of interreligious cooperation, of coexistence and mutual understanding will surely act as an example to the millions of people who follow them.”

The members of the platform are already collaborating with each other and with KAICIID on a series of joint initiatives, including:

Waseem Haddad, the KAICIID programme manager for the Arab region said: “This is an especially significant development, because with this new shared curriculum, students of religion all over the region will have the chance to learn about other religions, from representatives of those religions directly, in a dialogical way. We think this will be a significant contribution to interreligious understanding.”

They also agreed to work together on a training programme for journalists reporting on religion.

“In a region where there is tremendously diverse media, and where media can have a huge influence in the perception of religious adherents, it is important that journalists be trained to report sensitively on religion and interreligious dialogue,” said Haddad.

The members of the Network also agreed to arrange exchange programmes between their respective institutions, with the first such visit being arranged between Balamand University in Lebanon and University of Ez-Zitouna in Tunisia. Professors from the network will travel to each other’s institutions and teach there, in a unique example of interreligious cooperation in education. 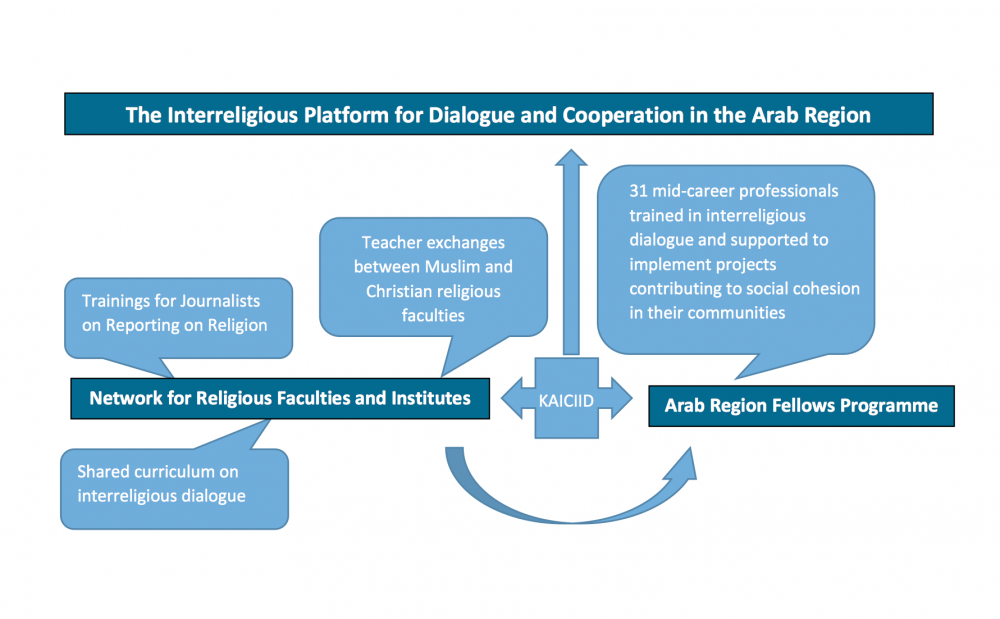 Sheikh Dr. Allam said: “From the foundation of the platform in Vienna, Austria, we are now seeing its implementation on the ground through this (Fellows) training, which is more than a training. It is a professional meeting among key people in this field (of education). Education is a lifelong process, and not only imparted in classrooms but also in meetings like this. The Dar-Al-Iftaa highly appreciated KAICIID’s great role in promoting dialogue and coexistence in the region, and looks forward to the role that will be played by the platform to spread a culture of dialogue and cooperation between Christians and Muslims in the region.”

Pope Tawadros confirmed the words of Dr. Allam, stating that “KAICIID increases human wealth by spreading the culture of dialogue and promoting coexistence. The Coptic Church salutes the Center and its activities and appreciates its advocacy for dialogue. KAICIID’s work undoubtedly contributes to building world peace.”

The first Regional Dialogue Platform for Religious Leaders and Institutions for the Arab Region is the first, transnational, Christian-Muslim platform to advocate for protecting and preserving the rights of all religious communities in the Arab world. Senior religious leaders from across the Arab region are actively supporting this platform in order to speak up in one voice for common citizenship rights and an end to prejudice, exclusion, hate speech and violence. The umbrella platform teams up high level Muslim and Christian religious leaders to address the toughest challenge their communities face: religious communities are uprooted, suffering genocide, exclusion and impoverishment. The platform allows religious leaders to connect with policy makers in the region.

At present, 23 institutions are part of the platform. This number is expected to increase.