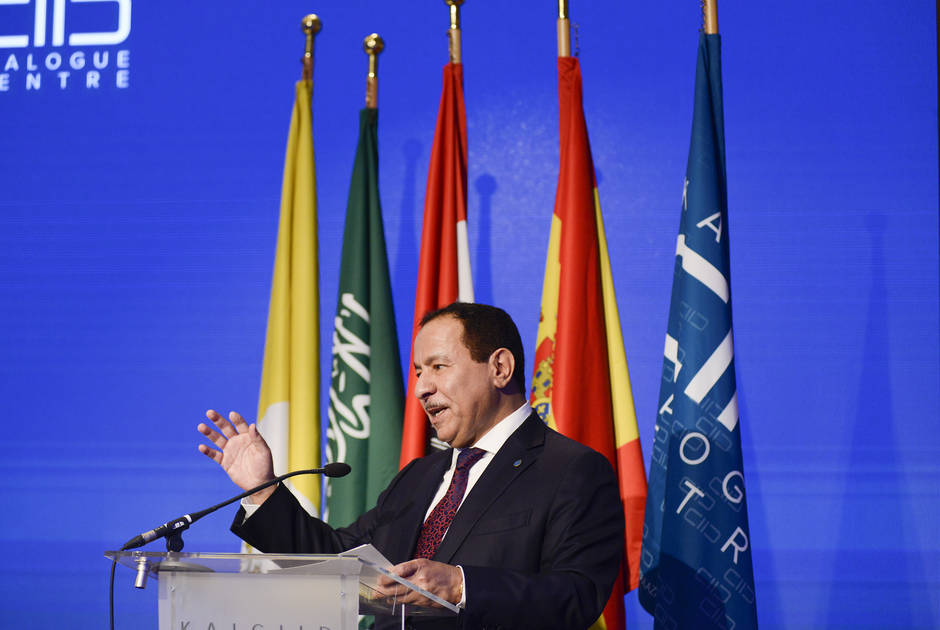 The Power of Words: The Role of Religion, Media and Policy in Countering Hate Speech”

On behalf of the International Dialogue Centre (KAICIID), welcome!

Your Excellency Dr. Fischer, we are honored by your presence at the opening of this international conference; both as a distinguished international figure …. and as a long-standing friend.

I would also like to extend a warm welcome to His Royal Highness Prince Abdullah bin Khalid bin Sultan Al Saud, Ambassador of the Kingdom of Saudi Arabia to the Republic of Austria. We are immensely grateful and appreciative of the Kingdom’s steadfast support for the work of the Centre

Congratulations are also due to His Excellency Cardinal Miguel Ayuso Guixot, Member of the KAICIID Council of the Parties and Board of Directors, who was recently elevated to the College of Cardinals by His Holiness Pope Francis at a ceremony I was privileged to attend at the Vatican.

I would also like to convey my continued appreciation and gratitude to His Excellency Juan Sunye Mendia, Ambassador of the Kingdom of Spain, for Spain's unceasing support for KAICIID, and to my dear friend, Her Excellency Ambassador Dr. Teresa Indjein, Director of International Cultural Relations at the Ministry of Foreign Affairs of Austria. Particularly, I extend my sincere gratitude to the Austrian Ministry of Foreign Affairs for facilitating and securing the visa for the participants of the conference today.

I would also like to thank all the members of the KAICIID Board of Directors who, as representatives of the Jewish, Christian, Muslim, Buddhist and Hindu faiths, embody interreligious dialogue as part of our governance structure and who are participating in this conference.

Lastly, I would like to thank His Excellency Sheikh Abdallah bin Bayyah, a man of dialogue and a messenger of peace, who so kindly accepted to grace us with his presence and valuable time at this conference.

Language is the basic tool of communication shared by all humanity.

The whole spectrum of human endeavour and interaction is governed by what we say, when we say it and how we say it.

Language has the power to move the soul, as with the Shakespearean sonnet, or softly-chanted Bedouin poetry.

But language is also double edged.

Rhetoric can inspire, but it can also incite.

Polemic can challenge and open up public debate, but it can also attack and marginalise.

Satire can inspire laughter and light heartedness, but it can also mock.

With the wonderful gift of language comes a responsibility to use it wisely and for the common good.

Many here, from international religious, educational and policymaking backgrounds, will know all about the power of media, especially digital communications, in shaping politics, society and religious discourse.

The language of hate, directed at people or groups based on their religion, ethnicity, gender or other identity factor, has been propagated and magnified by digital means.

Atrocities committed by extremists all over the world are now routinely subjected to studio-quality media treatments and sent globally as recruitment tools and vivid statements of murderous intent.

It is a sign of our times that the extremist killers of today are increasingly bringing digital cameras, as well as instruments of death such as guns and bombs and knives, to the scenes of their atrocities.

But hate speech is not just a 21st Century problem, powered by the interconnectedness of the digital age which has given any individual with a smartphone access to a public conversation between billions of people.

Hate speech is an older phenomenon and has helped shape some of the worst atrocities afflicting mankind.

In 1994 in Rwanda for instance, before the onset of the digital age, nearly a million minority Tutsis were wiped out in a few short months, partly in response to media incitement on traditional platforms such as radio.

In 1992, in the former Yugoslavia, the world witnessed crimes against humanity on a huge scale and an ethnic cleansing campaign targeting mainly Bosnian Muslims.

In the last Century millions of Jews were killed in Europe through a toxic and shared cocktail of nationalist rhetoric and race-based incitement.

As is so often the case, the pursuit of power comes at the expense of those groups or individuals wrongly identified as a common threat to society.

We are here today to exchange ideas on the nature of hate speech – how to define it, how to recognize it and finally how to fight it.

I would ask you to ask yourselves and each other the following key questions in all three spheres:

Religious leaders – What are you doing to promote dialogue and tolerance so that Faith can never be used as a tool to target minorities or those who practice religion in a different way?

Media players, including all those who use social media – What duty of care do you demonstrate towards preventing the spread of content which might lead to the marginalization of others?  When the audience you serve tempts you to take on an extreme position that singles out individuals or groups, when and how must you resist?

Policymakers – At what point, if at all, should the powerful principle of freedom of expression give ground to legislation or other top-down methods to prevent hate speech and incitement?

I hope, through our speeches, panels and workshops during this conference, that we will end up with a clearer understanding of the harmful effects of hate speech and the incitement to violence it can lead to.

I hope, in sharing our experiences, that best practices aimed at preventing the misuse of words will emerge.

One final meditation before I finish:  we cannot deal with hate speech without first trying to understand the nature of hate itself.

Those from Abrahamic backgrounds will recognise in the story of the First Parents a driving desire for self-determination – a seeking of power over and above the settlement offered to us by God.

I believe it is this human thirst for power that can sometimes lead to hate, because hate - from the killing fields of Cambodia to the mass graves of Srebrenica to the concentration camps of wartime Europe – has been used to secure power through persuading people that they are threatened by a common enemy – be it Jews, Muslims, those of a different tribe or political and social persuasion.

In these cases and in so many others, the accumulation of power lies in persuading people to hate others.

We live in times of increased political populism, where mistrust of the other is used as a means to unite and where groups that belong on the fringes have been allowed to take centre stage.

Your task as delegates today is to examine ways of reclaiming this gift of language for good rather than allowing it to be abused as a means of spreading discord and unhappiness.

For our part we at KAICIID will continue to introduce and foster programmes across our operations in the Central African Republic, Nigeria, The Arab region, Myanmar and Europe aimed at fighting the language of hate.

To this end, our programs next year will include closer cooperation with the United Nations and other international organizations to counter the grave effects of the language of exclusion at all levels of society

Project
The Power of Words: The Role of Religion, Media and Policy in Countering Hate Speech