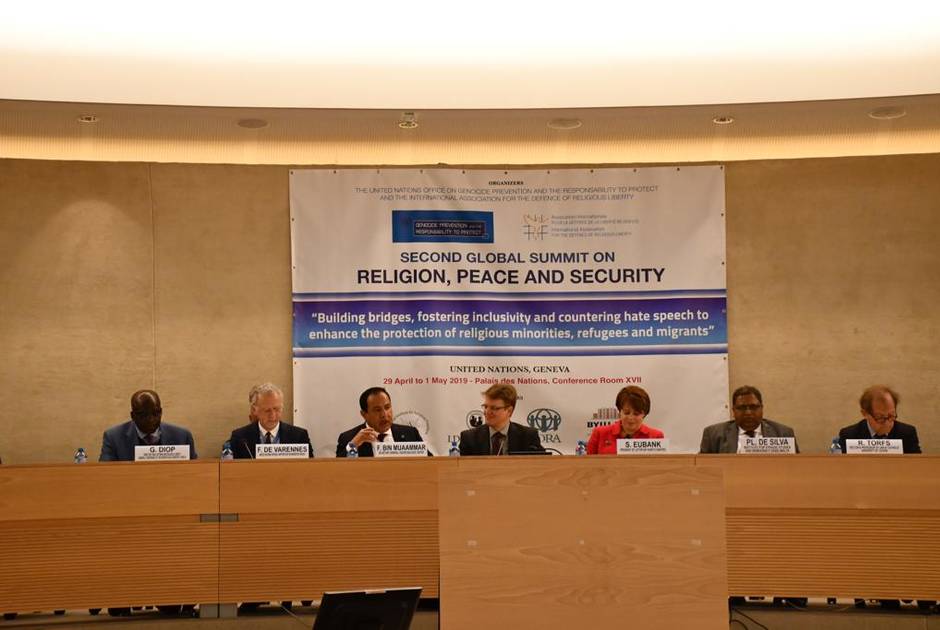 TO ENHANCE THE PROTECTION OF RELIGIOUS MINORITIES, REFUGEES AND

Your Excellencies, ladies and gentlemen,

Thank you for the kind invitation to participate in this important gathering.

I would like to begin my remarks by expressing my personal sorrow at the recent events: the attacks on worshippers at a mosque in Christchurch, New Zealand, the tragic series of suicide bombers who targeted churches and hotels in Sri Lanka and the attack on the synagogue in San Diego. More than 300 innocents lost their lives during these incidents. My deepest condolences go to the victims' families and loved ones.

There are not many similarities between the two incidents: the first targeted Muslims, and was carried out by a lone perpetrator who was motivated by right-wing extremism. In Sri Lanka, we saw a coordinated, cross-border terrorist enterprise which was sophisticated, well-financed, and combined international networks with domestically active militias to target the Christian community on a day of worship.

On the other hand, these two incidents, coming so close together, were a chilling reminder of a new reality: that religious minorities are increasingly being targeted for their beliefs, in the very places where they should feel most at home, and safe, that is, their houses of worship.

Nor are Muslims and Christians the only victims: we must remember the attack on the synagogue in Pittsburgh, in the United States. There has been a significant rise in attacks and vandalism targeting mosques and refugee centres across Europe, churches and synagogues in France.

Nor is violence the only symptom, although it is the most visible and worrying. We have witnessed in recent years a dramatic rise in anti-Semitism and anti-migrant rhetoric across most of the western countries.

Hate speech is on the rise, and perhaps more worryingly, it is entering the mainstream of political spectrums across the world.  The language and terminology of exclusion, marginalization and othering are finding their way into election campaigns across the world. And if we do not act, there is a credible possibility that such language will become normalized.

What all these warning signs have in common is that they all target religious minorities, refugees, the newly arrived: those segments of the population which tend to be most vulnerable and most deserving of protection.

There is a chilling global similarity in these trends: the Christchurch attacker may have been acting alone, but he took inspiration from right-wing message boards and groups which were dispersed across the world, but found their gathering place on social media. In Sri Lanka, a terrorist group that has its roots in the Arab region was able to mobilise educated young men to commit these heinous attacks as “revenge for the deaths of Muslims in Christchurch”, even though probably not one of those innocent worshippers, or indeed the perpetrators, had ever even set foot in New Zealand.

What does that mean for us, today, as we discuss how policymakers and religious leaders can best mobilize their resources to protect these groups? How does one protect against an adversary who knows no national boundaries, and can fundraise and recruit supporters globally on the internet?

I think that we all agree that our response must be global and inclusive as well, and needs to focus on the combating of extremist rhetoric.  And by this I do not only mean the rhetoric of extremist groups, but also more subtle forms of exclusion and discrimination. How can we do this? I would like to propose four ideas from our work, but before, allow me to explain how KAICIID is unique:

KAICIID is an intergovernmental organization founded by Austrian, Saudi Arabia, Spain and the Holy See as founding observer

KAICIID is, in its structure and mission, both an intergovernmental and multi-religious organization, is an example for commitment to preserving religious and cultural diversity. Our Board of Directors is composed of nine representatives of five major religions.

We believe that religious voices and especially faith based organizations are voiceless in many policy circles or have too much involvement in politics in other societies.

We believe that without this dialogical Space to engage religious and non-religious civil society groups, the principle of inclusivity and sustainability will not be achieved.

Based on our work, I have the following four ideas:

We should act collectively, not individually. We must work together to develop common global strategy and local tools to enhance the values of peace, tolerance and respect for human dignity. And what a better place than the UN to coordinate our efforts to spread the message of peace and combat the message of hate and exclusion.

Creating counter-narratives and role models: By presenting visible models of interreligious cooperation, we make it harder for extremists to stereotype refugees and migrants, or associate them with violence. Religious communities working together send a powerful message of the strength that lies in solidarity. We have been able to build interreligious platforms to this end in Nigeria, Myanmar, the Central African Republic, and in the Arab region. In Europe, we support the Muslim Jewish Leadership Council, which brings together representatives of European Muslim and Jewish communities. The platform has the dual effect of building bridges between these two communities, and also allowing them to organize around common challenges.

I hope we, together, can insure that these lessons improve our future and joint work with both religious and policy leaders.

Thank you for your attention.