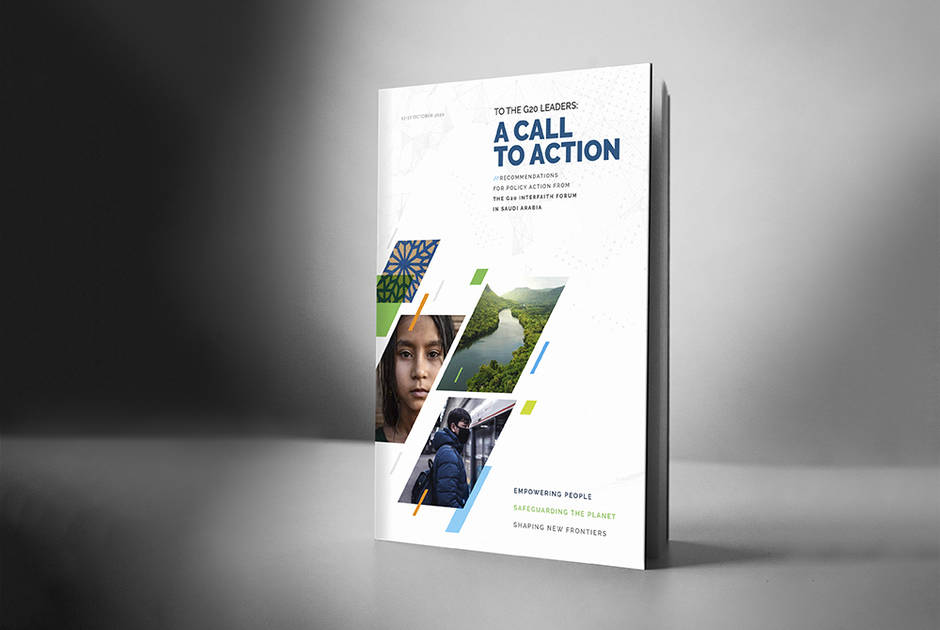 Riyadh, Saudi Arabia, Nov. 17, 2020 — Faisal Bin Muaammar, Secretary General of the International Dialogue Centre (KAICIID), delivered today a report to Dr. Fahad Almubarak, G20 Sherpa, with findings on priority recommendations for consideration by the G20 Summit leadership at its Nov. 21 and 22, 2020 meetings, hosted by the Kingdom of Saudi Arabia.

The recommendations present ways for policymakers to work together with religious actors to tackle global problems such as COVID-19, climate change, inequality and poverty. They are the result of months of consultations with hundreds of religious representatives, policymakers and experts from around the world, and call on policymakers to recognize the invaluable contributions of religious communities to peace and development, and to work with them to solve global challenges.

“The G20 is the foremost venue for economic and political cooperation to solve global challenges like COVID-19, climate change, and inequality,” bin Muaammar said.

“I commend Saudi Arabia’s G20 Presidency for their commitment to engaging and partnering with religious communities and interfaith dialogue to solve these challenges, through the G20 Interfaith Forum 2020, and call on the G20 Leaders’ Summit to acknowledge the importance of religious communities as allies and partners in development by giving them a seat at the policy table through recognition as a formal engagement group to the G20 Process,” he added.

“Never before have we seen a more urgent need for religious communities to work with political leaders to address the unprecedented and interrelated challenges facing the world today,” said Professor Cole Durham, President of the G20 Interfaith Forum Association and Founding Director of the International Center for Law and Religion Studies. “If implemented, the collaboration recommendations provided to G20 Summit leadership will help us empower people, safeguard the planet and shape new frontiers.”

The report was the culmination of months of regional consultations on some of the most pressing challenges facing the human development agenda, particularly in the Middle East, Europe, Latin America, Africa, Asia and North America, involving hundreds of religious leaders and experts across a wide variety of religions.

Perspectives from these consultations were brought last month to the G20 Interfaith Forum itself, involving more than 2,000 prominent religious actors, including a broad spectrum of the world’s religious communities and leading officials and experts from international organizations, governments, academia, and civil society.

The G20 Interfaith Forum offers an annual platform where networks of religiously linked and faith-inspired actors engage on global agendas within the broad framework of the United Nations Sustainable Development Goals (SDGs).  It calls upon the world’s political leaders to include religious actors in the policymaking process, building policies based on shared values of solidarity, coexistence and respect.

The report delivered to Dr Almubarak asked the G20 Summit leadership to consider five areas of focus that had arisen from the G20 Interfaith Forum process, including issues such as COVID-19, advancing peace and conflict resolution, empowering women, reducing structural inequality and racism, and protecting the planet.

In 2020, the G20 Interfaith Forum recommends that the G20 Summit support more active collaboration between public and religious institutions with an urgent focus on the following areas:

•  Act with religious communities in meeting urgent needs of especially vulnerable communities, including refugees and IDPs, scapegoated communities, and women and children

•  Collaborate with religious communities to combat structural inequality and racism

4. Engaging in common action to protect the planet

•  Action in support of the Paris Climate Change agreement

The G20 Leaders’ Summit brings together world leaders to discuss international economic cooperation and broader social concerns. The participants in the G20 Summit are Heads of State or Government from 19 countries and the European Union. In addition, leaders of guest countries and representatives of invited regional and international organizations participate in the Summit.

Convened each year in the host country of the upcoming G20 Summit, the G20 Interfaith Forum offers an annual platform where a network of religiously linked institutions and initiatives engage on global agendas. The goal of the meetings is to contribute meaningful insight and recommendations that respond to and help shape the G20 Summit and thus global policy agendas. The 2020 G20 Interfaith Forum agenda builds on the UN Sustainable Development Goals and additional issues of social cohesion, equity, and sustainability that have been a central underlying theme for the Forum from its inception.

Established in 2005, the United Nations Alliance of Civilizations (UNAOC) is mandated by the UN to improve relations between societies and communities of diverse cultural and religious backgrounds. Through its various programmes and activities around the world, UNAOC works to foster intercultural and interreligious dialogue to bridge divides and overcome prejudice, misconceptions, misperceptions, and polarization.

The G20 Interfaith Forum Association offers an annual platform where a network of religiously linked institutions and initiatives engage on global agendas (primarily and including the Sustainable Development Goals or SDGs). The annual G20 Summits are a critical time and place where priority global issues are considered. Our goal is to contribute meaningful insight and recommendations that respond to and help shape the G20 and thus global policy agendas.

The National Committee for Interfaith and Intercultural Dialogue is a government entity in Saudi Arabia that was established in 2016. Its mandate includes planning and designing programmes that aim at enhancing the Kingdom's initiatives for interfaith and intercultural dialogue. Members of the committee include representatives from various government ministries and dialogue institutions based both in Saudi Arabia and around the world.