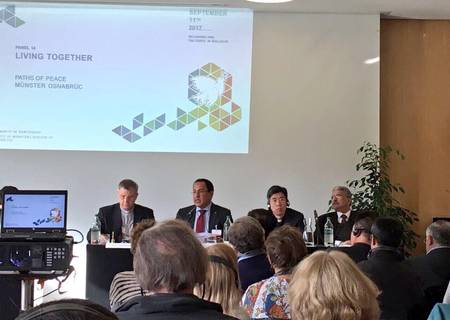 Speaking at the Sant’Egidio International Meeting of Prayer for Peace in Münster, Germany, yesterday, Faisal Bin Muammar, KAICIID Secretary General called for more and sustained dialogue between religious leaders and policy makers to solve the crisis of displacement. Calling it the “most immediate humanitarian challenge we have now on a scale not seen since the last global war”, the Secretary General recommended dialogue to “help people develop deeper understanding of the principle that solutions to great challenges cannot be found by closing seas, building walls, or sending people back into the arms of those they fled.”

The Sant’Egidio International Meeting of Prayer for Peace is an annual gathering of the highest-ranking religious and political leaders from around the world, including, this year, the Chancellor of Germany, Angela Merkel, the President of the European Parliament, Antonio Tajani, the Grand Imam of Al-Azhar, Ahmad Mohammad al-Tayyeb, John X, Greek Orthodox Patriarch of Antioch and all the East (Damascus), Cardinal Dieudonné Nzapalainga from the Central African Republic, Cardinal John Olorunfemi Onaiyekan and Sultan Al Hajji Muhammad Sa'ad Abubakar III from Nigeria, and others.

In his speech, Bin Muaammar highlighted the need for cooperation between religious communities and policymakers. “When we work in isolation from each other, we can only see and solve part of the problem”, he said.

“More needs to be done to ensure that we are all, religious leaders and policymakers, working towards the same goals. That our strengths are being used effectively, and we are avoiding duplication in our efforts. It is only when we work together that we can defeat terrorism, poverty, and hate.”

The Secretary General highlighted several successful examples of interreligious and religious-policy dialogue from KAICIID’s work, including the launch, in July, with the United Nations, of the first action plan specifically designed for religious leaders seeking to prevent hate speech and incitement to violence.

“In the Arab region, KAICIID is convening the first network of theological and Sharia faculties, whose members are working on developing a shared curriculum on interreligious dialogue. Our hope is that the next generation of scholars and leaders in the Arab region will be equipped with the knowledge of dialogue that they need to build peace, and be more active in endorsing common citizenship for all components of Arab societies.

In Nigeria, we are proud to support the efforts of Cardinal Onaiyekan and Sultan Sa'ad Abubakar (who are here with us today), to strengthen social cohesion in the country, through a platform where people of all religions can cooperate for the benefit of the country.”

The Secretary General invited the participants of the meeting, who include the highest-ranking religious leaders and policy makers from around the world, to draw on KAICIID’s unique expertise and experience in dialogue to create more opportunities for dialogue: “KAICIID’s unique structure is an answer to a special need. The need for constructive, equal cooperation between religious communities and governments.

In February 2018 we will convene a meeting in Vienna to review our progress in supporting dialogue to preserve diversity in the Arab region. We are working intensively to launch a platform for cooperation among religious leaders and policymakers in the region.  The purpose of the platform is to create a space where religious leaders, the international community, and national and regional governments can dialogue on sustainable solutions on the path to peace in the Arab region.”