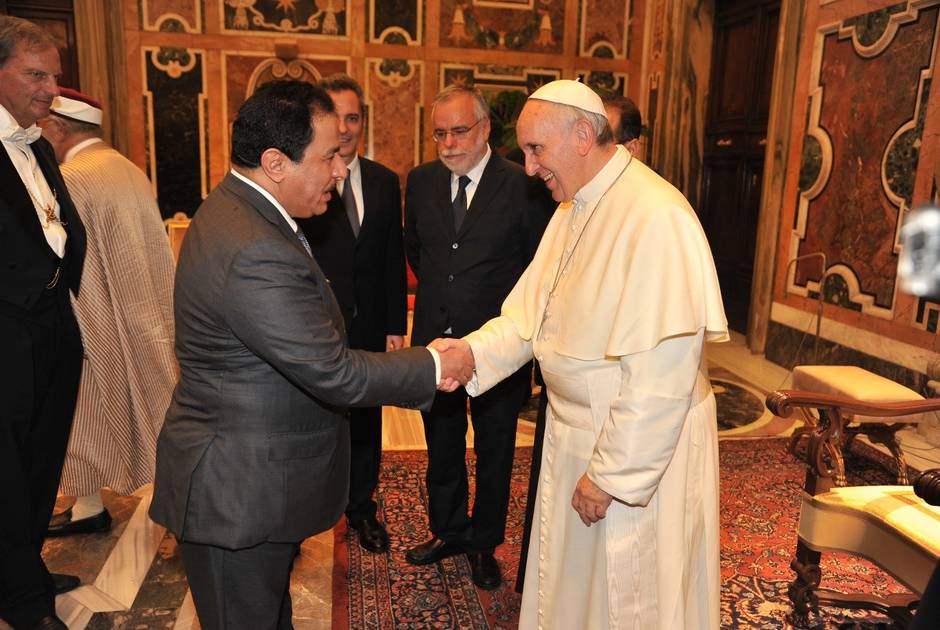 From 29 September to 1 October, the Secretary General of the King Abdullah Bin Abdulaziz International Centre for Interreligious and Intercultural Dialogue, Faisal Bin Muaammar, together with members of the Centre’s Board, took part in the International Meeting for Peace organized by the Community of Sant'Egidio in Rome. Under the theme of "The Courage to Hope: Religions and Cultures in Dialogue”, the gathering welcomed religious leaders from every part of the world for days of dialogue and combined prayers for peace.

“There can’t be peace without dialogue”, said Pope Francis, leader of the Roman Catholic Church during the convention.

The Secretary General was amongst a group of international figures, many of them high-level religious leaders, who were invited for a private audience with Pope Francis and the opportunity to exchange a personal greeting with His Holiness.

In addition to his participation in the papal audience, the KAICIID Secretary General was amongst the intercultural and interreligious dialogue experts to engage in panel discussions in the frame of the Peace Meeting. He spoke in a panel titled “The Power of Prayer throughout History”, chaired by Ignazio Sanna (Catholic Archbishop, Italy). The distinguished panel included Avichai Apel (Rabbi of Dortmund, Germany), Denys Jean Kawak (Orthodox Archbishop, Syrian Church), Ole Christian Mælen Kvarme (Lutheran Bishop, Norway) and Brian C. Stiller (Global Ambassador for the World Evangelical Alliance, USA).

Addressing the packed assembly in fluent Arabic and English, Secretary General Bin Muaammar reiterated the Dialogue Centre’s core message: “Dialogue is what helps us understand each other and respect the distinctions amongst us as followers of different religions. At the same time, it connects us – and allows us to come together around our numerous commonalities. Only by talking to one another can we effectively unite around the shared goal of promoting the common good.”

Secretary General Bin Muaammar also took the opportunity to specifically highlight that prayer is in one sense the ultimate form of dialogue; as something between mankind and God. He went on to quote the Anglo-American poet (W.H. Auden) who urged that we should each “Pray as though everything depended on God [but] Work as though everything depended on you”. Secretary General Bin Muaammar went on to note “perhaps this can serve to capture the spirit in which I understand to be religious faith’s better place.”

In addition to the Secretary General’s involvement, the KAICIID Board members took part in several panel discussions over the course of the Peace Meeting. Rabbi Rosen joined the panel titled “Religions Respond to Violence against Women”; Swami Agnivesh took part in God Loves the Poor and Mohammad Sammak was engaged in discussion on “Crisis in the Middle East”.

To end the event, the assembled leaders gathered at the Piazza del Campidoglio, after a time of prayer, for a Peace Procession. The captivating closing ceremony brought together all participants once more, during which time important narratives of cooperation between faiths were highlighted. The final two acts of the event were the signing of the Appeal for Peace by all delegates, followed by a lighting of candles.

Speaking after the Peace Meeting, Secretary General Bin Muaammar said, “This has been a profoundly moving experience. I feel truly honoured to have been part of the private audience with His Holiness. More than that, I’ve found the opportunity to meet high-level representatives from such a diverse range of religious communities to be truly enriching. The intense discussions and lively exchange of ideas were wonderful and it was a pleasure to have this occasion to introduce the KAICIID Dialogue Centre. I was glad for the chance to share our vision with so many.”

Secretary General
Board of Directors

20 November 2015
“Religion is not imaginable without responsibility”: Cardinal Schönborn at KAICIID
END_OF_DOCUMENT_TOKEN_TO_BE_REPLACED